Whilst one day is never enough time to explore a city, if you’ve only got 24 hours in San Antonio, Texas you can still pack in a lot!

San Antonio is a really fun city and in just one day you can walk along the famous Riverwalk, visit and learn about The Alamo and it’s importance and significance, go on the Mission Trail, visit the largest Mexican market outside of Mexico and many more things!

Here are the things you shouldn’t miss if you only have 24 hours in San Antonio! 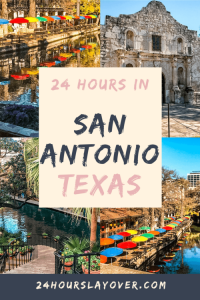 If you have more than 24 hours in San Antonio and have visited all the places mentioned in this guide, you can also check out the 20 best things to do in San Antonio!

Where to stay in San Antonio

As San Antonio is a very large city (7th most populated city in the United States with 1.5 million people living there!), if you only have 24 hours here you’ll want to make sure you’re staying in downtown close to all the main tourist destinations. 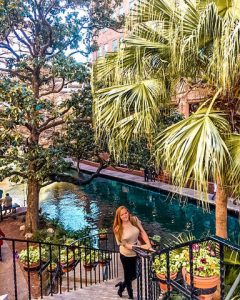 Pick a hotel near The Alamo and The Riverwalk for your convenience. You may also want to consider a central hotel with an indoor pool in San Antonio if you’ll be there during the hot summer months to have a break from the heat.

If you’re travelling with children, luckily San Antonio with kids is perfectly doable and affordable! 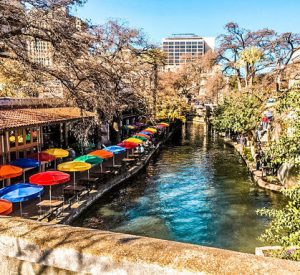 The San Antonio River is a long river, but luckily the part of the river that runs through downtown San Antonio goes around in a big loop. Therefore you can walk the whole downtown loop of The Riverwalk in about 45 minutes.

This part of the river is the liveliest, funnest and most picturesque part. It is adorned with lots of restaurants full of character, as well as plenty shops, museums and hotels.

Many of the restaurants are Mexican/Tex-Mex restaurants and the food is very very good! Often people will be queueing outside to get a seat at the weekends! There are lots of other cuisines to choose from though if you don’t fancy Mexican food.

Schilo’s Delicatessen, located on East Commerce Street just behind the riverwalk is an iconic place to go for food. It is the oldest restaurant in San Antonio and specialises in German food and great breakfasts! 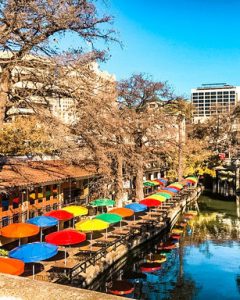 There is such a nice atmosphere along the river and you’ll find it hard to not take pictures, especially of the iconic coloured umbrellas at Casa Rio Mexican Restaurant.

Walk over the bridge at West Market Street for the perfect aerial view over the river and the coloured umbrellas of Casa Mia.

You can also take a boat tour down the river if you fancy. It takes 35 minutes and the guide will explain a lot about the local area. Most people however, prefer to just walk the River Walk. 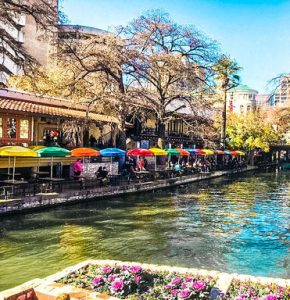 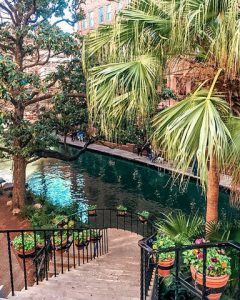 Even if you’re only in San Antonio for 24 hours you still need to know a little bit about the history of Texas to understand why San Antonio plays an important role in it. I’ll try to keep it as quick and as simple as possible for you!

Texas and a few other states (New Mexico, California, Arizona, Nevada, Utah, as well as parts of other neighbouring States) once used to belong to Mexico. And Mexico had in turn belonged to Spain.

The Spanish rule ended when Mexico separated from Spain during the Mexican War of Independence on September 16th 1810.

16 years later however, Texas wanted to break away and gain independence from Mexico, mainly because they did not agree with the laws made by General Antonio Lopez de Santa Anna (often referred to simply as Santa Anna), Mexico’s President.

This led to The Battle of the Alamo (read in detail about the battle below).

Later in 1836 The Texas Revolution granted Texas independence from Mexico and it became it’s own country – The Republic of Texas. Texas stayed a country for 9 years, and then in 1845 it agreed to join The United States of America.

Along with the riverwalk, many people come to San Antonio to visit The Alamo. The Alamo is an absolute must see during your 24 hours here in San Antonio.

The main building of The Alamo is actually a chapel built for the Mission San Antonio de Valero. The Church was built in the 18th Century by Spanish Franciscan friars in order to convert the native Indian Americans to Catholicism. 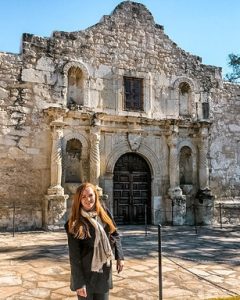 The Alamo is known worldwide as it was the site of a very important battle “The Battle of the Alamo” between Mexico and Texas in the Texas Revolution.

The Republic of Texas was fighting against Mexico in a bid for independence from them.

Santa Anna, the President of Mexico commanded 1,800 Mexican soldiers to storm The Alamo (which during the Revolution was being used as a fort) and attack the Texan soldiers defending it.

The battle lasted for 13 days (February 23rd to March 6th) in 1836 and ended brutally with the Mexicans killing all 187 of the Texan soldiers inside The Alamo and therefore winning the battle.

Despite Texas losing the battle, later that year they won their struggle for independence from Mexico. 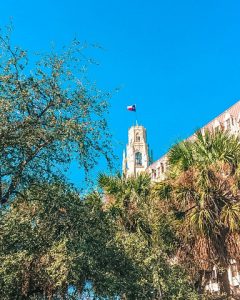 The Alamo is very close to the Riverwalk – it can be reached by foot in just a couple of minutes!

It is a very busy place so it is best to get there at the beginning or end of the day to avoid the crowds. Allow yourself at least 1 hour here.

It is free to go inside The Alamo and wander round by yourself. You can do a self guided audio tour or a guided tour by a ranger for $15 to get a deeper understanding.

Click here to learn more and reserve your spot (guided tours need to be reserved 24 hours in advance).

What surprises a lot of people visiting is how small the area of The Alamo is, seeing as such a big battle was fought here.

Of course it doesn’t help that it is surrounded by many modern high-rise buildings which definitely seem to dwarf it and make it appear smaller.

You can take pictures on the grounds but inside the actual Alamo chapel you cannot take any pictures. Nevertheless it was absolutely incredible to be inside somewhere that has such an important place in American history. 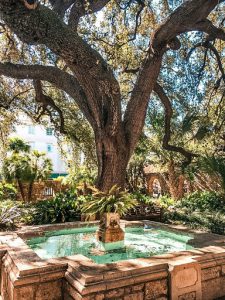 Along with The Alamo there are 4 other Missions in San Antonio also built to convert to local people to Catholicism.

The Alamo is the most popular one, but you can visit the other ones too: Mission San Juan, Mission San Jose, Mission Concepcion and Mission Espada. Together they form The Mission Trail.

How to do the Mission Trail

Very conveniently there is a public bus that goes to all the destinations on the Mission Trail plus several other sites!

An unlimited day pass costs just $2.75 (you can buy tickets on the bus). Click here for more information on the buses and click here for the bus schedule and the bus route.

Mission San Jose is also one of the closer Missions to The Alamo so it won’t take you too long to get here on the bus.

Of course being so close to Mexico you’ll find lots of Mexican things here in San Antonio. The food is the main thing, but you’ll also find lots of artisan Mexican shops and stalls!

The Historic Market Square is a popular Mexican market within walking distance of The Riverwalk.

It has over 100 independently owned local shops selling Mexican artisan gifts and is the largest Mexican market outside of Mexico! It is certainly worth a visit!

About a 15 minute walk from The Alamo is The Historic District of La Villita. La Villita “little village’ is where the Spanish soldiers who were stationed at The Alamo lived.

It resembles a Spanish colonial village and there are lots of art galleries and shops here – it is a really pleasant area to stroll around.

The King William Historic District is just south of Downtown. It was first settled by Germans immigrants in the 1860’s and they built lots of grand houses here – some of the finest in the whole of the United States!

This is a really beautiful part of San Antonio to explore and you’ll get to marvel at all the Gingerbread Houses here!

The Japanese Tea Garden, also known as The Sunken Garden is a popular place for both locals and tourists. There are really nice gardens and walkways here, plus a waterfall, Koi ponds and arched bridges.

When is the best time to visit San Antonio?

Whilst the summer months (June-August) are the busiest months, they can often be too hot here! In autumn, spring and winter the temperatures are a lot more pleasant and hotel prices can often be a lot cheaper as there are less tourists.

I went to San Antonio in January and whilst I was wearing a light jacket, the sun was shining and it was very pleasant.

Therefore always remember to bring suncream here, especially if you are visiting in the warmer months. 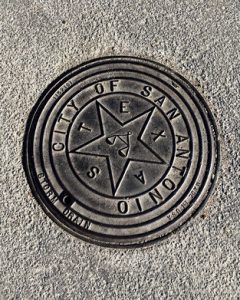 How to get to San Antonio

Unless you are doing a road trip most people reach San Antonio by plane. Many regional carriers (Delta, United, Southwest and American Airlines) operate into San Antonio International Airport (SAT).

If you are coming from neighbouring Austin you can get the bus or train which takes about 4 hours. Austin is also a great place to go in Texas for a long weekend and is definitely somewhere you should include on your Texas itinerary!

Out of all the 50 US States Texas is definitely up there as one of my favourites! I have been to Texas a few times and just love the laid back atmosphere and all the history here, plus people are so friendly here!

If you’ve never been in the Deep South before you might find this hard to believe as the media will often portray a totally different idea of what Texas is like.

If you are heading to Texas also make sure to check out Fort Worth (near Dallas) to meet some real cowboys and experience the true Wild Wild West! 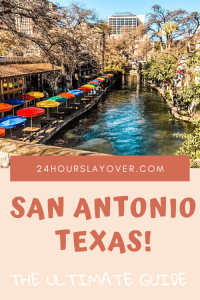