Abu Dhabi and Dubai are just over one hour’s drive apart from each other and you can easily get from one city to the other by bus.

Whilst it does take a little longer than a taxi, taking the bus between the two is a great option to save some money.

In this blog post I’ll show you where to take the bus from in both Abu Dhabi and Dubai, the bus timetables, bus fare, how long the bus takes and what you can expect on the bus!

I’ll also explain abut the FREE EMIRATES BUS all you need to know about the taxis and driving in UAE if you decide to travel that way instead! 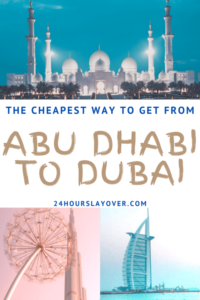 Below I have linked some Abu Dhabi and Dubai articles to help you plan your trip to these cities.

Where is Dubai?
The Most Instagrammable Places in Dubai
A Complete Guide to Abu Dhabi

Taking the bus from Abu Dhabi to Dubai

Buses depart 7 days a week roughly every 20 minutes and there is no need to buy your ticket in advance as there is always space.

Just head to the counter that says ‘Dubai’ inside the bus station to pay for your ticket and then wait for the bus outside at the bus stand on the left (it is a red coach).

When you get on the bus give your ticket to the ticket collector.

Buses run from 5 am until midnight. The journey costs 25 dirhams (£5). This is in comparison to an average of 200 dirhams (£40) for a taxi between Abu Dhabi and Dubai. 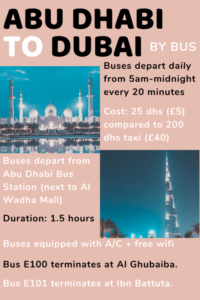 Before you get on the bus you need to know which station you want to get off at. This is because both stations are at completely opposite sides of Dubai (they are 35 km apart).

Ibn Battuta is the closest of the two stops to Abu Dhabi – located a short distance from The Palm and Dubai Marina.

Al Ghubaiba on the other hand is at the far side of Dubai near Deira, Old Dubai (Al Fahidi/ Bur Dubai ) and Dubai International Airport.

See the below map, sourced from Google maps to see the distance between the two. It roughly takes 35 minutes to travel from Ibn Battuta Bus Station to Al Ghubaiba Bus Station.

Most people choose to get off at Ibn Battuta and then take the metro or a taxi from here to wherever they want to go but it totally depends on where you are planning to go.

If you want to get off at Ibn Battuta you can take either the E100 or E101 bus, whichever comes first! 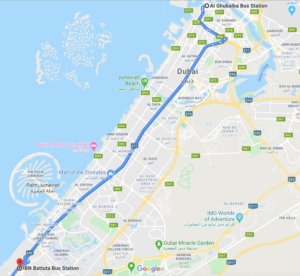 If you are going from Abu Dhabi to Al Ghubaiba (the furthest stop) the journey will take you just over 1 hour 30 minutes.

In the last few months, a new bus service E102 has been added that connects Musaffah (Abu Dhabi) to Dubai.

Musaffah is not a touristy area of Abu Dhabi – it is a residential area and is located about 30 minutes drive from downtown Abu Dhabi. This bus does not stop at Abu Dhabi Bus Station.

Taking the bus from Dubai to Abu Dhabi

To get the bus to Abu Dhabi from Dubai you can either head to Al Ghubaiba Bus Station or Ibn Battuta Bus Station.

Again, buses depart daily from 5am until midnight.

One thing that is different when you take the bus from Dubai to Abu Dhabi is that you need a NOL transport card to ride as the bus operates a cashless system.

You can buy the silver NOL card at the bus station in Dubai for 25 dirhams (but it gives you 15 dirhams free on the card so is in effect only 10 dirhams) and then you just top up the remaining 10 dirhams.

When you get on the bus you tap on so the money is deducted from your card.

*You need a NOL card to get on the bus from Dubai to Abu Dhabi.*

Note a lot of people use these buses to commute so if you arrive at peak times you might have to wait for the next bus.

The bus terminates at Abu Dhabi Bus Station, but you can ask the bus to drop you off at Al Raha Mall (not far from Abu Dhabi International Airport).

It will literally stop on the side of the motorway and you will have to hop over the barrier to Al Raha Mall where you can grab a taxi.

This is handy if you don’t want to go all the way into Abu Dhabi, which will take a further 20 minutes or so.

Best Sheikh Zayed Mosque Photo Spots
How To Get A Cheap Boat Ride To See Burj Al Arab In Dubai!
Where Do Expats Live In Abu Dhabi?

What are the buses between Abu Dhabi and Dubai like?

The buses are all modern, air-conditioned and equipped with wifi.

As a general rule, women sit at the front and men at the back. Lots of expat residents and some tourists use the bus.

There is space under the bus to place any luggage items.

If you have a flight booked with Emirates in Economy you can get the free Emirates bus from downtown Abu Dhabi to Dubai Airport (DXB) Terminal 3 or vice versa, from DXB T3 to Abu Dhabi.

The bus departs from outside the Emirates Airline Office just off The Corniche, Khalidiya.

Buses depart 5 times a day and take just over 2 hours. Click here for the bus timetable. You will need to show your boarding pass to be allowed on the bus.

If you just want to take public transport within Abu Dhabi to get from one area to another however (for example from Saadiyat to The Corniche), you can take the smaller light green buses which serve the local area.

If you are visiting Abu Dhabi just for a few days I wouldn’t recommend you to take the public buses to get around.

Whilst they are modern and inexpensive to ride, they can be time consuming and depending on the weather it can be uncomfortable to wait outside at the bus stop.

Also to be able to ride the local Abu Dhabi buses you must purchase a “hafilat”  transport card at Abu Dhabi bus station beforehand as the buses here operate a cashless system.

This is different than the NOL card used to travel from Dubai to Abu Dhabi. Therefore most tourists to Abu Dhabi use taxis to get around.

To ride a public bus within Abu Dhabi you need a transport card as the buses operate a cashless system.

You do not need a transport card when getting the coach from Abu Dhabi to Dubai (but you do when going from Dubai to Abu Dhabi).

Note there are 2 exceptions when you can pay in cash on the bus in Abu Dhabi.

You can go on these without purchasing a transport card.

Note there is no train service between Dubai and Abu Dhabi. As of 2020 car, taxi or bus is the only way to get from one city to the other.

Naturally taxis are considerably quicker than buses so this is a popular mode of transport for many people to get from Dubai to Abu Dhabi and vice versa, even though it is more expensive.

Taxis in UAE are Government owned and they all have CCTV inside them for safety and security. The driver’s name and identification number are also always visible on the meter for your peace of mind.

It is always a good idea to take a note of this especially if you are travelling alone. Also if you leave something in the taxi, you will be able to get it back if you ring up and are able to identify the taxi.

You don’t need to worry about the driver trying to overcharge you as the meter automatically starts running when you get in the taxi.

It’s not like in some other countries where the taxi driver will try to rip you off because he thinks you’re a tourist.

The same fare is charged to locals, tourists and expats. You cannot barter for a ride – the price on the meter is the price you need to pay.

Taxis are actually quite reasonably priced in the UAE due to the abundance of oil here.

In the Abu Dhabi taxis the fare starts at 5 dirhams (roughly £1). In the Dubai taxis the starting fare is double this.

Not only this, but the Dubai taxis are more expensive than the Abu Dhabi taxis.

A taxi from Abu Dhabi to Dubai will always be cheaper than a taxi from Dubai to Abu Dhabi. The is because both the starting fare and the rate per kilometre is lower in Abu Dhabi taxis compared to Dubai taxis.

You will almost always be able to hail a taxi down on the street, or if not you can use the Abu Dhabi/ Dubai taxi app to order one. Uber is generally more expensive in UAE compared to the Government taxis.

Taxis in Abu Dhabi only take cash currently so make sure you have enough money for the journey. Most taxis in Dubai have the option to pay on card.

One piece of advice:

As someone who lived in the UAE for 3.5 years, I took numerous taxi rides and I have still to find a taxi driver who carried a lot of change and small notes on him.

They always conveniently had ‘just started their shift’ so never had any change, so use your small notes for taxis if possible. Tipping is not necessary but is greatly appreciated.

Another thing to be aware of is that many taxi drivers aren’t always familiar with every location in UAE.

Also because new places are popping up all the time, sometimes taxi drivers may not know where your destination is.

It is always a good idea to have an offline maps on your phone and the complete address so you can show it to the taxi driver so they won’t get lost.

Renting A Car in UAE

You can also rent a car to get from Dubai to Abu Dhabi (or Abu Dhabi to Dubai). It is fairly reasonably priced and there are several car hire companies available at both airports and in the downtown areas of both cities.

However, I don’t really recommend it if you’re only going to be travelling between Abu Dhabi and Dubai a couple of times.

Not only can parking be tricky and expensive (you often have to pay for valet too), but there are many speed cameras in UAE.

It is important to not that there is no speed buffer here, meaning if the road sign says 100 km/h you can’t go faster than this.

Also, driving in the UAE can be challenging even for experienced drivers. The fast cars think they own the lane, and the minibus drivers can be a bit erratic.

If you do want to rent a car just keep alert of the other drivers and you will be okay!

Also something to bear in mind is that toll gates have recently been introduced across 4 of the bridges in Abu Dhabi. Be aware of this if you will be crossing the bridges, as well as how you can pay. 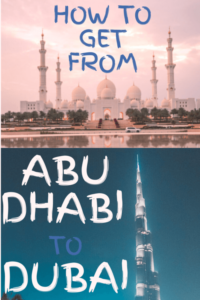 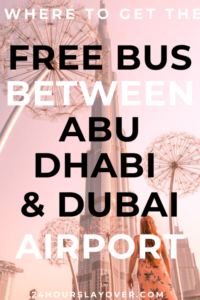 Hi, is there an option to get a bus from Abu Dhabi to Dubai somewhere closer to Abu Dhabi airport? I'll be arriving around 10 PM and I doubt I could make it to the center before midnight.