Flight Attendant hairstyles always need to be neat and presentable for work. Not only from an aesthetic point of view, but also from a hygienic and safety point of view.

There are several hairstyles that Flight Attendants often use. Note that each airline has specific requirements and some hairstyles may be allowed in some airlines but not in others.

Therefore it is always important to look at the individual airline’s Style and Image guidelines. Some airlines are very strict in terms of what hairstyles are accepted, whereas others are a lot laidback providing the hair is neatly out of the face.

Here I will discuss the most popular and accepted hairstyles amongst cabin crew, as well as how to do them! 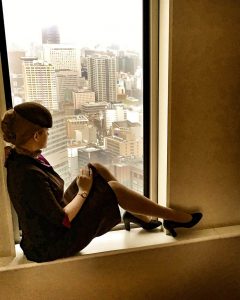 If you’re looking for help on applying to become a Flight Attendant and the Application Process check out these guides:

For your flight attendant assessment day I suggest to arrive with your hair in a bun or a neat French Twist if you are confident doing one.

The hair styles below are the ones that are most widely accepted amongst airlines. At the bottom I will talk about some other flight attendant hairstyles that perhaps some airlines may not approve.

A bun is one of the easiest hairstyles to do to get the hair out of the face and most females will be familiar with how to do a bun.

But there are lots of different takes on the traditional bun from a classic bun to a high bun, a messy bun, a knot bun or a low chignon bun.

Buns can be plaited or twisted and can be secured with a scrunchie, hair clips, grips (bobby pins), a hairnet or a thin hair tie.

Note some airlines only allow specific types of bun.

For example, the main airlines in The Gulf only allow buns that are eye level or lower, whereas airlines in Europe on the other hand are more laid back and allow high buns and presentable messy buns.

Also bear in mind if your flight attendant uniform requires you to wear a hat. In which case you may not be able to do a high bun as it will probably not fit underneath the hat, so you may be limited by the type of bun you can do.

Looking for more information on Flight Attendant Requirements? Check out these articles:

My personal favourite of all flight attendant hairstyles is the French Twist, also sometimes called the French Roll.

It is so elegant, classy and is a timeless hairstyle! To be able to do a French Twist can require a little bit of practice though, and it certainly doesn’t come easy to many! Keep practicing though and it will become second nature. 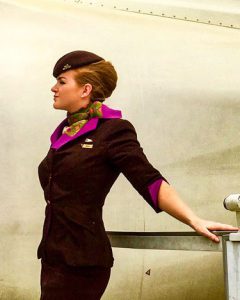 How to do a French Twist

There are a couple of ways you can do a French Twist – either starting from the bottom of the head or the top. It just depends what you prefer and what you find easier.

Personally I prefer starting a French Twist from below as this way you can keep your parting and side fringe. With a high French Twist you’ll usually bring all the hair back (see below right).

The main thing to do when doing a French Twist is to gather your hair together, as if you were to tie it in a pony tail. Don’t gather it too tight though.

Keep one hand holding the hair together, and with the other hand twist the hair between your fingers so it becomes a twisted ponytail. For this reason a French Twist will only work on medium to long hair.

If you have long hair you’ll still have some surplus hair and so you will need to fold the hair back on itself (going up or down the head again) so that it is adjacent to the first twist.

Use the other hand to keep the hair altogether. If you have extra long hair you’ll need to do one more fold.

You’ll then be holding the hair in this updo with one hand. You then need to slightly twist the hair to the side so that all the individual rolls of hair and the loose ends are hidden.

This is the reason you don’t want the initial ponytail too tight, otherwise it won’t be possible to twist the hair across, or it will pull on your hairs and hurt. 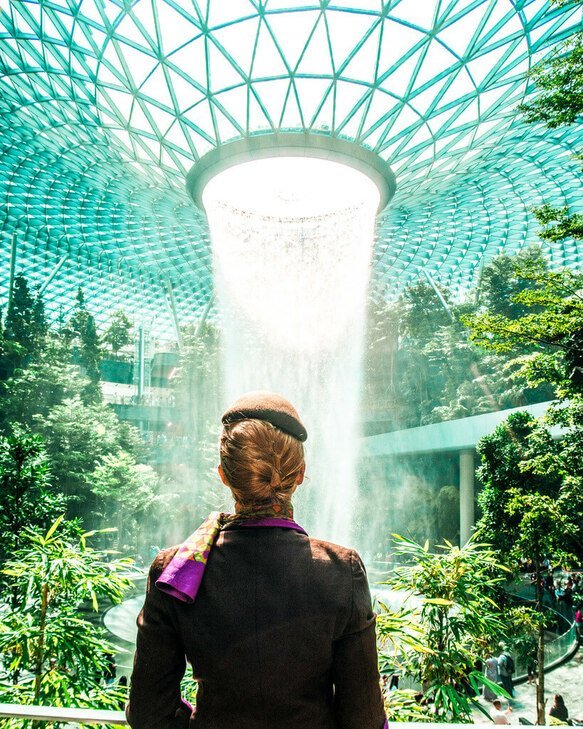 Hair Accessories for a French Twist

To fix the hair you will either want several U shaped hair pins (more sturdy than regular bobby pins) or a French Twist comb, available from most large pharmacies and shops like Daiso. Alternatively click here to order one online.

Simply use some U clips or a specific French Twist hair grip to secure the hair. When using U pins it is important to push the pin first in the opposite direction that you want it to go.

Otherwise the hair will drop quickly and the hairstyle won’t last. And a tiny, if your hair has been freshly washed it can sometimes be a lot smoother and so the hair grips don’t hold the hair as well. 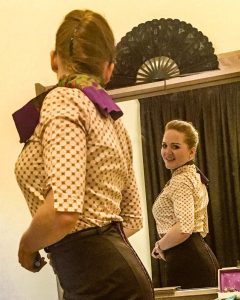 Once you get the hang of a French Twist you can do it in literally seconds, but yet it looks so glam!

Also take into account if your hat will still fit on once you have done the French Twist, so don’t do it too high!

If your hair is too short to tie up you will need to wear it down. Some airlines ask for your hair to not be touching your collar, others are a bit more lenient. Either way, make sure your hair is clean and neat. 🙂

Other Flight Attendant hairstyles that are accepted in some airlines include a fish tail braid, pony tails or plaits.