There are several nice walks you can do around Bobbin Head in Sydney’s Ku-ring Gai Chase National Park, with one of the most popular ones being the Sphinx Memorial to Bobbin Head loop track.

The 10km circuit takes you from the impressive Sphinx Memorial down to Bobbin Head via beautiful bushland and waterside views.

Stop off at the picturesque Bobbin Head and Empire Marina for some food, a chance to hop on a pedalo down the creek or to visit the mangroves, before heading back again. Read on for all you need to know! 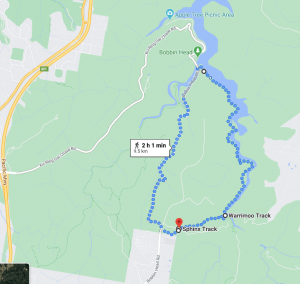 Should you start the walk at the Sphinx Memorial or at Empire Marina?

Going from the Sphinx Memorial to Bobbin Head means that you can stop off at Bobbin Head halfway through to refuel on food at the cafe here, but you start the walk by descending and leave the ascending part for the end!

If you are coming by car you may prefer to park at Bobbin Head and start the walk from here so you get the climb out of the way at the beginning.

Plus you’ll finish back at Bobbin Head where you’ll be able to get food at the cafe after the long walk!

Public Transport:
If you are coming by public transport take the T1 North Shore & Western Line train to Turramurra Station from Wynyard or Central. During peak times trains are every 10 minutes or so, sometimes even less.

During off-peak hours and weekends trains are roughly every 15 minutes. Trains will terminate at either Hornsby or Berowra. Click here to view the train timetable.

From Stand D at Turramurra Station you’ll then need to take the 577 bus to North Turramurra. Note buses run once an hour (more during peak hours) and on Sundays once every 2 hours!

If you are coming on a Sunday bear in mind that the last bus back to Turramurra is at 5pm so make sure you start the walk early enough so you finish in time!

There are only 5 buses on a Sunday so you definitely want to make sure you time it right! Click here to view the timetable.

The bus takes about 15 minutes and goes in a loop. It will head down Bobbin Head Rd for the majority of the journey, then it will head off to the left and onto Murrua Rd.

Don’t get off too early though, as the bus then gets back onto Bobbin Head Rd in a loop. Get off at the Kuring Gai Creative Arts High School.

When you are coming back, you’ll wait at the exact same bus stop to get the bus back to Turramurra Station once you’ve finished the walk.

Walk through the car park and you’ll see the Sphinx Memorial at the end on your left. Of course entry to Kuring Gai Chase National Park is free if you enter by foot.

Car:
You’ll find plenty parking spaces at either the Sphinx Memorial or at Bobbin Head. Note you will need to pay $12 for car parking in the National Park.

If the car park by the Sphinx Memorial is full then there are several free parking spaces just infront of the ticket booth that is outside the entrance to the National Park (it will take you just 5 minutes extra to walk from here to the car park).

You may also want to consider parking your car here if you think you will get back to your car later than sunset, as this is what time the gate at the Sphinx Memorial car park closes.

If the gate is closed and you need to get your car out it is a $50 opening fee.

At the start of the track you’ll see the Sphinx Memorial and Pyramids – a tribute to all the fallen soldiers of the AIF. They are the work of the late Pte. W. T. Shirley of the 13th Battalion who was severely gassed during the war.

This eventually led to his death. Completed in 1926, ex-Pte Shirley completed a replica of the original Sphinx in Giza, Cairo Egypt as during the war many Australian troops were camped in Egypt and visited the Sphinx.

His replica is built to a scale 8 times smaller than the original Sphinx however and took around 1.5 years for him to complete. 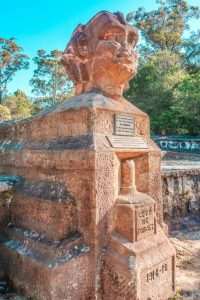 Just at the start of the track I was lucky enough to see an echidna in the bush! These beautiful creatures are native to Australia and look a little bit like a hedgehog.

They are sometimes known as spiny anteaters and are also similar to the platypus in the sense that they are the only two mammals that lay eggs. Of course with any wildlife don’t get too close as you don’t want to scare it. 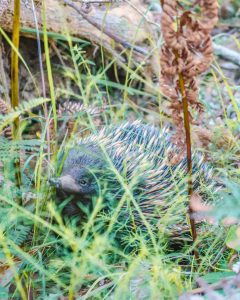 For the first couple of kilometres or so of the track, the path goes downhill through forest and is fairly easy although be careful if it has rained as parts can get muddy. The walk is not too difficult and consists mostly of rock and stairs.

The path then levels out and you’ll walk amongst beautiful ferns before coming to the calm waters of Cowan Creek. At the end of the track you’ll join onto another track that follows the path of the water. This track is known as Warrimoo Track.

Follow it to the left and you’ll eventually find yourself at Bobbin Head after a couple of kilometres. The track follow the creek all the way as it meanders towards Bobbin Head so you’ll get great views of the creek throughout the walk.

You’ll also walk through some mangroves and over a little water crossing at one point! I would definitely wear trainers and long trousers for this walk as I have heard of leeches being in the long grass here by the water crossing!

As you get closer to the marina, the views are really stunning.

Instead of taking the path on the left that will take you back up to the Sphinx Memorial, continue straight for 150 metres or so to Empire Marina at Bobbin Head. 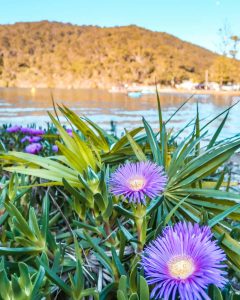 Head to Bobbin Inn cafe for some food and some nice cool drinks! There is also an Information Centre next door if you fancy popping in and learning more about the local area.

You’ll also find lots of picnic tables in the shade if you have brought your own snacks, or you can even sit along the water’s edge if you want to sit in the sun.

There are toilets and bbqs here and plenty rubbish and recycling bins so make sure you dispose of all your rubbish!

Hire one of the pedalos at the marina if you fancy, or simply admire the picturesque views of the boats and yachts here. Alternatively you could stroll down to the mangroves or round Apple Tree Bay Road. 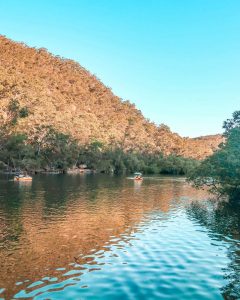 Make sure you’ve had enough food as the return part of the walk is mostly uphill so you’ll need some energy for these 5 kilometres!

Head back to the junction from earlier that leads to the Bobbin Head trail. From here you are going uphill, climbing mostly on stairs that have been cut out of rocks. You can get some really nice views back to the marina as you ascend quite quickly!

You’ll then ascend gently along the fire trail for the remainder of the trail. Most of the trail is exposed to the sun but in some parts you might see some Swamp Wallabies a little bit back from the track.

They are quite shy and of course you should never approach wild animals, but if you stay still you should be able to watch them for a little bit.

Luckily the last kilometre of the walk is downhill, and then you’ll come to the Sphinx Memorial again.

What to bring on the Sphinx Memorial to Bobbin Head Loop Track: 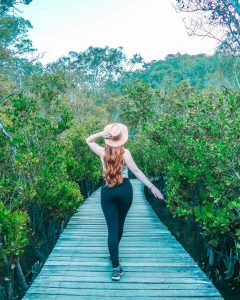 At times you’ll feel like you’re in the middle of the rainforest – you walk through mangroves and you can even swim in an incredible natural water hole with stunning blue water halfway through the walk! 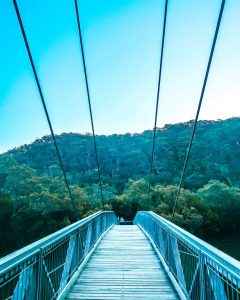 The walk is 6km one way and there is no public transport to Bobbin Head so you can either do this as a return hike (12km!) or as a continuation of the Sphinx Memorial to Bobbin Head walk (instead of doing the loop back on the rather uneventful fire trail at Bobbin Head, walk this way back instead).

You can then get the 576 bus from Grosvenor Street in North Wahroonga to take you to Wahroonga Station from which you can take the train back to Central or Wynyard (Wahroonga is on the same train line as Turramurra). 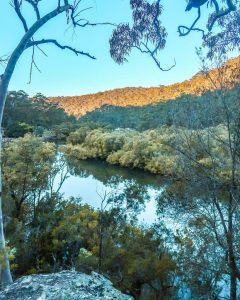 Remember if you come by car you will need to pay $12 for parking at Bobbin Head. Parking is free around Grosvenor Street in North Wahroonga if you decide to start from here. Either way – you’ll then need to get back to your car at the end!

There are lots of nice photo spots along the way, starting with the bridge across to the mangrove forest and the mangrove boardwalk, as well as the rainforest walk.

At times you’ll swear you are in Far North Queensland and definitely not within an hour of Sydney! 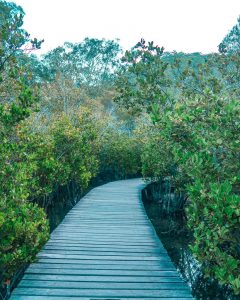 Take the Birrawana Loop Track from Bobbin Head to Apple Tree Bay. This walk goes uphill to get to Cockle Creek Lookout – a viewpoint I was really looking forward to visiting but the view was completely obstructed by trees!

I could see really tiny bits of the view between the trees but it would have been amazing had the trees not been in the way. Walk for a couple of kilometres to get to Apple Tree Bay – a popular place for boaties to visit on the weekends.

From Apple Tree Bay you can then do the picturesque walk all the way along Cowan Creek to Berowra.

You can also walk to Apple Tree Bay along Apple Tree Bay Road which follows the water’s edge if you would like a more picturesque walk with less climbing.

Walks in the National Park are split up mainly into three parts: West Head (the eastern part of Kuring Gai Chase where you will find Resolute Beach and The Basin), Bobbin Head and the area around Cowan Creek up to Brooklyn. 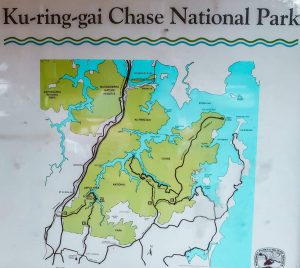 If you’re looking for some National Park walks in the nearby Central Coast area check out:

Alternatively if you’ll be heading down closer to Sydney and fancy checking out some of the coastal walks on Sydney’s Northern Beaches:

If you are after some coastal walks in Sydney’s Eastern Suburbs, check out:

Alternatively, for a wider selection of Sydney coastal walks check out: