Bondi Beach is the most famous beach in Australia and is a must-visit on any Sydney itinerary – here are some facts about the iconic Sydney beach! 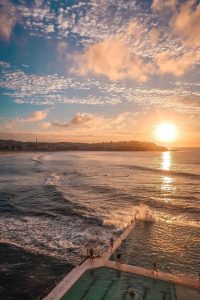 Bondi Beach is Australia’s busiest beach and as it is one of the most famous beaches in the world it attracts many people every single day. It is estimated around 2.7 million people visit Bondi Beach every year! The beach is 1km long and is Sydney’s widest beach but can get very crowded during the summer months! In fact on really busy hot summer days you can expect up to 40,000 people here on Bondi Beach!

As the white sandy beach is only 7km (4 miles) east of Sydney CBD it is really convenient to get to and is a popular place with both locals and tourists from all around the world.

Bondi Beach is known the world over for it’s great surf, and The Bondi Surf Bathers Life Saving Club is the oldest lifesaving club in the world. The BSBLSC has 1000 members, with the oldest one being 97 years old! 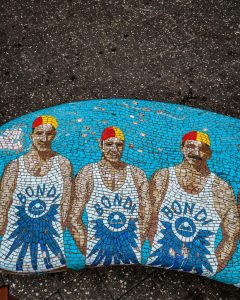 Bondi Beach even has it’s own television program that is really popular! Bondi Rescue captures everyday life and rescues for the lifeguards of Bondi Beach and has been on air since 2006. There have been several other TV programs, movies and music videos that have also used Bondi Beach as a filming location.

Sunday 6th February 1938 was a scorching hot day, so it meant Bondi Beach was absolutely packed. This day sadly came to be known as Black Sunday as hundreds of beachgoers were washed out to sea from the sand bar due to several freak waves at Bondi Beach. 5 people lost their lives and dozens more were injured and needing resuscitation as they were unconscious. This was the deadliest day on record at Bondi Beach and you will see the Black Sunday Monument near to the Bondi Icebergs swimming pool.

Bondi Beach is also known for it’s famous outdoor swimming pool: Bondi Icebergs. Bondi Icebergs is located on the southern end of Bondi Beach and it is an incredibly popular Instagrammable spot in Sydney. It costs $8 to swim in Bondi Icebergs, but if you don’t want to swim in the pool and you only want to get a picture, you can get the aerial picture below from street level when you are standing on Notts Avenue overlooking the pool.

The RSL and bar above provide great views of the stunning crescent shaped beach and beautiful scenery. 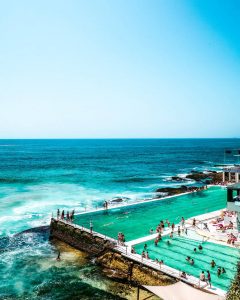 Bondi Beach is the start of Sydney’s most famous Coastal Walk: The Bondi to Coogee walk. This walk is 6km one way, so if you fancy just doing the first part of the walk, the Bondi to Bronte part of the walk is actually the best part and is only 2km long! Plus you end the walk at the fabulous Bronte Baths! Along the headland is a great place to go whale watching in the winter months, and you’ll also frequently spot dolphins year-round.

Bondi is also the start of the epic Bondi to Manly Walk – a colossal 80km walk that joins all the coastal walks in Sydney! Many people break up the walk and complete it over the course of several days. The walk passes some of the most Instagrammable places in Sydney such as Watson’s Bay, Parsley Bay, Milk Beach at Hermitage Foreshore, Rose Bay, The Harbour Bridge, Sydney Opera House, Cremorne Point as well as the famous Spit to Manly Walk.

The odd shark will come to Bondi Beach! There is a shark net here 150 metres from the shore and air surveillance teams monitor the beach for sharks, but still the odd shark will appear, and there have been a handful of shark attacks here over the years.

There are also some great weekend markets at Bondi Beach and there is a real international vibe in the area, with less than 50% of the residents being Australian! Despite Bondi being Australia’s busiest beach, and it being one of the most densely populated suburbs in Sydney, there are in fact many parts of the suburb that are quite quiet and sleepy, especially in North Bondi. 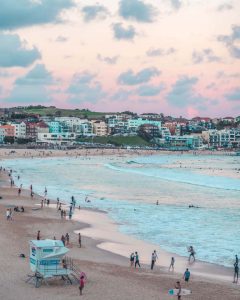 The name “Bondi” actually comes from an Aboriginal word that means “water breaking over rocks”.

Bondi Beach is also famous for it’s graffiti wall along the beach that showcases really impressive street art from artists all over the world.

The hottest day at Bondi Beach was in January 2018 when the mercury reached 47.3 degrees Celsius! Generally the summers in Sydney are pretty bearable, but there can be some really strong heat waves at times! 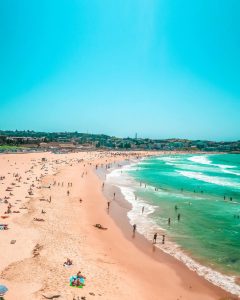 In 2007 over 1000 models in bikinis gathered on Bondi Beach to set a Guinness World Record for the largest swimsuit photoshoot!

Looking for Accommodation at Bondi Beach?

When you’re staying in Sydney, it is the dream to stay at Bondi Beach! Bondi Beach is host to a real variety of accommodation – from cheap and cheerful to extravagant penthouses facing the beach. You’ll find many luxurious apartments for a very reasonable price – click here to discover the best airbnbs at Bondi Beach!

How To Get To Bondi Beach:

Take the 333 bus from Circular Quay to Bondi Beach. Buses run approximately every 10 minutes and the journey lasts around 45 minutes. 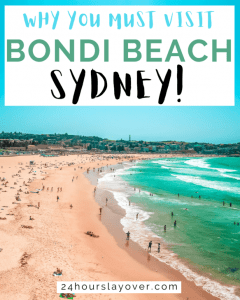