The iconic Bronte Baths is an oceanside swimming pool that can be found at Sydney’s Bronte Beach. On a warm day a visit to Bronte Baths make the perfect spot to cool down and go for a splash!

Bronte Baths are a popular Sydney location and are extremely Instagrammable. Here’s all your need to know! 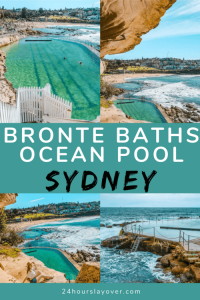 Where are the Bronte Baths?

Bronte Baths are located on the southern end of Bronte Beach – a beautiful yet crowded beach in the Eastern Suburbs of Sydney.

Bronte Beach is located along the iconic Bondi to Coogee coastal walk. In fact many people just choose to do the Bondi to Bronte section of the walk as this part has all the best views, plus you can then relax on Bronte Beach and then cool off in Bronte Baths afterwards!

Click here to find the location of Bronte Baths in Sydney on Google maps. 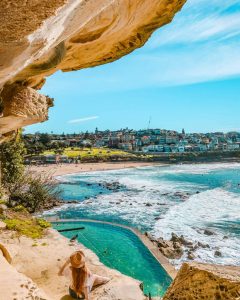 Bronte Baths is an ocean pool in Sydney that was built into the cliffside at Bronte Beach in the 1880s.

The pool is protected from the ocean, however the ocean waves often crash into the rocks on the edge and so the pool is filled with the salty ocean water. The water can be a little cold if you’re not here during the heat of the summer.

The pool is 30 metres in length, so whilst it is smaller than many ocean pools in Sydney there is still plenty space for swimmers to do lengths (lanes are marked out). There is also a shallower part of the pool separated by a wooden ledge that is perfect for families with children and groups of friends relaxing.

The ocean pool is perfect for those who are apprehensive to swim in the ocean or those who want to escape the sand. There are several spots here for you to lie your towel down and sunbathe too.

It also makes a great alternative to the nearby Bondi Icebergs pool, located at the start of the Bondi to Bronte walk (plus you have to pay to swim in Bondi Icebergs anyway!). 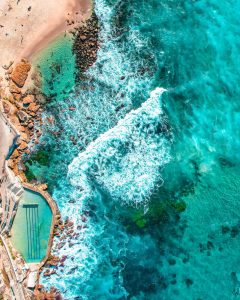 How to get to Bronte Beach

If you are using public transport the most convenient way to reach Bronte Beach is by bus.

Take the number 333 bus from Circular Quay (the bus stop is close to the ferry wharf number 2) in the direction of North Bondi. Alight at Bondi Junction. At Bondi Junction take the 379 bus to Bronte Beach from Stand E.

The bus will drop you right off at the southern end of the beach by the pool. The whole journey should cost less than $4 for adults when using an Opal card and the buses are every few minutes.

If you are heading to Bondi Junction you can also get the train from Central – the journey takes about 13 minutes. From there you can take the 379 bus to Bronte.

Uber is also a cheap and convenient way to get to Bronte Beach if you are short on time.

If you do plan to drive, be aware that parking can be difficult to find and can be expensive (around $5.80 for 1 hour). 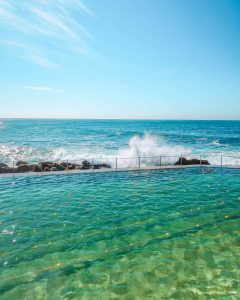 If you are travelling on public buses in Sydney you will need to have an Opal card to be able to ride. You can obtain (for free) and top up Opal cards at newsagents – there is one in Circular Quay.

You cannot get on a bus in Sydney and pay the driver in cash – you must have a valid Opal card so you can tap on and tap off.

Opal cards can also be used on ferries, metro, trains and light-rail in Sydney.

If you are taking public transport in NSW I recommend you to download the Opal Travel app. It can plan the best route for you – which number bus or transportation to take, as well as display when the next bus will arrive and how much the journey will cost. It certainly takes the stress out of planning your journey. 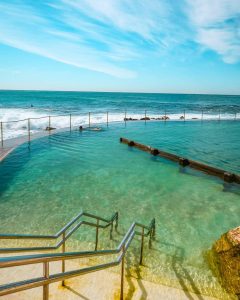 When to visit Bronte Baths

The warmer sunny months of October to March are perfect for enjoying a swim in Bronte Baths however it can also get quite busy at this time!.

Note the hot summer months in Australia are primarily December to February and the sun can be extremely powerful during the day. Therefore you may want to avoid the beach between the hours of 11am-3pm.

You also must wear sun protection in Australia in the summer (50+ is recommended) as Australia is exposed to a high amount of UV rays and the risk of skin cancers is increased.

Also note that the majority of December and January are when all the schools in Australia are on school holidays so Bronte Baths will be particularly busy at this time. 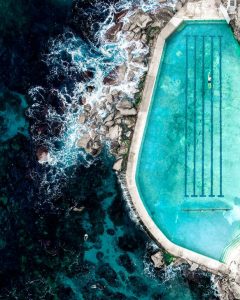 The baths are always open to the public, but if the sea becomes too rough or the pool is being cleaned they will temporarily close the metal gates in front of the baths, preventing access.

Note on Sundays 9-11am the Bronte Swimming Club does swimming galas here. It is a really nice atmosphere at this time!

You’ll also find toilets, changing rooms and shower facilities next to the baths. 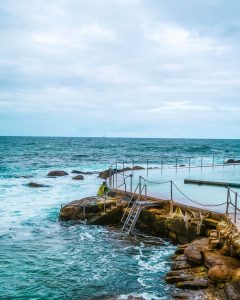 How to get the best photos at Bronte Baths

Especially on summer weekends, Bronte Baths are quite busy (although not as busy as nearby Bondi Icebergs!), so if you wish to get pictures without other people in I advise you come early morning mid-week during the winter.

The water will however be extremely cold at this time! But if you are just here to take pictures it is fine.

Another great time to visit if you wish to avoid the crowds is to come at sunrise. Bronte Baths are east facing so you’ll get to watch the sun come up over the ocean horizon from here – perfect!

There are three main Instagrammable spots at Bronte Baths – on the stairs with the white fence, by the rock wall and up on the rocks above the pool.

There are actually three sets of stairs going into Bronte Baths. The main stairs are not so Instagrammable so head around the side to the other stairs to get some pictures.

White Picket Fence
The stairs and white picket fence leading down to the deep end of Bronte Baths are a popular Instagrammable spot but you’ll need to get here early (or in the winter!) as the baths can get very busy!

People will constantly be coming up and down the stairs – especially if you visit during the weekends in the summer! 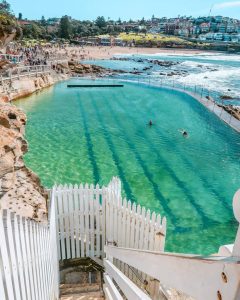 Rock Wall in Bronte Baths
Bronte Baths were built next to the rocky cliffside so you can get a really nice picture by the rock wall once you have gone down the stairs at the side of the pool with the metal hand rail.

Again you’ll need to be quick as people will regularly be going up and down these steps. 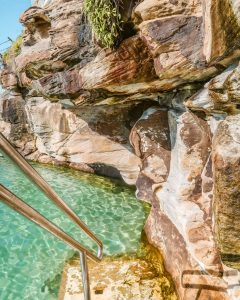 You can also sit on the edge of the pool facing the ocean and watch the waves crash against the rocks. Please be careful and only do this if the sea isn’t too rough!

Bronte Baths Viewpoint
There is a really nice Instagrammable viewpoint up on the rocks at Bronte Baths.

Walk to the far end of the pool and you will see some big rocks on your right that you can climb up and from here you will have a lovely view looking back onto Bronte Baths, with the beautiful Bronte Beach in the background. Be careful when climbing up as it can be a little difficult. 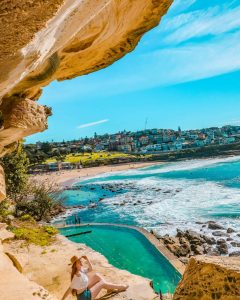 Where to stay near Bronte Beach

If you are backpacking and are on a budget head to Wake Up Hostel at Bondi Beach. This is a great place to stay as accommodation here is very reasonable, rooms are clean, people are sociable and friendly – and the hostel is located right in the heart of Bondi Beach!

You’ll need to book in advance as it often sells out. 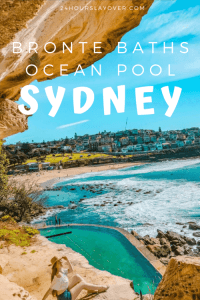