Looking to find out how to do the El Paso to Juarez border crossing walking? This post explains the border crossing walking between El Paso (USA) and Ciudad Juarez (Mexico) and safety in Juarez. It also explains the history of Ciudad Juarez, what there is to do in Juarez, and how you can visit on a tour. I was so pleasantly surprised by this Mexican border town and had very pleasant experiences during my time here. Why did I visit Ciudad Juarez?

First let’s talk about why on earth I decided to visit Ciudad Juarez. My friends have always said I’m crazy going to all these “dangerous” places on my own. Especially when I look like the biggest gringa on the planet (Celtic genes what can I say!). But I am really interested in these places and enjoy learning about their recent history and seeing it for myself. I went to Comuna 13 in Colombia alone (once deemed the murder capital of the world) and I moved on my own to Sicily – the land of the Mafia. Two supposedly dangerous places due to the grip drug gangs had over these places in recent times.

I of course visited these areas once the violence was over and it was safe for tourists to visit, and was overwhelmed by the strength the innocent local people had to carry on amidst all the violence and come out the other side stronger. They seemed more resilient, and determined to change the bad image of their land that the world now had. I wanted to see if the same was true for Ciudad Juarez.

My trip to Juarez was pretty spontaneous though. I was road tripping across the Deep South of Texas visiting beautiful places such as San Antonio and after a while found myself heading to El Paso. And I thought “you know what, I wana go across the border today”. And I ain’t talking crossing over the border to another state, I’m talking across the border to Ciudad Juarez, Mexico. The city that was dubbed the most dangerous city in the world only a few years ago.

Before we look at how to do the El Paso border crossing walking and what there is to do in Ciudad Juarez, it is important to understand about the Juarez Drug War.

Juárez and the Drug War

Being next to the USA border, Juárez is an important trading post between the USA and Mexico for business – legitimate and otherwise (ie: drugs). Ciudad Juárez became infamous as the world’s most dangerous city between the Drug War of 2008-2012. Street by street drug cartels battled to control the border city as it was a gateway to the lucrative drug market in the United States.

Violence engulfed Juárez. Roughly 10 innocent people a day were killed violently, dead bodies were publicly displayed, and the city was a ghost town after dark. In these four years, 10,000 people were murdered in Juárez as a result of the war between drug cartels trying to gain control of the city.

Is Ciudad Juarez safe to visit?

Fortunately now the homicide rate has dropped as violence between the warring cartels has declined. Law enforcement has improved, and the locals are beginning to lose their fear. The city still has scars though, with several buildings still abandoned as thousands of innocent people fled for their safety and never returned.

This doesn’t make Juarez unsafe though. Ciudad Juarez receives many tourists each year who come to learn about the history. I didn’t feel on edge when I was here, and I was happy to be helping the local businesses and economy. Just have your wits about you, like you would any city, and do not be on the streets after dark. Click here for more tips for travelling around Mexico. 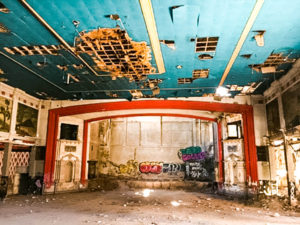 The cities of El Paso (Texas) and Ciudad Juarez (Mexico) are located on the USA/Mexico border. They lie together surrounded by desert and mountains, separated only by the almost dried up Rio Grande river. Crossing the border walking takes only a couple of minutes – you just walk over the bridge from one city to the other!

It is quite ironic that Juárez is one of the worlds’ most dangerous cities whereas El Paso is consistently voted one of the safest cities in the US, when they are within walking distance of each other.

Border crossing from US to Mexico: El Paso to Juarez walking

Crossing the border from El Paso to Ciudad Juarez walking is easy – you just pay a few pesos at the gate and then walk across the bridge. It is as simple as that. Nobody questions you and you don’t even need to show your passport. However of course you need your passport and papers if you want to get back into the United States so don’t forget to bring them! 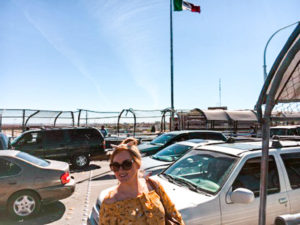 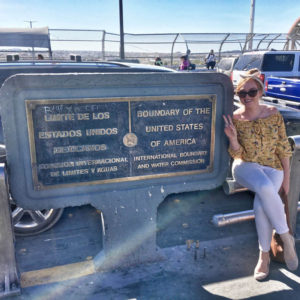 Border Crossing Walking From Mexico to US: Juarez to El Paso

When you are crossing the border walking from Ciudad Juarez to get back into the USA, prepare for the long queue to get back in. Even as pedestrians the queue is long. You’ll need to show your passport and papers (visa, ESTA etc) to be granted access to the United States. You’ll also go through security and x-ray machines. 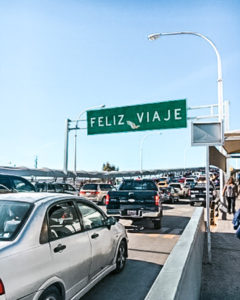 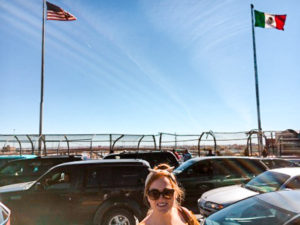 There are several lanes of traffic, and you’ll see the sign that shows the borders of the USA and Mexico. Crossing the El Paso Juarez border walking is much better than driving as you’ll be able to get photos with the signs!

Avenida Juarez back in the day

Coming off the Santa Fe bridge from the US, you walk straight onto Avenida Juárez. This was a street where many young Americans used to come and party all night long at nightclubs and casinos then head back to the US when the sun was up the following morning. It was like Las Vegas back in the day only way cheaper! This initially started in the 1920’s when the US implemented a prohibition on alcohol, so even people from as far as Chicago would come down to Juárez for a night on the town! However unfortunately it is not like this anymore as many places closed due to the Drug War.

Nowadays Avenida Juárez is full of money exchange places, dental clinics (Americans come here as it is much cheaper and very good quality) and a few remaining bars, including the iconic Kentucky Club (where the Margarita cocktail was invented). Marilyn Monroe, Al Capone, Ronald Reagan and Frank Sinatra have all sat at this bar having a drink, so definitely stop by for a cheeky margarita here!

The liquer Sotol, tequila’s little brother, is from Chihuahua, the state that Juárez belongs to, so do as the locals do and enjoy a nice lunchtime shot of Sotol when in Juarez! 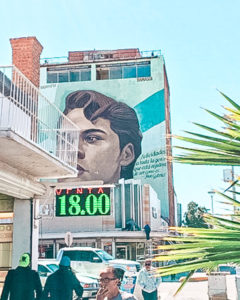 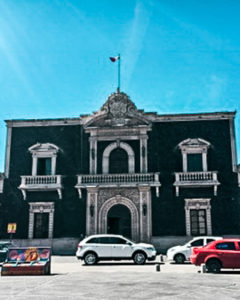 WHAT TO DO IN CIUDAD JUAREZ

I came to Juárez knowing it is hardly a top holiday destination full of tourist attractions, and it is unlike the Instagrammable parts of Mexico I had seen before whilst backpacking. But it was somewhere I wanted to experience myself, because I have an interest in cities that are trying to start afresh and move on from tragedy and their crime-ridden days.

That being said, there are some nice places round Ciudad Juarez to see. But stick to downtown Juarez as there aren’t really any attractions outside of downtown.

Juárez Cathedral (Our Lady of Guadeloupe Cathedral), in the interesting and lively Plaza de Armas (GREAT for people watching!), is a beautiful well preserved Catholic church well worth seeing.

In Plaza de Armas you will also see a golden statue of Tin Tan sitting next to a fountain. Tin Tan (Germán Valdés) began his acting, singing and comedian career in Ciudad Juarez, where he was raised. He featured in over 100 movies, and was the voice over in the Mexican Spanish dubbing for some Disney films, including Thomas O’Malley in The Aristocrats and Baloo the Bear in The Jungle Book.

Also by Plaza de Armas you’ll see the shoe shine boys. I just love seeing things like this – it really makes you feel like you’ve stepped back in time! 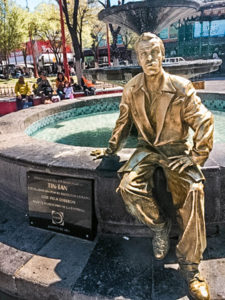 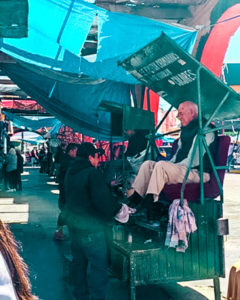 The Juarez monument located on pedestrianised Calle 16 de Septiembre is a nice modern monument where lots of locals like to sit and relax. From here you can see Juarez Cathedral and Plaza de Armas in the background. 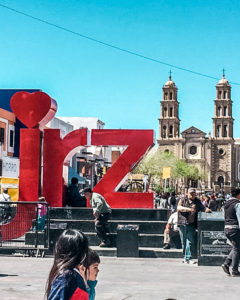 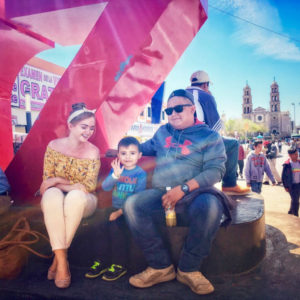 Museum of Revolution in the Borderland

Just opposite monumento JRZ is the Museum of the Revolution on the Border (museo de la revolucion en la frontera). This is a very educational museum explaining the history of Juarez and the Mexican Revolution.

Mercado Juárez is a bustling market, and a very interesting place about a 10 minute walk away. It is great for picking up local souvenirs and handicrafts, as well as a whole host of random Mexican things including sombreros, maracas, ponchos and wood carvings from Oaxaca. There are also lots of stalls selling religious statues, as well as statues of the Grim Reaper. If you wish to buy anything make sure to negotiate the price as they will set it high to start off with! Also bring cash as cards are seldom accepted here. Lots of performances and cultural events happen here so keep your eyes peeled!

There are lots of bars and restaurants outside the market for you to visit afterwards that sell a whole host of Mexican foods. Many have outdoor seating areas too. 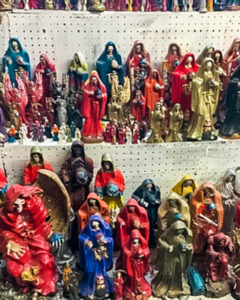 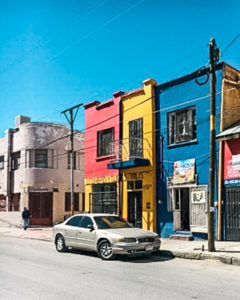 All the sights mentioned are within walking distance of each other.

The future of Ciudad Juarez

Walking through the streets it was crazy to think that less than a decade ago, Juárez was known as the ‘murder capital’ of the world. It is still one of the most dangerous cities in the world, and I still felt a sense of sadness amongst these streets; this city has been through terrible pain and suffered so much. But things are looking up for this city; violence is rapidly decreasing and the streets are busy as people are losing the fear they once had. If this is supposedly one of the world’s most dangerous cities, and people are still going out and living their life, well then the world can’t be so bad, right?

Make sure you leave Juarez and start walking back to the border crossing and El Paso before dark though. You definitely don’t want to be in Juárez after dark.

A beautiful place in El Paso to watch the sunset is at McKelligon Canyon or the Trans Mountains. Both are a short taxi ride from the centre of El Paso and El Paso International Airport.

If you would like to do a guided tour of Ciudad Juarez, click here to visit the Juarez Walking Tour company. It is run by Rich, an American guy who lives across the border in El Paso and does really great tours of Juarez for a reasonable price.

He takes you to all the tourist spots mentioned above, as well as into a few bars for some drinks and food! You get to meet locals and he provides you with lots of really great information about Juarez. I did this tour and had a really great time! What bridge did you use to cross into juarez from el paso?