Edinburgh, the capital of Scotland, is a charming historical city to visit with many Instagrammable places.

The city has such a lovely atmosphere and friendly locals and is perfect for a short city break with friends, family or a partner! 3 days in Edinburgh is a good amount of time to see the best that Edinburgh has to offer.

There are lots of well known Instagrammable spots, as well as many secret places to visit in Edinburgh! Read on to find all the best photo spots in Edinburgh! 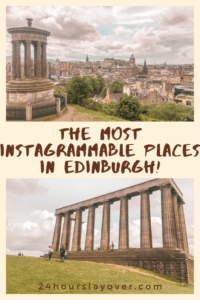 Located in the heart of Edinburgh’s Old Town is charming Victoria Street with it’s coloured facades.

It is said that Victoria Street is the main inspiration behind Diagon Alley in the Harry Potter stories created by J.K.Rowling, and a visit to this gorgeous quaint street is one of the best things to do that Edinburgh has to offer! 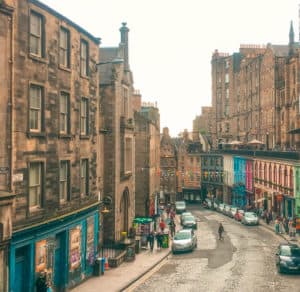 J.K.Rowling used to live here in Edinburgh and so she took inspiration for her stories from many parts of Edinburgh – more about this later!

In fact, if you have more time you can even do a Harry Potter Spotter Scotland Road Trip starting in Edinburgh!

The beautiful curved cobblestone street is one of Edinburgh’s most photographed locations due to all the colourful buildings, which are all independently owned shops and restaurants – a rarity to see these days.

One of my favourite boutique shops here is The Edinburgh Natural Skincare Company. They have hand-made natural skincare products presented in the most beautiful way that make great gifts.

The owner of The Edinburgh Natural Skincare Company, Tommy Crooks is a very pleasant and helpful gentleman.

Visit first thing in the morning to get photos without traffic or people in. 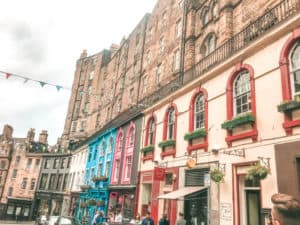 Calton Hill is easily accessible by foot from Edinburgh city centre. This is another one of the best Instagrammable places in Edinburgh, not only for tourists but for locals too. 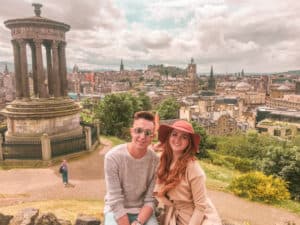 Calton Hill lies right above the heart of the city, and the panoramic views across Edinburgh from this UNESCO World Heritage Site are simply stunning.

The views at sunrise and sunset are incredible here, which of course means you won’t have the place to yourself! 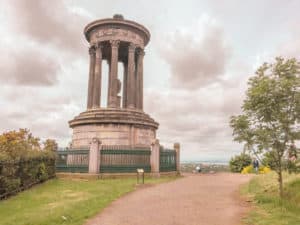 There are many historic monuments at Calton Hill and it really doesn’t take long to climb to the top. 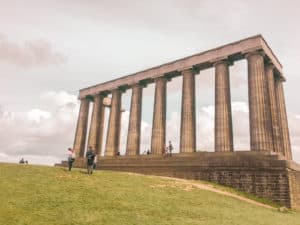 From Calton Hill you can see across to nearby Arthur’s Seat. 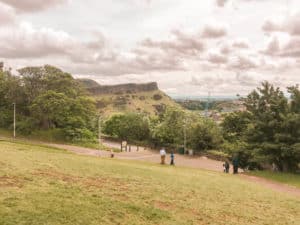 Arthur’s Seat is located in Holyrood Park and is the highest point in the park at over 250 metres above sea level. It offers magnificent sweeping views across the city and beyond. 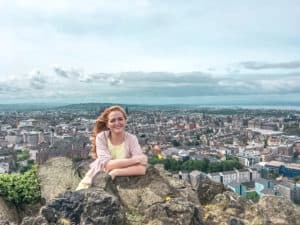 Climbing up to Arthur’s Seat is an easily accessible hike, and everyone visiting Edinburgh should definitely do it!

There are several different trails you can take to reach Arthur’s Seat, and although it is a popular place it is never crowded. You can get some really nice landscape photos here with the jagged cliffs and dramatic hills. 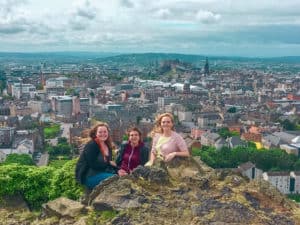 On the edge of Holyrood Park likes Holyrood Palace, once home to Mary Queen of Scots, and where Queen Elizabeth II resided when she used to come to Edinburgh. 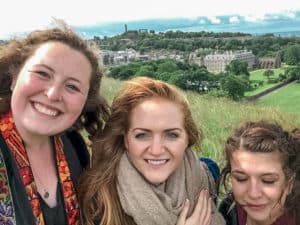 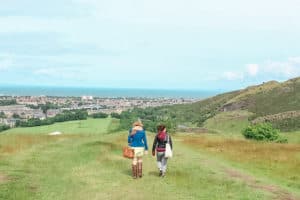 The most famous tourist location in Edinburgh – and one of the best places to visit in all of Scotland is Edinburgh Castle – home to Scotland’s Crown Jewels.

Edinburgh Castle sits on Castle Rock – an extinct volcano, and looms over the city.

The impressive and imposing castle, dating back from Medieval times, plays an important role in the history of Scotland and can be seen from all over the city as it dominates the skyline. 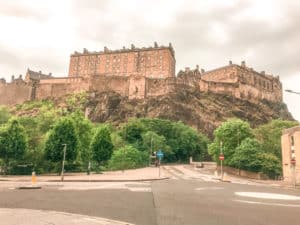 Make sure to visit inside the castle too. It opens at 09.30 every day, and is always busy. Infact, the morning is usually the busiest time here.

If you are at the castle at 1pm you’ll see the “One o’clock gun” fire from the castle – a tradition in Edinburgh that has been kept alive for over 150 years.

You can purchase tickets below – allow at least 2 hours for your visit. 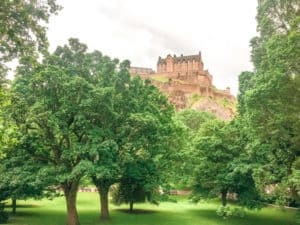 A popular place to get a really great view of Edinburgh Castle is from The Vennel Viewpoint. The Vennel is a small alleyway that leads onto Grassmarket.

The Vennel is a popular photography spot in Edinburgh so chances are you won’t have the place to yourself. Visit at sunrise or sunset for the best shots and best lighting.

Princes Street Gardens are just outside the castle. Stroll through and you’ll see several monuments, including the Gothic building monument dedicated to the Scottish Poet Sir Walter Scott. 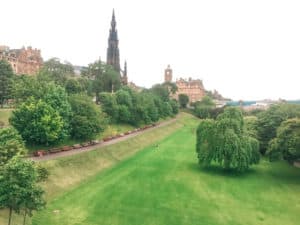 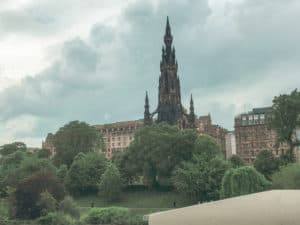 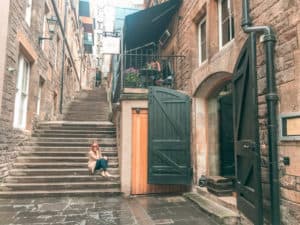 Off The Royal Mile (the main High Street in the Old Town) and Lawnmarket there are many cobbled alleyways, known as wynds, courts and closes that are really nice to wander down.

Make sure to stroll down them and get lost exploring! 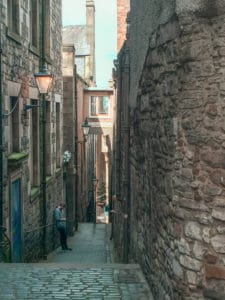 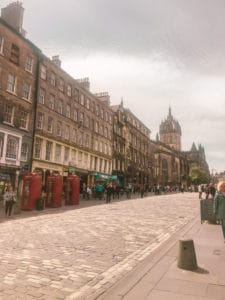 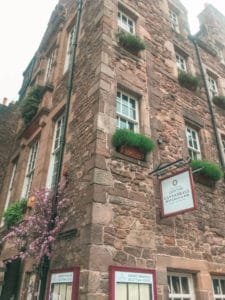 Circus Lane is a leafy residential street in Edinburgh and it is just as beautiful in real life as it is in the pictures. 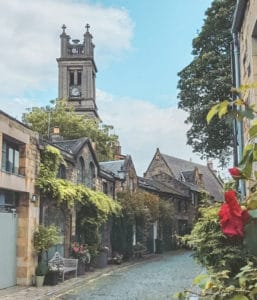 Circus Lane is just a short walk from the centre of Edinburgh. 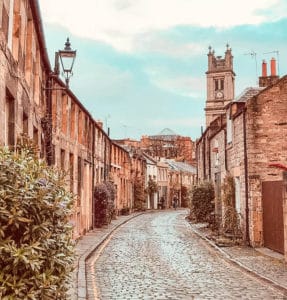 From Circle Lane stroll along the Water of Leith river until you get to picturesque Dean Village. This village was an old grain milling area back in the day and still retains it’s charm and 19th Century houses.

By the river are the best shots and it is not too busy here as it is relatively undiscovered to tourists. Here is Dean Village Google maps location. 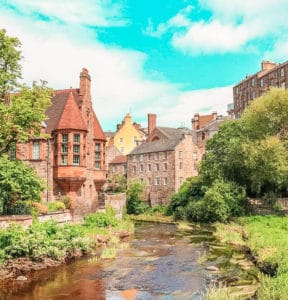 Another residential area of Edinburgh that is totally Instagrammable is Belford Mews.

Belford Mews is just a couple of minutes stroll away from Dean Village and what makes this place unique was that it actually used to be stables. 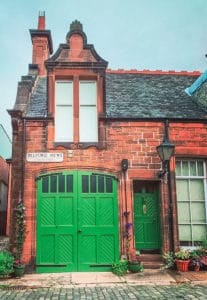 They have now been converted into houses and the cobblestone street and colourful doors and garages just ooze charm. 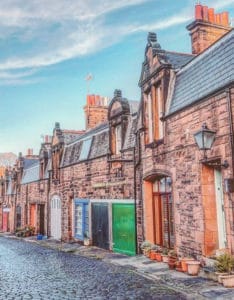 Those are my favourite Instagrammable places in Edinburgh, I hope you enjoyed them!

There are also lots of great places to go for food in Edinburgh. Read on for more information about visiting Edinburgh!

Visit The Elephant House cafe, where J.K.Rowling used to come in her early days to write her Harry Potter stories.

The bustling cafe is a really nice place to visit and if you sit in the back room you’ll have a lovely view of Edinburgh Castle.

The walls are adorned with articles about J.K.Rowling and Harry Potter. The food and drink selection here is great (it has been voted the best cafe in Edinburgh) and there are lots of cute souvenirs and products you can buy.

Edinburgh has some lovely traditional pubs. If you’re looking for an iconic one with stunning architecture, head to Tolbooth Tavern on Canongate.

All of the pubs have a really nice vibe, and if the sun is shining, make sure to sit in the beer garden! 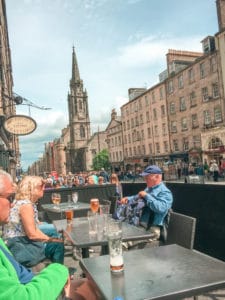 Haggis is the national dish of Scotland and you should try it when you are here! Traditionally it was a poor man’s meal in Scotland as it was inexpensive yet very nourishing.

Yet now you’ll find it everywhere – even in high end restaurants!

It is made of sheep’s heart, liver and lungs (all the parts of the sheep that would normally get thrown away) mixed with minced beef, oatmeal and onions in the casing of the sheep’s stomach.

It is then served with ‘neeps’ (turnips) and ‘tatties’ (potatoes). Typically haggis is eaten by the Scots on Burns Night (January 25th) and the Scots love eating it!

You might wonder why some men will appear to be wearing skirts in Scotland. These are not skirts, they are kilts! Kilts are knee length and pleated, made of heavy material and are tartan in design.

The patterns on the kilts vary as they all represent different clans. It is an honour for a man to wear a kilt as he is representing his clan when he wears it.

Kilts are especially popular at Scottish weddings and are worn by young and old.

You’ll also most likely come across someone playing the bagpipes when you are in Scotland. Bagpipes are a woodwind instrument and are the national instrument of Scotland.

The bagpipes were first used as an instrument of war and carry with them a strong sense of honour, pride and bravery for Scots. 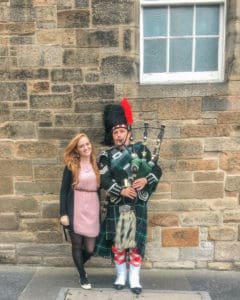 Edinburgh is supposedly the most haunted city in Europe, with it’s castle being one of the world’s most haunted castles. You can take many ghost tours in Edinburgh whilst you are here!

When is the best time to visit Edinburgh?

Whilst Edinburgh is a lively city that can be enjoyed at any time throughout the year, if you want to maximise daylight hours and increase your changes of good weather whilst you are there, my advice, as with all of the UK, is to visit in the summer.

This is when the nights are long with often less than 7 hours darkness each night, and the sun sets after 10pm. 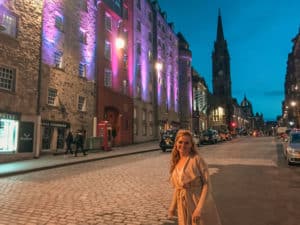 However, visiting Edinburgh in the Christmas period is a really nice time to visit too, with the Edinburgh Christmas Market and lights everywhere.

Another great time to visit Edinburgh is during the Edinburgh Fringe Festival. This is the world’s largest arts festival and takes place for 3 weeks in August (exact dates vary each year).

The festival features thousands of performances and shows across the city and is a really great event.

How to get around Edinburgh?

The centre of Edinburgh is fairly compact so it is quite easy to walk everywhere in the Old Town and the New Town.

Edinburgh is a fairly hilly city, being built on seven hills, so you’ll be climbing a lot without realising it.

If you’ll be travelling around Scotland and hiring a car have a read of this article about driving in Scotland for some useful advice. 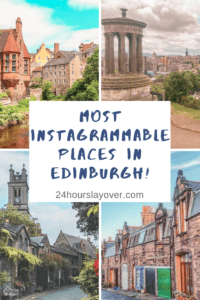