Are you looking for the magical Jacaranda Street in Sydney? Want to know where are the best places to see the jacaranda trees in Sydney? You’ll find all the information here! 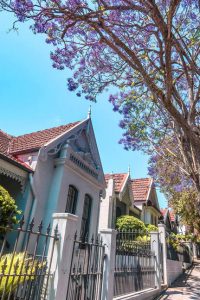 The famous purple jacaranda blossoms can only mean one thing in Sydney – spring is here! In a similar way to how the cherry blossom flowers are anticipated in Japan, residents of Sydney love the purple jacaranda flowers and associate the arrival of the jacaranda with the end of winter.

The jacaranda season with the purple flower rain is often hailed as the most beautiful blooming season in Sydney and in fact the whole of Australia. Jacaranda blossom season happens every year, however it only lasts for a few weeks: during the last couple of weeks of October to mid November when it peaks. During this time many streets become awash with purple flowers as they bloom, and you’ll find pockets of jacaranda spread out all over Sydney and it’s suburbs. 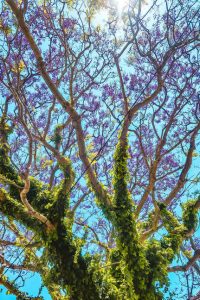 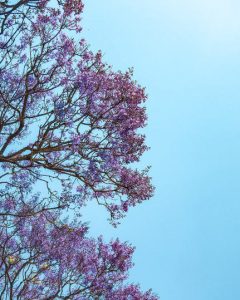 Late in the jacaranda season, the purple flowers start to fall off the trees, and it really is like purple rain! A carpet of purple petals covers the streets, whilst there are still lots of purple flowers in the trees. Then after the jacaranda season is over, a green foliage forms on the trees until the next season. Visit literally any suburb in Sydney and you’ll come across jacaranda trees, however some suburbs do have more jacaranda trees than others. Here in this guide you will find the best places to spot jacaranda in the street in Sydney!

Best Place to see Jacaranda Trees in Sydney in spring:

What makes the jacaranda at Mcdougall Street in Kirribilli so special and the best place to see jacaranda in Sydney, is that the whole street is lined in jacaranda trees in one giant canopy or tunnel of purple flowers, whereas in lots of other places in Sydney you’ll just find one or two trees – you won’t find so many jacaranda trees concentrated together in such a photogenic way. The jacaranda blooms are the heaviest here in McDougall Street, and when the petals fall to the ground the whole street is covered in purple, making it like a magical purple wonderland and definitely the best place in Sydney to photograph the jacaranda flowers!

To get to Kirribilli you can take the ferry to North Sydney wharf from Circular Quay, or take the train to Milson’s Point. Kirribilli is located just north of the Harbour Bridge and MacDougall Street is located next to Milson Park, where you can also get some nice photos of the jacaranda trees. Bear in mind McDougall Street is a residential street so please be respectful of the people living here.

Also very important: please watch out for the cars when you are here – they can come down the road quite fast so try not to stay in the middle of the street when you are taking photographs. Get out of the road when a car is approaching, never expect a driver to wait for you to finish taking your jacaranda photographs, this is incredibly disrespectful. The residents of the street have been very patient with the influx of visitors during the jacaranda season, but understandably tensions do seem to be running a little thin amongst some of them. From morning until night for a few weeks a year, hoards of people swarm onto their street, taking over the road trying to get the perfect Instagrammable photo, and making it hard for the locals to get anywhere.

Due to this behaviour, often locals will honk their horns when they are driving, and I think it is important to offer alternatives to the jacaranda flowers street in Kirribilli. Whilst McDougall Street in Kirribilli is the number one best place in Sydney to see the jacaranda flowers, there are plenty of other places to see jacaranda in Sydney. Some of them are not residential areas, and there are even some Jacaranda Festivals you can attend to really get in the spirit! 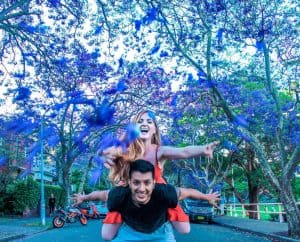 Lavender Bay is another popular place in the Sydney Lower North Shore area to see the jacaranda flowers. Head to the Heritage Listed Wendy Whiteley’s Secret Garden and you’ll find many people here trying to get the perfect jacaranda photo for their Instagram. From Wendy Whiteley’s Secret Garden you can get an incredible view of the Sydney Harbour Bridge and the Harbour Foreshore and all the jacaranda trees.

Other places in the Sydney North Shore that have some jacaranda flower trees but are a lot quieter are Wollstonecraft, Waverton, Greenwich, Woolwich and Hunters Hill.

Woolwich is also home to many jacaranda trees and one of the best places to see them in bloom. Start at The Old School House, wander down Woolwich Road, through Kellys Bush Park and to the Old Woolwich Dock to see the best of Woolwich’s jacaranda display and enjoy the Harbour views along the Parramatta River.

Other Places In Sydney To Enjoy The Purple Jacaranda Flowers

The Eastern Suburbs of Sydney is another great place to go jacaranda spotting. You’ll find jacaranda trees in places including Paddington, Double Bay, Woolahra and Vaucluse (courtyard of Vaucluse House). You can easily stroll between these suburbs and visit them all in one afternoon.

The best places in Woolahra – just a short walk from Bondi Junction, to find jacaranda include: 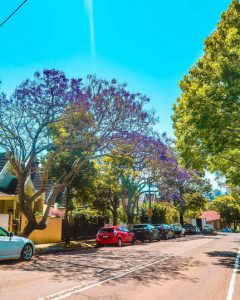 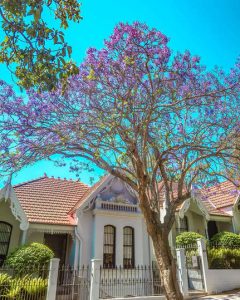 The best places in Double Bay to find jacaranda include:

Not only will you find jacaranda trees in the suburbs of Sydney, you’ll also find them in the City Centre!

There is also a sprinkle of jacaranda trees outside Sydney’s Town Hall and down Macquarie Street.

At Cathedral Street in Wooloomooloo just east of Hyde Park in Sydney CBD, you’ll find a row of jacaranda trees lining the street. Through a gap in the trees you can see the iconic Sydney Centrepoint Tower poking through, which makes for a great photograph.

Camden is a lovely suburb about an hour’s drive from Sydney CBD. During the 1920’s, 39 jacaranda trees were planted here and now every November, Camden hosts the annual Camden Jacaranda Festival to celebrate these beautiful flowers. Camden is the best place in South West Sydney to see the purple jacaranda flowers! You’ll find the stunning jacaranda trees along Argyle Street in the centre of town. Second only to McDougall Street in Kirribilli in terms of the best place in Sydney to see the jacaranda, the jacaranda tree canopy in Argyle Street in Camden is truly stunning and definitely worth a trip.

At the Jacaranda Festival there are food stalls, markets, live music, fireworks, and Christmas Tree lighting lining the street, so it’s a really nice place to spend a couple of hours. The Camden Jacaranda Festival is held from 20-22nd November 2021.

Head to Tote Park Playground in Zetland to see a gorgeous row of jacaranda trees.

Also make sure to head to nearby Elizabeth Farm in Rosehill – the jacaranda here are stunning!

Other Places in NSW to Find Jacaranda

Grafton, which is located about 7 hours north of Sydney on the north coast of NSW is the jacaranda capital of Australia and hosts the iconic Jacaranda Festival every year, which is Australia’s longest running flower festival. More than 2,000 Jacaranda trees burst with colourful purple flowers and many people come to Grafton just to see these beautiful flowers. This is honestly the best place in the whole of New South Wales to see the jacaranda trees in full bloom and it makes for some incredible photographs!

This year, the Jacaranda Festival will run from October 26th to November 7th 2021 in Grafton.

Things to bear in mind when visiting a Jacaranda Street in Sydney: 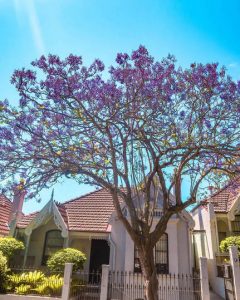 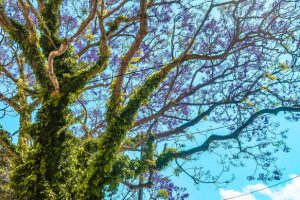 Why Is There So Much Jacaranda In Sydney?

The prevalence of so many beautiful jacaranda trees in Sydney, and the firm hold the jacaranda has over Sydney during November each year would have you believe it is a native plant of Australia, but it actually originates from Brazil! There are a few stories as to why there are so many jacaranda trees in Sydney – one being that a Hospital Matron gave jacaranda seedlings to newborn mothers to plant once they left the hospital. Another story goes that returning war soldiers were given jacaranda seeds to plant once they returned home.

The more plausible reason however seems to be that the jacaranda trees were introduced during the beautification process of the early 20th Century and around the war years, with some being introduced as late as the 1960’s. During the jacaranda’s early days in Sydney, it was considered one of the rarest yet most beautiful trees as it seemed notoriously difficult to grow from cuttings. Later it was discovered though, that jacaranda grows readily from freshly fallen seeds. 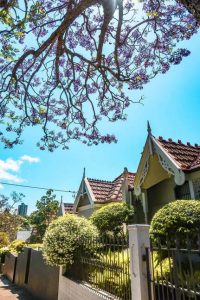 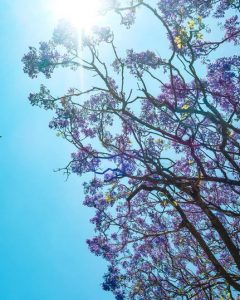 Other Places in Australia To See The Jacaranda Trees

Sydney isn’t the only city in Australia to host the jacaranda trees. You’ll find them everywhere, including the main cities of Brisbane, Perth, Melbourne and Adelaide. Due to the temperature differences, jacaranda season starts earlier in Brisbane – in October, and in December in Melbourne.

The jacaranda trees bloom a few weeks earlier in October in Brisbane compared to Sydney. The city is covered in purple, in particular the South Bank is a lovely place to see the jacaranda and the pink bougainvillea flower together as well as the University of Queensland campus hosting several stunning jacaranda trees. You’ll also find jacaranda trees at Woolloongabba, the Botanic Gardens and in New Farm Park there is a fabulous jacaranda tunnel which you must visit!

The jacaranda season in Perth is similar to that in Adelaide – it starts roughly a month later than the jacaranda season in Sydney, blooming in November and then reaching it’s peak season in December. Head to the suburb of Applecross, south of the river, to see incredible jacaranda lined streets. If you have a drone you can get a great shot with the stunning jacaranda lined street in the foreground and the CBD in the background. Alternatively, head to the suburbs of Subiaco and Inglewood, located north of the river where you’ll also find beautiful jacaranda trees.

Jacarandas bloom in December in Melbourne. Head over to the University of Melbourne and The Botanic Gardens to see the jacaranda trees in full bloom.

So there we go, the best places to see jacaranda trees in Sydney, as well as the whole of Australia! Have you been jacaranda hunting yet, and have you found any other jacaranda streets across Sydney? Let me know in the comments below!