Heading to a Mardi Gras celebration and looking for some great captions, quotes or puns to share with your Instagram photos?

Whether you’re headed to celebrate Mardi Gras in the city most famous for it: New Orleans, or at another Mardi Gras celebration such as the well-known ones in Rio de Janeiro, Venice – Italy or even in Sydney – Australia, you’re bound to have an unforgettable time!

Mardi Gras translates literally to mean “Fat Tuesday” but is more commonly known as “Shrove Tuesday”. It marks the last day before Lent, when many Christians traditionally give up one of their luxuries – or ‘fast’ in the 40 day lead-up to Easter.

The name Mardi Gras comes from the feasting that happens on this last day of indulgence. Nowadays however, in many places the celebrations actually last for days and sometimes even weeks.

They include lots of music, dancing food and parades. Attending a Mardi Gras parade is really fun and you should attend at least one in your life!

You’re sure to take lots of photographs at your Mardi Gras celebrations and want to share to your Instagram with the perfect caption!

Here are all my favourite Mardi Gras captions, puns and quotes – just pick the one that will go perfectly with your pictures! 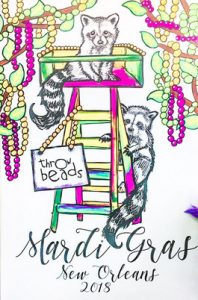 3. “It’s a great party, and anyone who doesn’t enjoy Mardi Gras is not of this world.” – Franklin Alvarado

5. “Some girls are just born with glitter in their veins.” — Paris Hilton

16. On Tuesdays, we wear beads

17. Fat Tuesday: I’ve been training for this.

19. My favorite Tuesday of the year.

20. Fat Tuesday is the best Tuesday.

23. The only good Tuesday is Fat Tuesday

25. Ready for parades and party vibes

26. We don’t hide crazy, we parade it down the street

29. Mardi Gras is the only day of the year where my behavior is not frowned upon

30. Who says you need to be at Mardi Gras to drink all day?

33. Remind me to delete these posts when I have kids.

34. I don’t need an excuse to drink on a Tuesday

36. You gotta fight for your right to Mardi

45. All things are possible with beads and bling.

46. It’s the beads and bling that matter most

47. All you need is love and some really nice beads.

48. It all starts with one little bead.

49. Hit me with your best beads

51. Beads are a girl’s best friend

54. Will do bad deeds for plastic beads.

58. Every day is Mardi Gras in New Orleans.

59. You have to experience Mardi Gras in New Orleans at least once.

61. Life is short, go to New Orleans on Mardi Gras!

68. There is nothing King Cake can’t fix

70. The best things in life are meant to be shared. Especially king cake

71. Some dream of king cake, others bake it happen.

73. From now on sweet dreams are made of king cake & dancing at Mardi Gras

74. Nobody puts baby in the king cake.

77. You can’t buy happiness but you can buy beads and king cake and that’s pretty much the same thing.

78. Leave a little sparkle wherever you go

79. My favorite color is glitter

81. Everyone deserves to shine, smile, and sparkle

83. Hey mister, throw me one of those

85. You’re not fully dressed until you sparkle

91. Confetti in my hair, cocktail in my hand.

96. Shrimp and rice and everything nice.

102. Bringing Beale Street to my street.

105. Meet you on Frenchmen Street!

106. Bringing the Big Easy to my living room.

108. “There was a change in the air. It was Mardi Gras in New Orleans, after all.” — Penelope Douglas

109. “An American has not seen the United States until he has seen Mardi Gras in New Orleans.” – Mark Twain

110. “Mardi Gras is the love of life. It is the harmonic convergence of our food, our music, our creativity, our eccentricity, our neighborhoods, and our joy of living. All at once.” – Chris Rose

112. “There is no other place on Earth even remotely like New Orleans. Don’t even try to compare it to anywhere else.” — Anthony Bourdain

114. “Fighting a Mardi-Gras-In-New-Orleans crowd for eight blocks from Trahan’s Tavern on St. Peter to Bourbon O on Bourbon was like a man being willing to swim the Nile, climb Mount Everest, and cross the Sahara for true love.” – Erin Nicholas

115. “A great, wild, adult thing to see is the costume competition in front of the bar Oz on Bourbon early morning on Fat Tuesday.” – Bryan Batt

116. “New Orleans is like the bad-kid island in Pinocchio.” — Jonah Hill

117. “It’s always on everyone’s list, like, ‘What’s New Orleans like?’ I think people have a preconceived idea, like it’s just Mardi Gras and Bourbon Street. But really, there’s so much culture, the music’s great, the food’s great. It’s not good for the waistline! But I’m actually from the South, I’m from Georgia, so the weather doesn’t bother me.”- Sung Kang 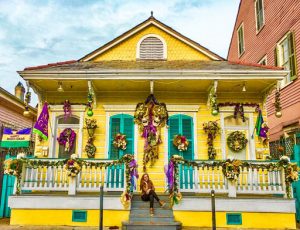 Hopefully you got lots of inspiration and ideas from these Mardi Gras Instagram captions, quotes and puns and were able to find the ideal one to go with your photos!

Whether it’s a famous quote, a funny pun or short caption, you should be able to find one perfect for your Mardi Gras photo!

Do you know any other famous quotes or captions about Mardi Gras? Feel free to leave them in the comments below if so!