If you’re looking for a convenient island getaway day trip from Hervey Bay it’s definitely worth checking out Round Island!

Most people only know Hervey Bay as the humpback whale watching capital of the world, or the gateway to the famous Fraser Island (K’Gari) – the world’s largest sand island. Hervey Bay however also has a few small beautiful and uninhabited islands a few kilometres offshore that are really worth exploring on a day trip if you are in the area!

Apart from Fraser Island (K’Gari), many people are unaware of the secluded islands that lie in the waters that surround Hervey Bay. Big Woody Island, Pelican Banks and Round Island make up some of these islands. 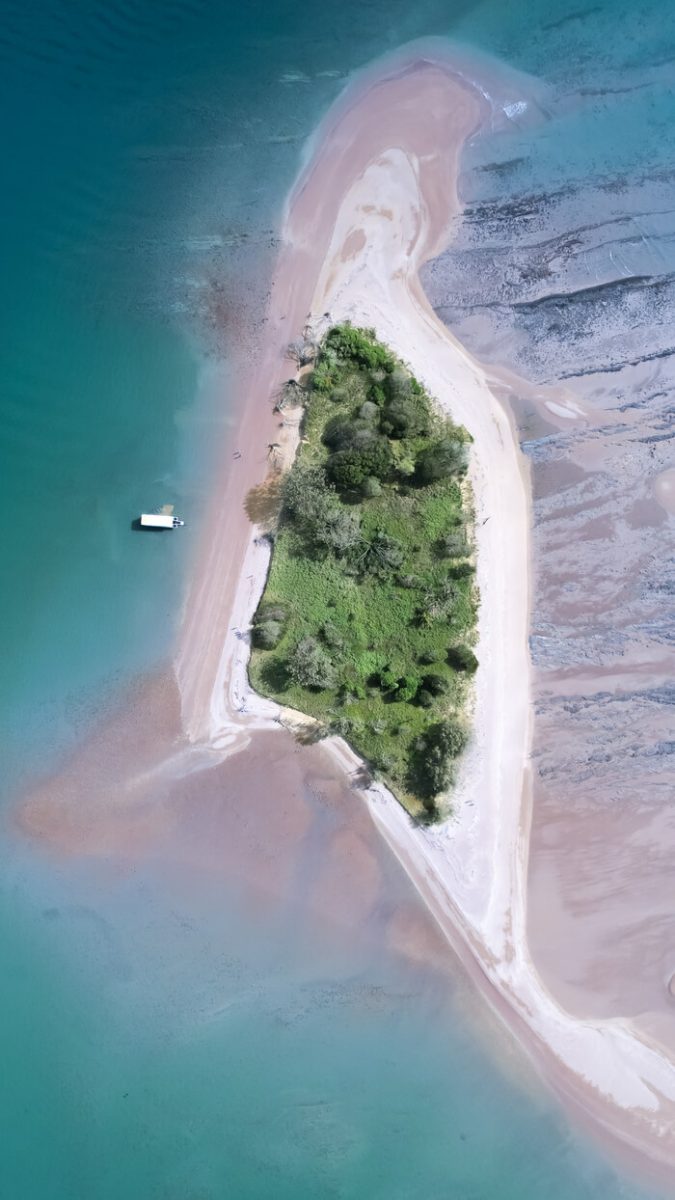 Where Is Round Island?

Round Island lies between the mainland and Fraser Island. Out of all the islands in the bay it is the closest island to the Hervey Bay coastline. It located just over 1km from the Great Sandy Straits Marina in Urangan – one of the towns that makes up Hervey Bay. Therefore it makes for a really easy and accessible day trip from Hervey Bay.

Round Island is west of Big Woody Island and also just a few kilometres south-west of the breathtaking sand cay Pelican Banks . Despite being so close in location however, they are rather different in appearance. Round Island is a terracotta coloured coral sand beach, as opposed to the pristine white silica sands of Pelican Banks.

Round Island is known as Weenandin in the Aboriginal Butchulla language (the Butchulla people are the Traditional Owners of K’gari and First Nationals People). Despite being called Round Island however, the island is no longer round and is more of a diamond shape! Of course the tides affect the shape of the island and the movement of the sands over time.

What Can You Do At Round Island?

Round Island is a tiny island with no amenities – but you could still keep yourself entertained here for a couple of hours.

Many people come to Round Island to go for a swim in the water, bring some lunch and relax on the beach. It’s also a good place for snorkelling so if you’ve got your snorkelling gear then definitely go snorkelling towards the reef. Most of the island – except the south east part, is surrounded by reef so you don’t have to venture far. There’s lots of wildlife in the water here so hopefully you will be able to spot turtles, dolphins or even the elusive dugong!

Round Island is also popular for fishing so you may wish to go fishing on the north-east part of the island by the rocky reef.

The water surrounding Round Island is fairly calm, so the south east part where it is sandy makes a great place for children to paddle and makes a great family day out. Just be mindful of any boats landing, as well as the tidal floor.

Additionally, a stroll around the island is sure to keep the little ones entertained. Round Island is only about 100metres wide but there are plenty of interesting shells and rock ledges to look at, as well as shallow rock pools to play in.

Is Round Island Busy?

Round Island makes a great place to spend a couple of hours and it’s never busy. You’ll most likely only find a couple of people here relaxing on the beach. You may see several people coming and going throughout the day but chances are they won’t hang around on the island for that long! Local boaties will often just do a quick stop at the island for some lunch or a swim before carrying on elsewhere.

To be honest I’m really surprised that many Australians haven’t even heard of Round Island! It took until my third time in Hervey Bay to even hear about this island – and it took a lot of Google searching to find it!

Round Island is perfect for couples for a romantic getaway, families and groups of friends that just want to sit and relax.

If you stay here until late afternoon, you’ll probably notice lots of seabirds coming back to the island as this is where they roost for the night.

How To Get To Round Island – Hervey Bay

Despite being a secluded island, Round Island is easily accessible by boat from Hervey Bay, which is located 3.5 hours drive north of Brisbane.

Of course you can get to Round Island with your own boat, but the great thing is that one of the local tour companies in Hervey Bay offers visits to Round Island so it is very easily accessible as a day trip!

Hervey Bay Eco Marine Tours organise return transfers to Round Island, or you can even visit it as part of their Turtle Discover Tour.

The tours are popular as they visit other islands too, but for those who have already explored the other islands in the area, the Round Island transfers are the most popular and efficient way to get to Round Island. Transfers from Urangan Marina take 15 minutes and cost $55 for adults and $45 for children. You get dropped off and can enjoy the day on the island on your own as you wish. Not bad for your own isolated island for the day right?

Prepare if you visit with your own boat – it isn’t called the Great Sandy Straits for nothing! The marine park is full of shallow sand banks and you may have to navigate in narrow and shallow passages at low tide.

Alternatively, some people do kayak out from the mainland seeing as Round Island is so close. However, you need to be careful as it is a busy marina. Always be on the lookout for boats and jet skis. Additionally, it is strongly advised to check the tide and wind forecast before you head out.

As you are crossing a deepwater channel, it isn’t advised to kayak out if there are strong winds going against the tide. If you are ever in doubt, speak to one of the local skippers at the marina and ask for their advice.

Find the Google maps location of Round Island here.

Anchoring At Round Island

If you’ll be coming over to Round Island on your own boat you need to know where to anchor the boat.

The northern and western part of Round Island is surrounded by a rocky reef that is very shallow, so you’ll want to do a beach landing on the south-east part of the island.

The tide moves in and out from Round Island quite quickly so it’s essential to always check the tide charts and times.

What To Bring To Round Island – Hervey Bay

Bring the usual culprits such as: swimming costume, reef-friendly suncream, hat, sunglasses, water bottle, food, camera, towel, jacket and comfortable shoes (reef shoes ideally, or sandals/shoes you don’t mind getting wet). Bring snorkelling or fishing gear too if you plan to do either of those activities.

As Round Island is close to the mainland, you will get data coverage on Australian phone providers.

History Of Round Island – Hervey Bay

Round Island is a significant place in the history of the Fraser Coast as it was the first site of contact between the native Butchulla People and the Europeans.

Round Island is a little hidden gem and is certainly a great day trip idea for those who want to do a quick relaxing trip from Hervey Bay.