Sheikh Zayed Mosque, also known as The Grand Mosque or Masjid Sheikh Zayed, is perfect is photography and is a must do when in Abu Dhabi! Not only is it one of the most Instagrammable places in Abu Dhabi, but also in the United Arab Emirates (UAE) and the whole of The Middle East! Infact Sheikh Zayed Mosque is the most famous attraction in Abu Dhabi and nobody can deny that this mosque is absolutely stunning and architecturally very impressive.

In this post I will tell you where all the best photography spots are, as well as all you need to know about visiting Sheikh Zayed Grand Mosque! I lived a 10 minute drive away from Sheikh Zayed Mosque for almost 4 years so this blog post will be the only one you’ll ever need and covers a lot of things that many tourists and visiting bloggers won’t be aware of! 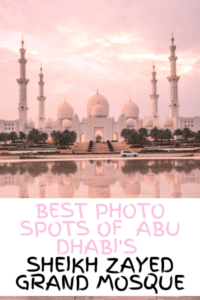 Covered in white marble walls, surrounded by reflective pools in the courtyard and with 82 intricately detailed domes, many people believe Sheikh Zayed Mosque is the most beautiful mosque in the world.

Here are some impressive facts about the Sheikh Zayed Grand Mosque: 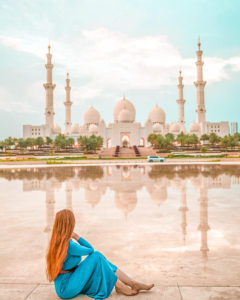 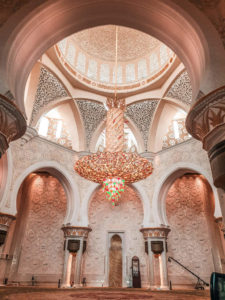 How to Get to Sheikh Zayed Grand Mosque

If you are in Abu Dhabi the easiest way to get to The Grand Mosque is to take a taxi to the Sheikh Zayed Mosque Visitor Centre. Taxis are relatively cheap and readily available in Abu Dhabi. Despite Arabic being the official language of the UAE, English is spoken by all taxi drivers here. All taxis in UAE use a taximeter and are equipped with CCTV so you never need to worry about a taxi driver trying to rip you off. When you want to leave the mosque, you’ll find lots of taxis waiting outside. If for any reason there aren’t any you can download the Abu Dhabi Taxi app and order a taxi.

If you are driving to Sheikh Zayed Mosque there is plenty parking here.

How To Get To Abu Dhabi From Dubai

Many people visit Abu Dhabi on a day trip from Dubai. Abu Dhabi is roughly a 90 minute drive from downtown Dubai and you can take a taxi from one city to the other for around 250 dirhams (£50). Alternatively you can take the bus for a fraction of the price (25 dirhams = £5!)! To learn exactly how and where to get the bus from in both Dubai and Abu Dhabi, as well as all you need to know about taking taxis in UAE, click here.

You can also visit Abu Dhabi from Dubai on a guided tour.

A few years ago you used to be able to walk straight up to the mosque through a tiny visitor centre tent but due to the vastly growing number of visitors a New Visitor Centre was built to accommodate the growing numbers. Nowadays to reach the mosque you’ll need to go through the New Visitor Centre – you’ll find the entrance in the car park. An escalator will take you underground through a mall before you arrive to The Visitor Centre and the entrance of The Grand Mosque. In the mall there are toilets as well as lots of souvenir shops, cafes and clothes shops that you can have a look in if you wish.

Whilst it is free for tourists to visit Sheikh Zayed Grand Mosque, you need to book an access pass online before you enter. You can book the pass online – click here to book, or you can just request an instant access pass at one of the ticket machines at the entrance.

As you pass security at the Visitor Centre your bags will be screened. You aren’t allowed to bring in any food or drinks (including water), and often cigarettes and lighters are confiscated (of course you can get them back again as you leave). There are water fountains on the grounds to keep you hydrated.

You don’t need to visit Sheikh Zayed Mosque as part of a guided tour. It is easy enough to explore alone and you are very welcome to walk around by yourself.

Being a Holy place of worship you need to dress appropriately when at The Grand Mosque. Men need to wear trousers and ladies will not be allowed into the Mosque unless they have their hair covered and their skin covered up to their wrists and ankles. Don’t worry if you don’t have suitable clothes or a headscarf as women will be loaned an abaya (a traditional Islamic dress which is a simple loose over garment with a hood attached) free of charge to cover themselves up if necessary.

There are several different colour abayas to choose from – mahogany, black, dusky pink or blue, it’s up to you which colour you prefer! You’ll be guided to the dressing room when you’re in the underground mall before you get to the entrance barrier to the mosque.

Ladies make sure you keep your hair covered at all times. If you take the hood down or it falls down without you realising one of the Security Guards will ask you to put it back on. There are lots of Security Guards everywhere here to check everyone is being respectful so don’t try to take photos with the hood down as you will get caught. I find if you’ve just washed your hair, your hair will be extra smooth and so the hood is prone to falling down. Having a head band on or something could prevent it from falling down.

Bring shoes that are easy to remove as you’ll need to take them off to go into The Prayer Room. Also make sure to bring sunglasses with you. The bright white walls and floor of the mosque against the sunlight can be almost blinding for your eyes on a really sunny day.

When is the best time to visit Sheikh Zayed Mosque? 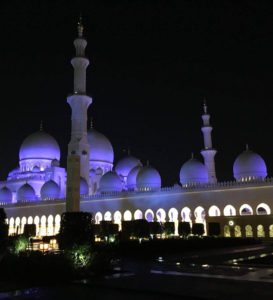 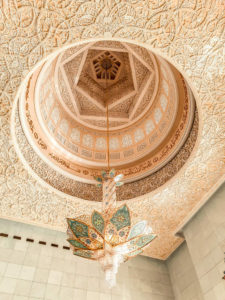 Where to get the best photos of Sheikh Zayed Mosque

Sheikh Zayed Mosque is perfect for photography and you can take stunning pictures from almost any angle. Despite the mosque being so crowded it is actually very easy to get photos with nobody else in too! I will recommend some of the best photography spots to get incredible photos of Sheikh Zayed Mosque below. Note that tripods are not allowed here.

Inside the Central Courtyard

Ever wondered why you never see people in the background of someone’s Instagram pictures of Sheikh Zayed Mosque? Why it appears they are the only person there when in reality thousands are actually there? This is because there are lots of rope barriers surrounding the central courtyard of the mosque, meaning visitors can’t actually walk across the central courtyard as it is roped off. Visitors walk around the perimeter of the courtyard, and there are a few inlets on the edge of the courtyard where you can stand and take photographs. This is great as it means you won’t get anyone behind you in your pictures! You might get one of the rope barriers in your picture but it is easy to remove with the Touch Retouch app.

The area where visitors walk around the perimeter of the Central Courtyard is very large so there are lots of places you can get photos. Visitors are asked to walk in a clockwise direction around the mosque so just go around again if there’s a place you missed that you would like to take a picture of. 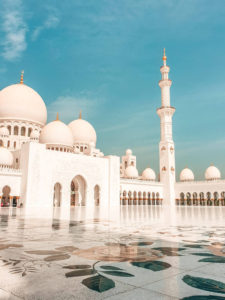 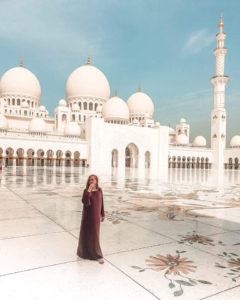 When you walk around Sheikh Zayed Mosque you’ll be walking underneath the archways (at least you will be covered from the sun!). Make sure to look up and admire the intricate detail on the ceilings! The archways are also beautiful, and again there are some parts underneath the archways that are roped off so it is easy to get pictures without other people in. Thank goodness for these roped off areas as it makes photography here at Sheikh Zayed Mosque a lot easier! 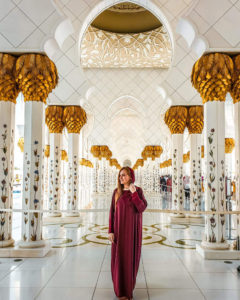 Inside The Prayer Hall

After walking around the courtyard you’ll make your way to The Prayer Hall. This is where you’ll find the humongous Swarovski chandelier and the world’s largest carpet. Much like the central courtyard, the main part of The Prayer Hall is roped off for visitors. You can still see it very well, plus as it is roped off it will again mean you don’t get anyone in your pictures! Also look at all the intricate flower designs on the walls in the room as you enter, they are so beautiful. 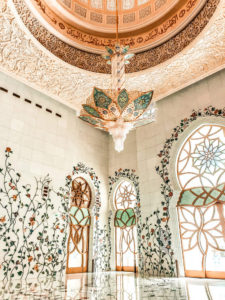 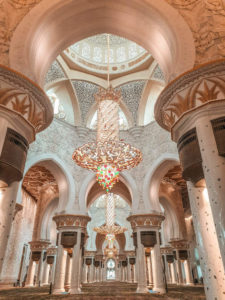 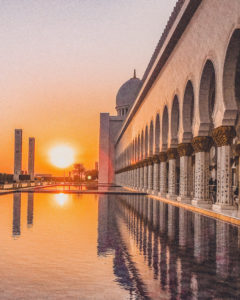 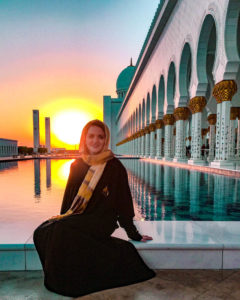 Wahat al Karama park, located just across the freeway from Sheikh Zayed Mosque is perfect for photography and offers an incredible unobstructed view of the mosque. As the park is on the other side of the freeway you can’t walk to it from the mosque (just take a short taxi), which is great as it means there are hardly any people here! Even during sunset it is very quiet with just a few people, mostly just professional photographers. Wahat al Karama park is actually a war memorial so please be respectful here.

We got there about 30 minutes before sunset so we were able to take photographs during the day and with the mosque lit up. Most nights there is a light show and the mosque is lit up purple or white. 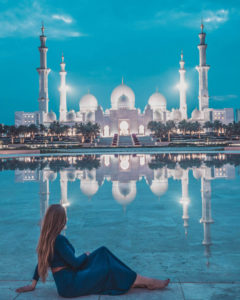 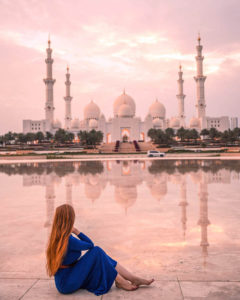 Free tours of Sheikh Zayed Mosque are offered that explain the Islamic architecture of the mosque, as well as aspects of Islamic culture. The daily tours occur regularly and usually last around 45-60 minutes and commence from the East side of the mosque.

Other Hotels in Abu Dhabi 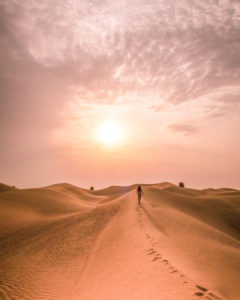 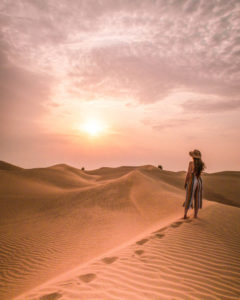 Other Instagrammable Places in Abu Dhabi

Along with Sheikh Zayed Grand Mosque, Abu Dhabi has lots of Instagram worthy spots. Below is just a selection.

Less than an hour away from the centre of Abu Dhabi is the desert and whilst you are here you should definitely go on a desert safari trip. They are very reasonably priced and are a lot of fun! Evening safaris are the most popular and last from 3pm – 9pm. They include pick-up and drop-off from your hotel in Abu Dhabi and you’ll be able to take lots of Instagrammable photos on the sand dunes, go sand boarding, dune bashing and watch the sunset which is so magical!

Louvre Abu Dhabi is located on Saadiyat Island, 10 minutes drive from downtown Abu Dhabi. Louvre Abu Dhabi opened in 2017 and is the first Louvre to open outside France. The building is very impressive with a metallic lattice roof where natural light can pierce through and create a stunning illusion. The collections inside The Louvre include Ancient civilisations til present day from all over the world. You’ll also see famous pieces from Van Gogh, Da Vinci and Monet. 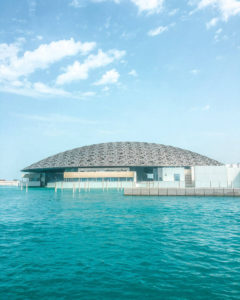 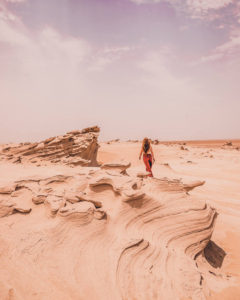 The fossil dunes in Al Wathba Desert are just a 30 minute drive from Abu Dhabi. They are unknown to tourists coming here, and even many expats who live here don’t even know they exist! They are very Instagrammable though! The shapes of the formations are formed by the wind and it is a little eerie here! You definitely need a car to get here as it is in the middle of the desert. You are driving on roads though so don’t worry you don’t need a 4WD. They are a little hard to spot as they are the same colour as the sand so blend in, and they are not as big as you would imagine, so just type in ‘al wathba fossil dunes‘ into Google maps.

Pin it for later! 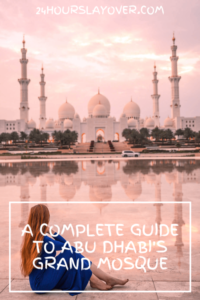 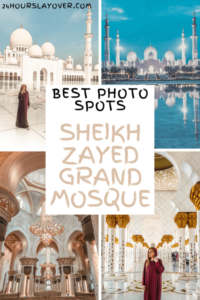 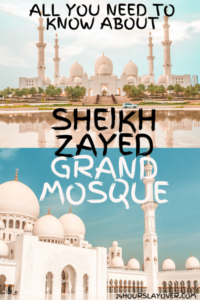