Heading to Tunisia and wondering what are the best things to do in Carthage, or even if Carthage is worth visiting and staying overnight?

The historic city of Carthage is located 20km from Tunis – the capital of Tunisia. Visiting Carthage is one of the highlights of many people’s trip to Tunisia as it is such an impressive and fascinating place to visit.

Carthage is steeped in history and home to many Ancient Roman ruins, including ancient baths, an ancient amphitheatre, necropolis and basilicas.

Carthage is also very easy to reach from Tunis, so there’s no reason anyone heading to Tunisia should skip a visit to Carthage!

This article will show you the most important places and the best things to do in historical Carthage. 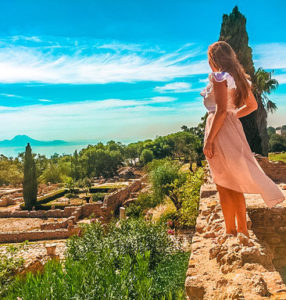 The ancient city of Carthage was founded by the Phoenicians almost 3,000 years ago.

In the fourth century BC it was the capital of the Punic Empire, as well as the most powerful and important city in the western Mediterranean region.

It was one of the largest metropolises in the world, as well as being one of the most influential civilisations of its time.

Carthage Harbour was able to control ships traversing the Mediterranean Sea between the North African coast and Sicily and therefore rapidly became a thriving port and the centre of the Phoenician trade network.

However, Carthage was seen as a threat to the rise of the Roman Empire. After a long and bitter conflict, Carthage fell to the Romans in the Third Punic War in 146BC.

The Romans then rebuilt Carthage and it then became an important part of their Empire. 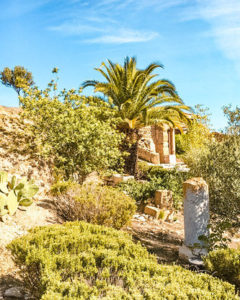 At the end of the 7th Century however, Carthage was conquered under the Muslim Arab invasion of North Africa. Roman Carthage was then completely destroyed, so nowadays only ruins remain.

These ruins make up the UNESCO-listed Carthage Archaeological Park.

If you would like to join a tour of Carthage these are the two best options. A full day trip to Carthage and Sidi Bou Said, as well as a bike tour around the Archaeological Site:

How Long Do You Need To Explore Historic Carthage?

Whether you are visiting independently or as part of a tour, you can explore historic Carthage in half a day. The ruins are spread out around Carthage so there is a fair bit of walking between them.

You can of course get a taxi from one location to the other, especially if it’s a hot day. Just make sure the price of the taxi is agreed before you get inside or that the taxi meter starts when you get in.

Alternatively you can book on an organised tour.

Carthage is a lovely upper class area and you’ll see lots of big fancy houses and Embassies here as you go between the attractions. If you do decide to walk it is a nice relaxing walk.

Alternatively if you don’t want to do an organised tour or have to find your way around on your own, you can hire a taxi driver from your hotel. Get one that the hotel recommends.

The taxi driver will be able to take you to the all sites and wait for you in the car. It should cost you about 100 dinars (£26) depending on your location. 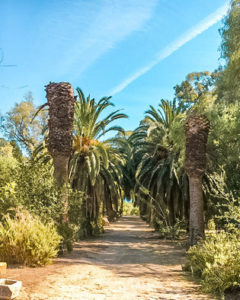 This article will cover the main sights in Historic Carthage. A multi-entry ticket to all the attractions costs just 12 dinar (£3.35) and you should bring cash.

The Carthage Archaeological Park is a UNESCO-World Heritage Site and is one of the top historical sites in Tunisia.

It is an extensive Archaeological Site that comprises of the Antonine Baths, Byrsa Hill, Roman Villas and Carthage Museum. The Archaeological Park sits in an impressive location on a hill overlooking the Gulf of Tunis.

The views out to the ocean from Carthage Archaeological Park and its location with its backdrop against the sea are truly spectacular.

The ruins in the Carthage Archaeological Park are beautiful, steeped in Roman history and surrounded by greenery.

And what’s incredible is that there are barely any tourists here. I literally had the place to myself when I was here. 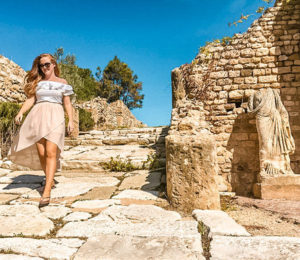 The Antonine Baths (also known as the Baths of Carthage or the Antoninus Baths) are first on the list of things to do in Carthage as their location is just absolutely stunning.

The views out to the ocean from the Antonine Baths and its location with its backdrop against the sea are truly spectacular. 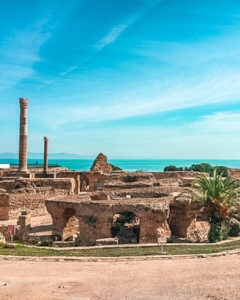 This sprawling 2nd Century Roman Thermae complex is the third largest Roman Baths in the Roman Empire and the largest in Africa! They are honestly so impressive.

This was my favourite part of Carthage as the ruins were a lot more intact than the other locations and you could really use your imagination here.

That being said, when the baths were built in Roman Carthage they were a huge complex: 3 levels high and adorned with cupolas!

Now only the lower level ruins remain but you can still get a really good feel of the grandeur and size of it and how magnificent it was.

There are a couple of signs explaining things and also there are lots of surrounding gardens to stroll round after.

The Antonine Baths are open from 8am-5pm 7 days a week. 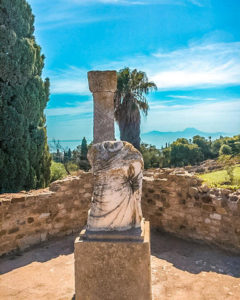 To get to the Antonine Baths from Carthage Hannibal Station takes 2 minutes by taxi or about 10 minutes walking (600 metres). You’ll find the Google maps location here.

If you want to get a taxi from the Antonine Baths afterwards, be advised that taxi drivers right next to the baths will try to rip you off. Therefore it’s best to walk to the main road and flag down a taxi there. 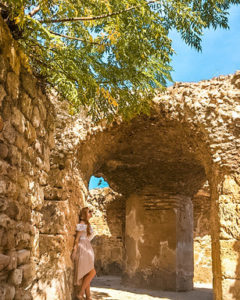 Despite the Antonine Baths being my personal favourite place in Carthage due to its location by the sea, the main Archeological Ruins of Carthage are located on Byrsa Hill.

Byrsa Hill was where the Ancient City of Carthage was built around and there are many great sites to see here. It’s an uphill walk to get there (or short taxi ride), but it sure makes for some incredible views! 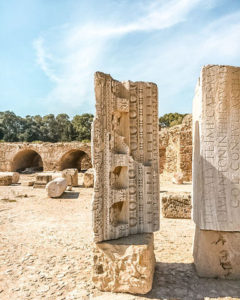 The ruins of Carthage are another must-see place – here you can really get an idea of the layout of a Roman city.

Next to the Roman Villa ruins is the Acropolium of Carthage, which is also known as Saint Louis of Carthage Cathedral.

Located on the top of a hill, this imposing and impressive building was actually a 19th Century Roman Catholic Church and is definitely worth a quick stop. See the Google maps location here.

Nowadays it is no longer a place a workshop – the Acropolium is actually used as a music concert venue! Even though this is not an ancient ruin, it is absolutely worth a look seeing as it is so close.

Behind the Acropolium you will find the Carthage National Museum. It was being resorted when I visited in 2018 but it is now open for visitors.

The Carthage Amphitheatre was one of the largest amphitheatres of the Roman Empire – able to hold 35,000 spectators!

Nowadays the Amphitheater of Carthage is mostly in ruins (as people took the materials for other buildings in the past) but it is still definitely worth a quick stop.

You can even go into the underground parts where the animals would have been kept!

You can see the Google maps location here. 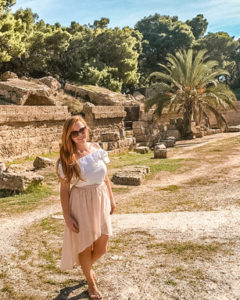 After that you walk 1.5km down the hill towards the Roman Theatre of Carthage. Whilst a very similar name to the other amphitheatre, this is a different amphitheatre. Click here for the Google maps location.

The Punic Port was built by the Phoenicians, however the Romans reshaped it into the unique crescent shape it now has.

It’s located 2 km away from the Amphitheatres and 2.5 km from the Antonine Baths, so I’d advise getting a taxi down instead of walking. Click here for the Google maps location.

As mentioned at the beginning, the Punic Port was very important during the height of Carthage. You’ll find some ancient ruins here and it is pleasant and peaceful to stroll around if your legs still have energy! 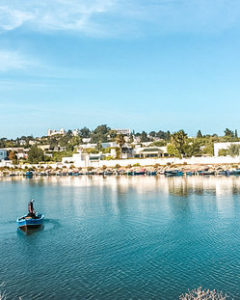 How To Get To Carthage

Carthage is very easy to access by train from the Tunis Marine TGM light rail station, located at the end of Habib Bourguiba. Do not get the train from Gare de Tunis.

The train is the easiest and cheapest way to get to Carthage from Tunis. A one-way ticket costs 0.5 Tunisian dinar (£0.30).

There are several stations in Carthage, so make sure to alight at Carthage Hannibal as this is the closest station to all the archaeological sites.

Trains depart every 15-20 minutes and it takes 30 minutes to reach Carthage Hannibal Stations from Tunis. Trains run until midnight.

(Hannibal was a Carthaginian General during the Second Punic War between Rome and Carthage, and is widely regarded as one of history’s greatest military commanders).

If you prefer to get a taxi to Carthage should cost around 20 dinars from Tunis and around 3 dinars from Sidi Bou Said. Always make sure that the taximeter is running or you agree the fare beforehand. 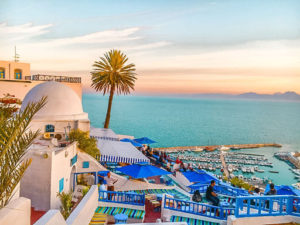 La brise de Carthage has stunning views from the terrace, a private beach – and you can rent a car from here!

Studio Au Coeur de Carthage Hannibal is a lovely studio apartment located in the most convenient location if you want to walk between the Archaeological Sites of Carthage.

Villa Hannibal is a stunning 3 bedroom apartment located right on the water between the port and the Antonine Baths.

Whilst Carthage is a stunning place, I do recommend to stay overnight in Sidi Bou Said, which is the next suburb along on the train line.

Sidi Bou Said is stunning – it’s a lovely white and blue village on the coast. Tunisia’s answer to Santorini! 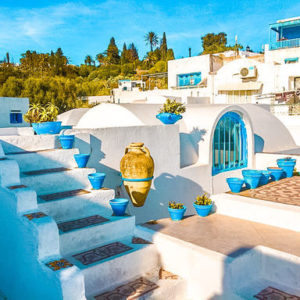 Dar Said is a lovely luxurious guest house in Sidi Bou Said with fabulous views of the sea from the terrace!

From Carthage you can easily take the train to nearby Tunis and Sidi Bou Said. 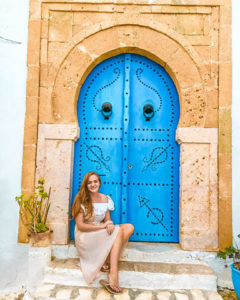 You can also visit nearby La Marsa Beach, a beautiful laid back yet lively beach that is popular for those who want to relax and enjoy the sun.

La Marsa is also a popular place to go in the evening to experience some upmarket restaurants and bars.

I hope you will enjoy your time in Carthage – it is a stunning place!