Having lived in the Middle East for 3 years now, and having travelled solo around almost half of the 22 Arabic countries, I want to share my knowledge with you, as a Western woman, about travelling around Arabic countries. 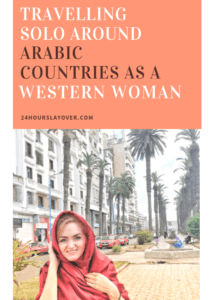 Arabic countries are not usually the top of most people’s holiday destinations, infact France alone sees more tourists than all of the 22 Arabic countries added together! Tell a friend you’re going to travel round an Arabic country as a female solo traveller and they will instantly tell you “be careful!”. The Western world seems to group all the Arabic countries together as one, and has the idea that all Arabic countries are dangerous, which couldn’t be further from the truth. Westerners are often reluctant to travel to the Middle East and North African countries due to a number of reasons: visa issues, political unrest, potential terrorist threats, harsh climates and the lack of facilities. Many Westerners are also skeptical about the area, feel intimidated by the huge culture differences, and how they see these countries are portrayed in the media. As a result, sadly many Westerners are ignorant to learning about and discovering this part of the world, but there are so many beautiful places to be explored and so much history and cultural heritage to discover. Most Arabic countries are also very cheap when compared to Western countries, and the Arabic people are also soooo friendly, infact they are some of the funniest and happiest people I’ve ever met! They are so hospitable and look after you so well and really want you to enjoy their country! 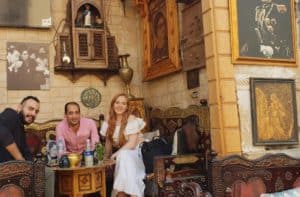 With the locals in Cairo’s Khan el Khalili market, Egypt

Typically Arabic countries are not places where women travel alone and it can seem intimidating at first. Here are my top 10 tips for a Western woman travelling around Arabic countries: 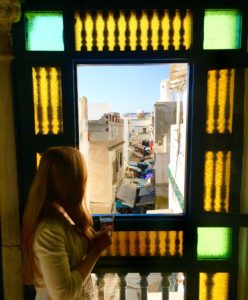 Above the souq at Tunis Medina Old Town

The Lost City of Petra, Jordan 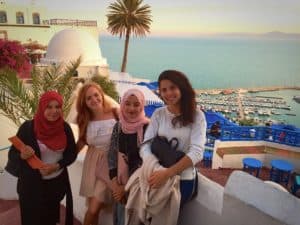 I am still friends with these lovely Tunisian girls to this day! 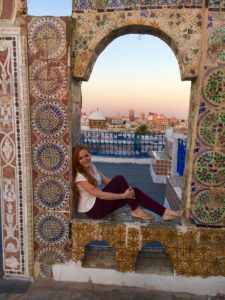 There are many cultural differences between the Western world and the Arab world and sometimes it’s hard to get your head round some of the customs or expectations – even three years later I am still learning; something that people would not even blink an eyelid over, or that is considered normal in a Western country can be considered inappropriate and totally misinterpreted in Arabic cultures. But it’s all about learning and respecting other cultures and I’m so glad for the opportunities I’ve had to discover this fascinating culture. 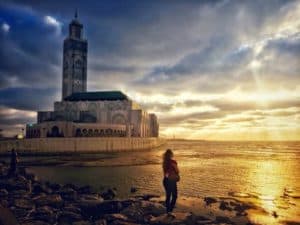 Something that I feel is important to mention is the big misconception the majority of people in the West have about Arabic women: they feel pity on them for being ‘forced’ to cover up and that they are helpless secondary citizens who are controlled by their men. Let me tell you Arabic women are strong minded proud women and don’t appreciate this stereotype, and they often CHOOSE to cover themselves up more (The Quran states women only need to cover their hair, not their face as well).

One thing I also noticed about Arabs is that, as a majority, they aren’t as big on travelling and exploring other cultures as Asians and Westerners are. I’ve been backpacking for years and I can actually count on one hand the amount of Arabic travellers I have met. They are generally more cautious than Westerners when it comes to travelling. 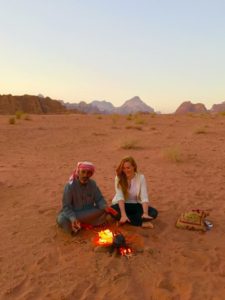 If you haven’t been to an Arabic country and are interested to visit as a solo female traveller but don’t know where to start, I would suggest visiting Jordan or Lebanon first. They are both very open-minded countries with a large percentage of Arab Christians and it is so refreshing to see the two religions coexisting in peace. Jordan is one of the safest and most stable countries in the region and has never suffered from political unrest. They are used to tourists in Jordan and Lebanon and the majority of people in the tourism industry can speak English very well. Beirut, Lebanon’s capital, also has a wild party scene if that’s what you’re after! Check out my blog post 10 reasons why female solo travellers should totally check out Beirut HERE! Both Lebanon and Jordan are steeped in an incredible history, unlike for example the UAE. Whilst the UAE is undoubtedly the safest and most popular Arabic country to visit, it has more expats than local residents so apart from going on a desert safari and visiting the mosque, it can be hard for tourists to get a deep insight into the Emirati culture and heritage as pretty much all the buildings were built in the last 30 years. The buildings are very impressive, there’s no denying that, but you often won’t get much interaction with the local Emirati people.

Many Westerners think Morocco would be the obvious choice for a first trip to an Arabic country, based on its location just a stone’s throw from Gibraltar, but many Moroccan people are far less open minded than the people in Lebanon and Jordan and even the UAE, so I wouldn’t recommend it as a first stop for female solo travellers to Arabic countries. Of course it is a fascinating and beautiful country and I definitely recommend visiting it, but solo female travellers may find it more of a culture shock than Jordan, for example. Each and every Arabic country has beautiful sights and I absolutely loved parts of each Arabic country that I have visited and I met some absolutely wonderful people. Remember there are many different kinds of people and different cultures in the Arabic world – some more open than others and sometimes sadly the uneducated people in some of these countries can be pretty narrow-minded.

Travelling around Arabic countries is definitely not as easy as travelling in Asia and the West, but with a bit of preparation and planning, you’re sure to have the best time and make some amazing friends, I know I certainly have! 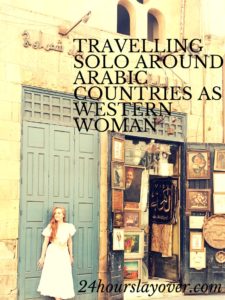 Click here to read my article “10 things to do in Cairo, Egypt“.

I love this article ! It might sound silly but I'm always sceptical when a person from the western countries talk about Arab countries. But you really give some good pieces of advice and explaines the reason. Keep going😉

Aw thank you so much Aisaa! It means a lot!