Seen pictures of this mysterious salt tree in the middle of The Dead Sea, Israel but wondering how to find it?!

I actually stumbled upon this unique beauty by total chance, and only later discovered that many people go to The Dead Sea in search of this salt island tree and it is slowly gaining popularity on social media – in fact it is fast becoming one of the best places to visit in The Middle East.

Read on to discover how to find the only living thing in The Dead Sea (and also the lowest tree on earth!). Also included are my top safety tips for swimming to the salt island tree! 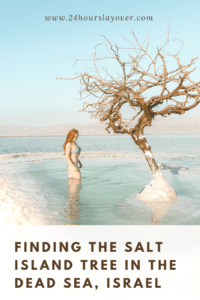 The Dead Sea (which is infact a lake) borders Jordan, Israel and Palestine. At 1424 feet below sea level it is considered the lowest point on earth.

It is called The Dead Sea as there is no visible signs of life (plants or fish) inside the water.

This is due to it’s high salt concentration – it is almost 10 times saltier than the average ocean! No visible signs of life that is, except for one tree.

What makes the tree so special and unique is the fact that it stands alone on a salt formation in the middle of the lifeless Dead Sea. It literally looks like another world.

But how is this tree there if there is supposedly no life in The Dead Sea?

Well, one local man actually paddles out on a paddle board each day and brings minerals to the tree so it can survive in a place where there is no other life. How to get to The Dead Sea tree?

Driving is the quickest and easiest option to get here. It takes about 2 hours to drive here from Tel Aviv or Jerusalem or you can also get a bus from Jerusalem to Ein Bokek.

Click here to view the bus timetable and book tickets.

If you are coming by car, park your car in one of the car parks between the Leonardo Plaza Hotel and Herods Hotel.

You’ll only have to walk a few metres to the beach (Hamei Zohar Public Beach). From the shoreline you will be able to see the island. 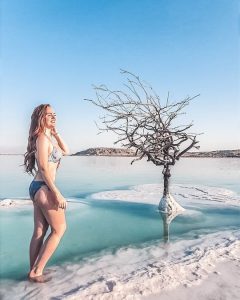 Find the jetty and walk to the end of it (the yellow bit that is sticking out here) so you don’t have to swim as much to get to the salt island – you’ll thank me later.

If you type in “dead tree salt island‘ into Google maps it actually shows you the exact location of the tree.

This has only very recently been introduced onto Google maps as I remember when I was visiting it was not on Google maps. 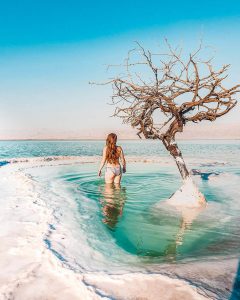 How to swim in The Dead Sea?

Even though the salt island is not far away, to swim to it can be quite a challenge!

Swimming in the The Dead Sea is hard as there is such a high density of salt, meaning it takes you a long time to get anywhere!

You need to be very careful when you are in the water, for reasons explained below.

**Important advice for swimming in The Dead Sea:

Stay upright or swim on your back

– Try and stay upright or float on your back. DO NOT try and swim on your front as your legs will end up going up behind you and floating ontop of the water and you could end up swallowing salt water or getting your eyes wet which will be VERY painful!!!!

– You need to be REALLY careful so as not to splash the salt water in your eyes when you are swimming, otherwise it will really sting and you will probably have to swim the rest of the way with your eyes closed.

– Make small circular movements with your arms, keep your arms under the water and do NOT splash. There is no rush. The water is calm so there won’t be any big waves splashing into your face. 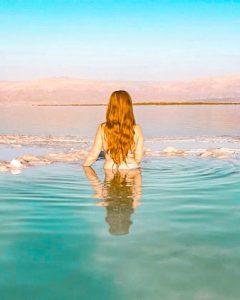 Floating on your back is easiest

– Floating on your back with your legs a little bent is the easiest (and least tiring way) to get there, but it may take a little bit longer to get there (plus your hair will get wet and feel really oily).

– Just lie there and move your arms in circular motions. Swimming upright will get you there a little quicker but is harder.

– Stay upright, keep your legs straight and move your legs forwards and back like you are walking (but with straight legs) whilst doing a breast stroke movement with the arms.

– Some people find swimming upright difficult and that moving their legs hurt their back but I found it ok.

– You use up a lot of energy swimming upright and are more at risk of flipping onto your stomach and getting your face wet.

– This is why many people prefer to just lie there and float, even if it does take a little bit longer.

– If you want to get there by floating on your back, at the shore first wade through the water a little and then gently sit back, like you are sitting on a chair.

Do NOT drink the water

– DO NOT drink the water from the Dead Sea. Even one small sip can do a lot of damage to your nervous system and brain.

Don’t stay in the water too long

– Don’t stay in the water too long (more than 20 minutes each time – the swim should take a little less than this) as it is actually bad for your body – it will begin to get dehydrated, lose vital nutrients and your electrolytes become imbalanced. 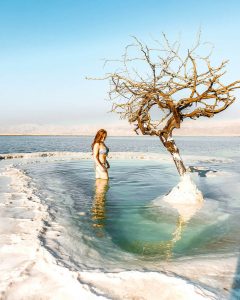 – Make sure you don’t shave at least a day before – even a tiny cut will really sting and burn!!

If you aren’t a confident swimmer:

The water gets very deep very quickly, so swimming is the only way to get to the salt island tree. If you are not a confident swimmer do not attempt to go there – this is for your safety!

Even though I am a very confident swimmer, as I was alone I was a little scared swimming out incase I got into trouble out there.

Whilst you can’t drown in the normal way as the water is so buoyant, people die here every year as they accidentally flip onto their stomach, making it extremely hard to get their face out of the water and turn back over, so they swallow the salt water and die.

I don’t mean to scare you by telling you all this, but I want you to be aware of the dangers that can occur.

If you stay calm and aware (and preferably don’t go alone like I did!) and take your time, hopefully everything will be smooth for you.

TIP! Drink lots of water beforehand and make sure you have sunscreen on (don’t go straight into the water after applying it, wait for it to get absorbed into your skin).

The Dead Sea is located in desert land and is one of the hottest places on earth, so you really need to protect your skin! 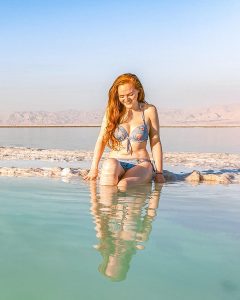 I chose to bring my phone as opposed to my camera so I could keep it in a waterproof phone case aswell.

I also brought a small tripod for my phone so I would be able to get pictures of myself as I went alone.

My camera and camera tripod were far too heavy and bulky to swim with which is why I chose to just bring my phone and compact tripod.

As I didn’t know if anyone else would be on the salt island or not, I wanted to bring the tripod so I could get some pictures of myself on the island.

However, luckily not long after I got on the island some other tourists arrived so they very kindly took pictures for me.

Of course I returned the favour – they didn’t have a camera so I took pictures of them on my phone and then sent it to them when we were back on the shore. I also swam (floated) back with them so I wouldn’t be alone. 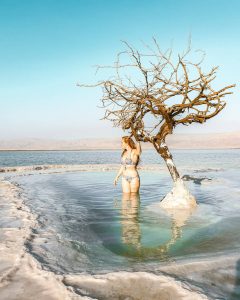 Having a drone here would be amazing, and I would have loved to have brought one there but sadly I didn’t own a drone at the time. It would make for some epic pictures so definitely bring it if you have one!

I also really recommend to bring goggles if you have them to protect your eyes from accidental splashes!

If not, try and bring some water in the bag too if you have space – not only for hydration, but so you can wash your eye out if you do accidentally get salt water in it. 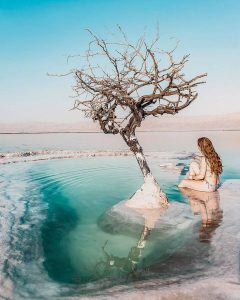 Once you’re on the island, the salt formation is actually really painful to stand on as it is small salt crystals!

Just sit there and enjoy for a bit! There’s a shallow pool that you can stand up in, or you can relax with your feet in the water. Take enough time to relax before you make the journey back again to land!

You’ll notice once you get out of the water that your skin feels oily and it takes ages for it to evaporate. It feels strange but at least your skin feels silky smooth for several days after! 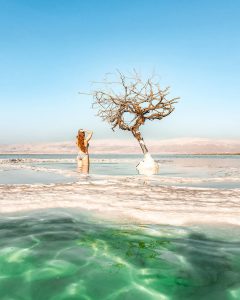 What else to see in the local area

It is the site where almost 1,000 Jews committed mass suicide to avoid being enslaved by Roman soldiers. It is a lasting symbol of Jewish resistance against oppression and is now a UNESCO World Heritage Site.

Climbing to the top of the mountain to the fortress you will see breathtaking views of The Dead Sea.

I was actually on my way driving to Masada National Park, driving on the highway near the shore of The Dead Sea when I saw the salt island tree in the distance so decided to stop and explore there first.

In turn I got to Masada just after closing time, sigh!

And so there are my top tips for how to reach the salt island tree in The Dead Sea. I really hope they were useful and will help you!

If you are heading to Jerusalem check out this detailed guide of Via Dolorosa and The Stations of the Cross,.

Looking for more Middle East inspiration? Check out my posts from Lebanon, Iran and Oman! 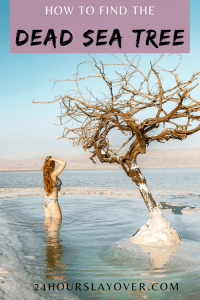 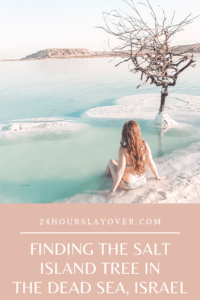 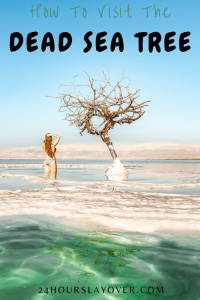