With 60 per cent of the world’s whales found in Australia’s waters, the country is blessed with some incredible whale watching spots. Hervey Bay in Queensland is infact dubbed the whale watching capital of the world! Every year from July to October you can get right up close to humpback whales in the waters of Hervey Bay.

Around 40,000 whales make the annual migration up from the Antarctic waters to give birth to their young in the warmer Australian waters, before heading back down to the Antarctic.

Why is Hervey Bay a great place to see humpback whales?

In other popular whale watching spots in Australia, the whales can be seen just passing by, but what makes Hervey Bay so special is that the whales stay for a good amount of time in the bay as they use it both as a resting place to recuperate from the first half of the tiring journey from the Antarctic, and as a place to stay to gain enough energy for the long journey back.

The calm waters at Hervey Bay are due to the bay being protected by Fraser Island, making it a favourite place for the whales to look after their new-born calves until they adult. The bay is only about 20 metres deep, meaning the waters are safe as there are very few predators for the calves and young whales. 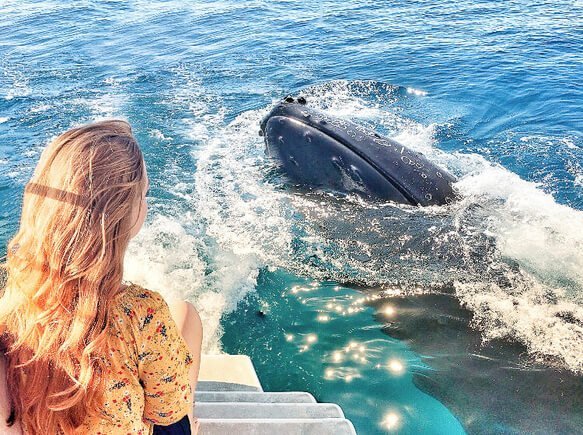 During the whale watching season several boats head out from Hervey Bay each day to catch a glimpse of the magnificent creatures swimming, breaching and slapping their tails on the water. There are lots of whale watching companies in Hervey Bay to choose from, and at first I was overwhelmed trying to pick the best company.

After a fair bit of research online, I chose Blue Dolphin Tours as it seemed to offer the most intimate experience in the bay (small groups, plus a sea level viewing platform which gets you even closer to the whales!) and it was one of the only companies offering a full day out at sea – most other companies just offered a morning or afternoon only.

A couple of other tour companies offer the incredible opportunity to swim with the whales, but it is condition dependent and all on the whales’ terms, so sometimes it is not possible to swim with them, but I was more than happy to just see them from above water. 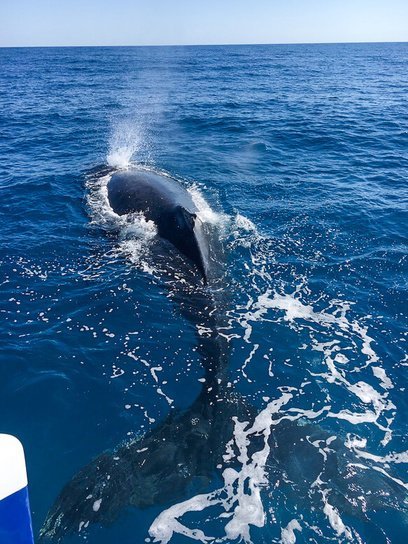 How close can you get to the humpback whales?

The Marine Park Law states that all boats must stop and turn off the engine at a distance of at least 100 metres from the whales, and then it’s up to the whales if they want to swim towards you.

As whales are naturally inquisitive creatures, they often will come towards the boat, jumping out of the water and breaching. Humans are unsure whether breaching (when their flippers splash the water) is a mating call or them playing.

Blue Dolphin Tours is one of the smaller boats that goes out, with a maximum of 24 people: it is just a small group which is good as it means you always have a great view from anywhere on the boat and it feels more intimate.

The viewing platforms are really large and extend all the way around the boat, not just on one side, which is great because everybody has the chance to get close to the whales and have unobstructed views – perfect for those photos and videos!

The day is approximately 07.30-15.30 (with complimentary pickup-and drop off from your Hervey Bay accomodation) but the day can extend longer depending on whale sightings; we got back at 16.20 but you can get back to the Great Sandy Straits marina as late as 17.30. However if you need to be back by 15.30, just tell Pete the skipper and he will ensure you are all back for that time. 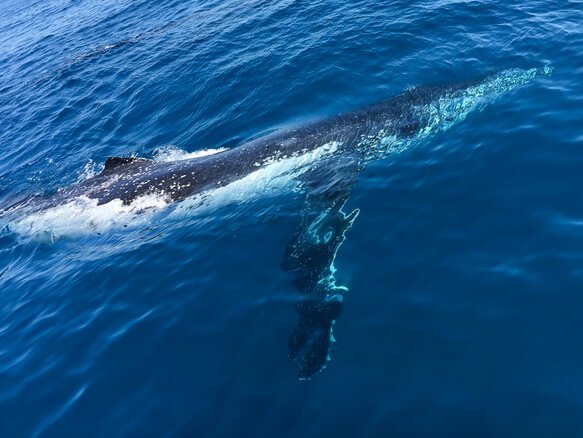 Literally from about 20 minutes into the day we had spotted our first pair of whales about 100 metres away and we watched them swimming and playing together for a good while. It was incredible to watch them interact, especially for many of the group it was their first time to see whales.

Not long after, another pair of whales approached us and came so close that their waves were rocking the boat and we could even feel the spray of water from them as they were coming out of the water! After a few minutes they left and then another whale approached us – he was very curious and he even swan underneath the boat a few times and made the boat wobble as he playfully nudged the boat with his head!

Blue Dolphin’s sailing catamaran has steps at the back of the boat and a viewing deck at sea level so you can be really close to the whales and sit with your legs in the water as the whales swim underneath you! I was sat on these steps and the whale came so close I was literally at arms length from it, it was incredible! All of this before lunch, wow it was working out to be a fantastic day!

A delicious buffet lunch and both morning and afternoon snacks were provided on board, and then in the afternoon we were lucky to see a mother playing with her baby, and even saw a few dolphins.

The staff onboard were so lovely and experienced and really cared about us having the best day possible. They were also super knowledgable, explaining about the different types of whales, their migration and why it is so important to keep our ocean clean as rubbish dumped into the oceans is killing these beautiful, gentle and trusting creatures.

I was so surprised how close the whales got: they came so close that you could see every little detail on them, and at one point the whales’ mouth was no more than 1 metre away from me! It was truly one of those moments that catches your breath and you remember forever. 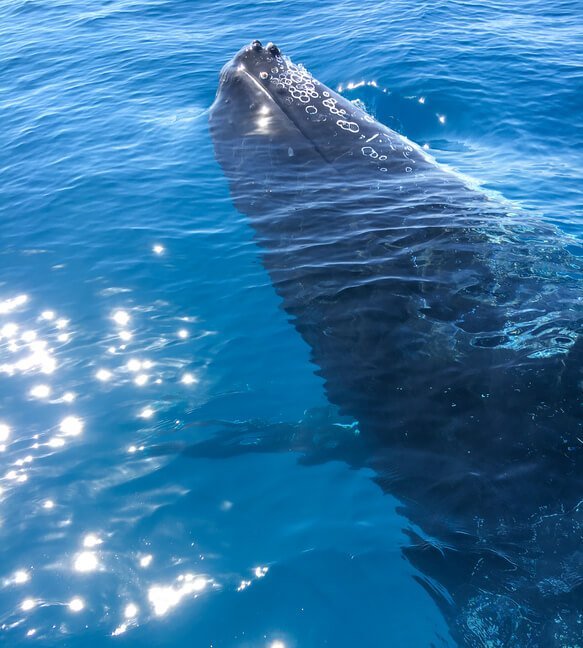 Blue Dolphin Tours also have free wifi onboard and plenty of seating both in the sun and the shade. Sunscreen is also provided free of charge. On the journey back to Hervey Bay we were all out on the deck chatting and soaking up the sun. Pete the skipper came round and spoke to everyone individually, checking how they had enjoyed the day, which was really nice of him.

When to book a whale watching tour

As with all the whale watching companies, book at least a couple of weeks in advance as tours are sold out every day during the whale watching season! Most of the tour operators offer a money back guarantee or another free excursion if you don’t see any whales – that’s how confident they are that you will see them!

I had been on whale watching tours elsewhere round the world and they didn’t even compare to this – in Hervey Bay we saw about a dozen whales throughout the course of the day and they were a million times closer than at whale watching tours in other parts of the world. It was really a once in a lifetime opportunity to get so close to these incredible gracious mammals.

Price of a whale watching tour

The cost for the trip was A$170 and it was worth every single cent – it was a fantastic day and Blue Dolphin Tours were amazing, thanks for helping me tick off this massive bucket list item!! 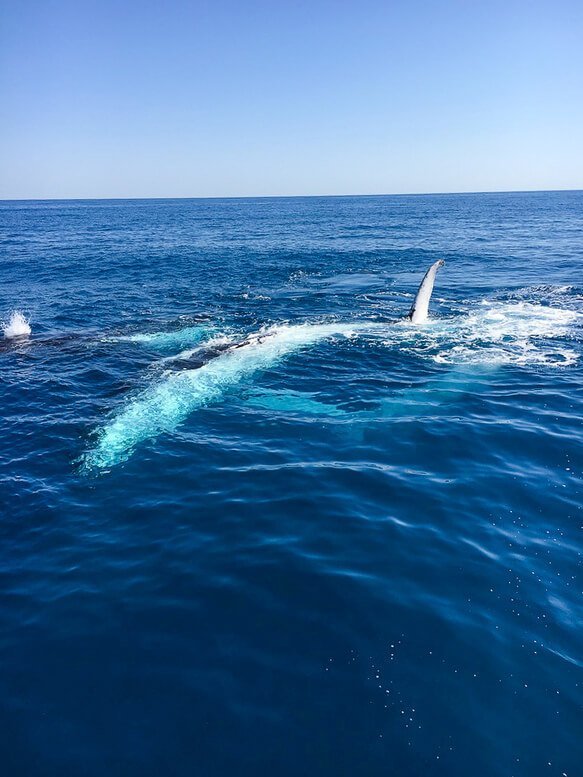 Hervey Bay has five beautiful sandy beaches along its 16km esplanade which are arguably Queensland’s safest and most family-friendly beaches to swim in because of the calm waters and Fraser Island sheltering the bay. The weather is great year round, so even if you’re here when it’s not whale watching season, you’re almost guaranteed to have perfect weather and see people enjoying the beach life!

Hervey Bay is not so much one town, but rather a few small towns merged together along the coastline. There is a laidback seaside vibe and so most restaurants in the area close early. With no real town centre, Hervey Bay is quite spread out and so it is definitely easier if you have a car here.

Hervey Bay can easily be explored in a day, but it is also the starting point for trips to Fraser Island (K’gari) – the world’s largest sand island! Fraser Island is a beautiful UNESCO site that needs ideally 2 full days to explore, and so it is best to make a long weekend of it and combine whale watching in Hervey Bay with a visit to Fraser Island.

How to get to Hervey Bay

Hervey Bay is located 300km north of Brisbane. The easiest way to get there is by flying into Hervey Bay airport (50 minute flight from Brisbane), or by car (3.5 hours drive) which is much quicker than by public transport as the bus and coach companies take a long time (about6.5 hours from Brisbane).

If you can’t make it up to Hervey Bay to see the humpback whales, you can still catch whale watching tours from Brisbane and Surfers Paradise (whalesinparadise.com.au is the best company with 100% daily sightings and has won awards for the past 6 years) for $139 and $99 respectively, which also includes a free Gold Coast waterways cruise.

Alternatively, if you will be heading down to Sydney they also have many whale watching tours there. 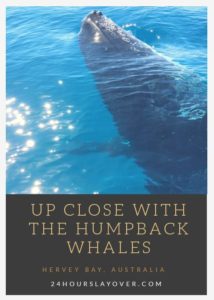 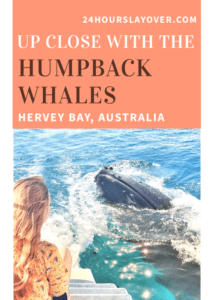