As someone who has visited the Hassan II Mosque in Casablanca several times, here in this article I will tell you all you need to know about visiting this beautiful building. 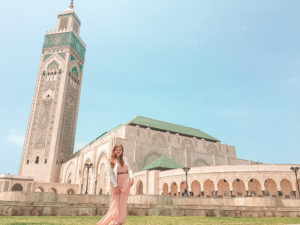 Hassan II Mosque is one of the most beautiful and largest mosques in the world and is an absolute must visit on any trip to Morocco.

It is Morocco’s largest mosque and Casablanca’s main attraction.

In fact it is one of the best places to visit in the whole of The Middle East and along with the Sheikh Zayed Mosque in Abu Dhabi is one of the most famous mosques in the world! 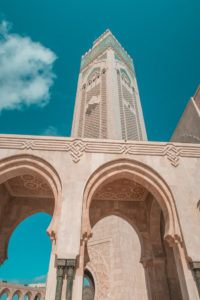 Hassan II Mosque was commissioned by King Hassan II as he felt Casablanca lacked historical and architectural monuments. It was built on reclaimed land in a run-down part of town. 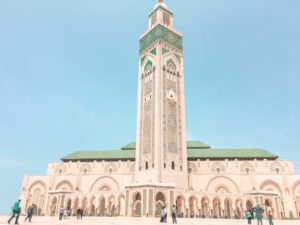 It is estimated to have cost $800 million to build, all of which the money came from donations from the people of Morocco. It is claimed some of the ‘donations’ were less than voluntary and there was a fair bit of resentment from the people. However now that the mosque is built, Moroccans are very proud of the mosque.

Completed in 1993, its newness and wealth makes for a big contrast to the rest of Casablanca. 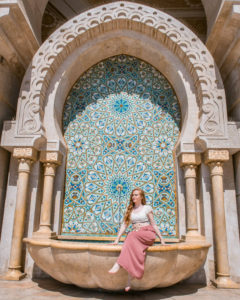 Something really distinct about the Hassan II Mosque is that it sits on a platform over the Atlantic Ocean with part of the floor made of glass so worshippers can pray directly over the sea! Visitors however are unable to access this part.

The Prayer Hall can accommodate up to 25,000 people and there is space for 80,000 people to pray outside the mosque on the courtyard!

There is also a sliding roof over the Mosque for special occasions. 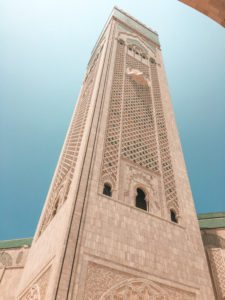 It’s minaret, at 210metres high, is the tallest minaret in the world. It is also the tallest structure in Morocco, and at night a laser shines from the top of the minaret towards Mecca to guide people to position themselves correctly during prayers.

Hassan II Mosque should be the highlight of your trip when in Casablanca – it is a really beautiful building and also one of the only mosques in Morocco open to non-Muslims. 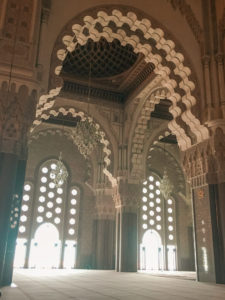 You can get many photos from different angles outside Hassan II Mosque – a popular one being underneath the arches outside the Mosque like in the photo below: 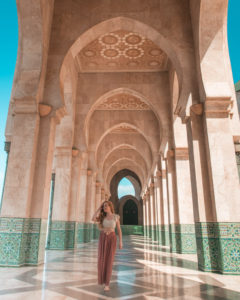 Do try to get here early if you don’t want lots of people in your photos! I was at the Mosque at around 9am when I took these photos.

Another unique angle is to take a photo from underneath the arches looking out towards the minaret. Capturing a bit of one of the arches in your photo to frame the minaret adds depth. 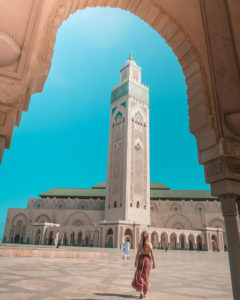 Capturing some of the sea in one of your photos also makes for a different photo – especially if you’re arrived too late and the courtyard is full of people! 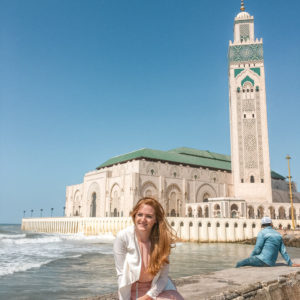 Alternatively, the doors outside the Mosque are so impressive and make a great backdrop! 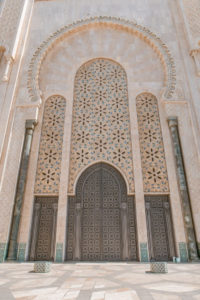 You can also get some great shots of the minaret from below.

Sunset is also great time to photograph the Hassan II Mosque. It’s a busy time as lots of the locals often come down here to watch the sunset, but you can often see spectacular colours here at sunset! 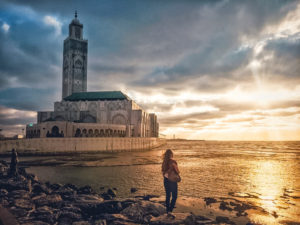 What To Wear When Visiting Hassan II Mosque

Remember Hassan II Mosque is a holy place of worship. Even if you don’t plan to go inside you should come dressed appropriately. This means having your arms, legs, shoulders and chest covered. Preferably in loose clothing that isn’t skin tight.

If it is a really hot day and you are wearing a t-shirt, you may want to bring a shawl in your bag so you can quickly and easily cover your arms, shoulders and chest if you don’t have any long sleeve tops. You must bring a long skirt or trousers with you as your knees must be covered. You can’t enter wearing shorts or a short skirt.

It is not required for women to cover their hair whilst entering the mosque, however you may wish to as a sign of respect. You can just use a normal scarf or shawl.

You will take your shoes off as you enter the mosque so you might want to bring shoes that are easy to remove and put back on. 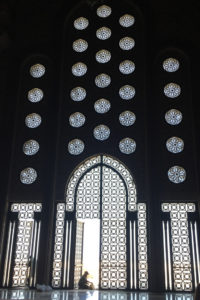 The Hassan II Mosque is one of the few mosques that is open to Non-Muslims, and the inside of the mosque is just as beautiful as the outside so it is really worth a visit!

Non-Muslims are only allowed to enter the mosque outside of prayer times and as part of a guided tour.

Non-Muslims can enter Hassan II Mosque by going on a guided tour on Saturday-Thursdays starting at 9am, 10am, 11am and 2pm (although sometimes this can vary!).

The guided tours cost 120 dirhams (12.50USD), last around 45 minutes and are conducted in English, French, Spanish and German. The earlier tours tend to be the quieter ones, so it’s best to go on the 9am tour before the busloads of tourists arrive. 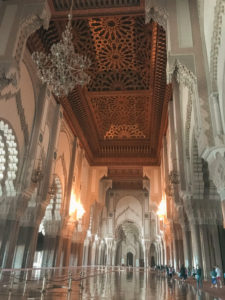 There are no tours on Fridays as it is the Holy Day in Islam. On Fridays and during prayer times only Muslims can enter to pray.

During the Holy month of Ramadan the 2pm afternoon tours are cancelled, and during the summer months additional tours often occur at noon, although it is always best to check beforehand at the Ticket Office in front of the car park to be sure. Or to just make things easier, you can always book a day tour of Casablanca, and they will take you to the mosque as part of the tour on their own time, so you don’t have to stick to the mosque schedule. Here are some good ones: 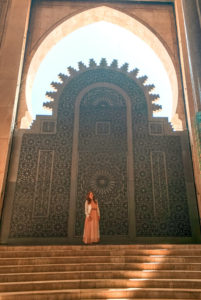 During the guided tour of the mosque you will get to see the Prayer Room as well as the Ablution Hall and the hammams and cleansing pools downstairs – see photos below. 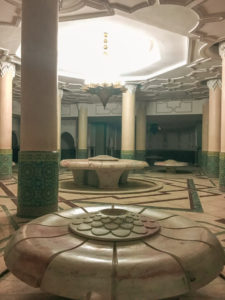 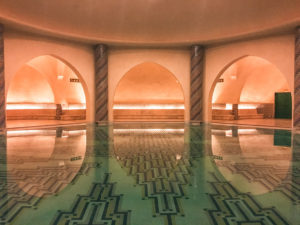 Safety Advice For Visitors To Casablanca:

I would just like to add that, and Moroccans say the same thing themselves, Casablanca is Morocco’s craziest city and the people in Casablanca can sometimes seem less open-minded and welcoming than people from other Moroccan cities.

You need to be cautious in Casablanca, especially when travelling solo as a female. This doesn’t just apply to tourists, but even Moroccans from other cities in Morocco will exert caution here.

Taxi drivers will try to rip you off so always agree a price before you get in the taxi. It also helps if you speak some French as Moroccans speak French fluently and are less likely to rip you off than if you just speak English.

Also always dress modestly, avoid going out alone after dark as a female and be aware of your surroundings and your belongings at all times.

What Else To Do In Casablanca:

Besides the Hassan II Mosque, there isn’t much sightseeing to do in Casablanca compared to other Moroccan cities. Apart from seeing the mosque, tourists can often leave Casablanca, Morocco’s largest city feeling a bit unimpressed. However there are some nice parts and you can get a good feel for the city if you know where to go:

Head to the Corniche – Casablanca’s seafront area. Stroll along the promenade right next to the Atlantic Ocean and enjoy the pristine views out to sea.

There are many nice cafes and beach bars along the way for you to stop and enjoy a delicious Moroccan mint tea!

Head to La Sqala for some lunch – a great restaurant just on the edge of the medina in the remains of the old Portuguese fortress by the port. It’s about a 15 minute walk from the mosque.

La Sqala is a beautiful and decently priced restaurant which offers a quiet break from the hustle and bustle of the Medina in it’s peaceful gardens.

This is one of Morocco’s best restaurants so make sure to visit here if you have the chance! Indulge in a traditional Moroccan tagine and of course, finish it off with some Moroccan mint tea. 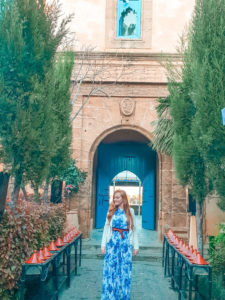 After lunch head down to the souq (Arabic word for market).

Unlike the sprawling souqs of Marrakech and Fes and even Khan El Khalili in Cairo, Casablanca’s souq is fairly compact.

You’ll see lots of souvenirs for sale such as leather bags, typical Moroccan slippers, tagine pots, beautiful paintings and the famous Moroccan organ oil. Don’t buy the argan oil here as the quality is not good (it is very diluted) – you need to go to the south of Morocco (Agadir) to get the real stuff!

Remember to haggle for your products by at least half the price as they will put the price up drastically for tourists!

The old town (medina) is next to the souq, so spend some time wandering round the narrow streets and absorbing the local life. The medina shows the real life in Casablanca in its maze-like alleyways. 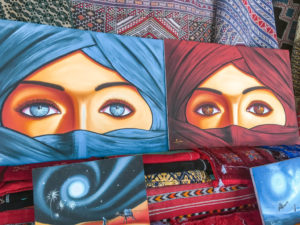 Head to Le Cabestan to watch the sun setting over the Atlantic Ocean.

This is THE place to enjoy the sunset in Casablanca, whether just for drinks or for dinner as well. It is a super stylish bar-restaurant and located in a beautiful setting, but definitely not for those who are short on cash.

You will see a classy, upmarket mix of people here, and inside Le Cabestan I felt a million miles away from the chaos on the streets outside. Definitely the best place to spend an evening in Casablanca if you only have one day here!

PS make sure to head to the toilet here – one of the best toilet views in the world I’m sure! 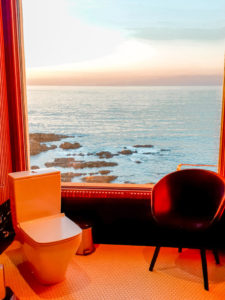