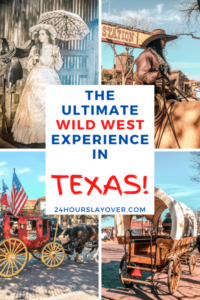 Where is Fort Worth?

The city of Fort Worth is located in Northern Central Texas and is a 40 minute drive from Dallas. The Stockyards are located about 3 miles from downtown Fort Worth, in the Fort Worth National Historic District. First let’s take a look at why the Stockyards are important and what makes them historic:

Why are Fort Worth Stockyards of historic importance?

After the American Civil War ended, cattle driving became a big economical activity in the American West. In the mid-late 1800’s to the early 1900’s cattle drovers would herd cattle from Texas to the railheads in Kansas ready for shipment to stockyards in Louisiana and the East. Millions of cattle from all over the state came through Fort Worth as it was the last stop for supplies and rest on the trail (known as The Chisolm Trail) before crossing over into Indian territory on the way up to the railheads.

When the Stockyards Station was built in Fort Worth it then subsequently became the main ranching and livestock shipping point in Texas, as well as a place for slaughter at the nearby meat packing houses. Fort Worth soon earned itself the nickname of ‘Cowtown’. 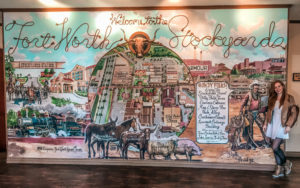 Top of your list of things to do at Fort Worth Stockyards should be to see the famous cattle drive! The cattle drive is the main highlight of Fort Worth and you absolutely can’t come to Fort Worth without experiencing it! The famous Fort Worth Herd happens twice daily at 11.30am and 4pm (the only place in the world to do this!) and is free to watch! Line up along the side of East Exchange Avenue and watch real cowboys on horseback herd the Texas longhorn cattle down the road. 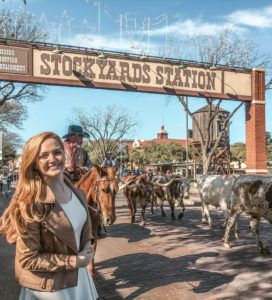 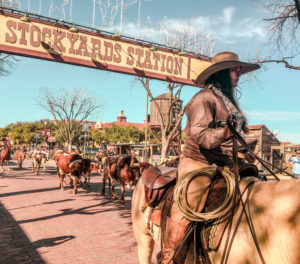 As you can see in the picture, the cowboys and the cattle come quite close to you. Don’t be scared though, they won’t touch you! The herd is big and they walk past quite slowly so you should be able to get several photographs whilst they go past. If that’s not enough and you still want more photos, after the cattle drive you can pay ($5 roughly) to have photos with one of the longhorn cattle. There will always be a cowboy with a couple of them available afterwards for a short while. 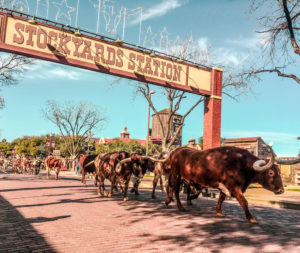 Along with the cattle drive, going to a rodeo show is a must do when in Fort Worth! This is THE ultimate Texas experience! The Fort Worth Stockyards are home to the world’s only year-round indoor rodeo show. The Championship rodeo shows happen from 8pm-10pm every Friday and Saturday in the Cowtown Coliseum on East Exchange Avenue. You’ll see bronc riding, bull riding, roping, barrel racing and calf and mutton scrambles. There are also afternoons shows on at 2.30pm and 4.30pm (Pawnee Bills Wild West Show) most days if you can’t make it in the evenings. Click here to buy tickets for the rodeo.

Even when a rodeo isn’t going on, the doors are open so you can go into the arena. 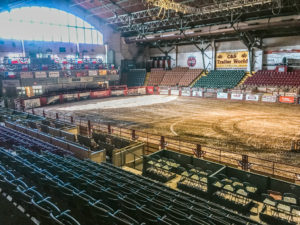 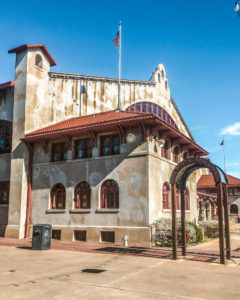 Exchange Avenue, where the cattle drive happens, is the main street in the Fort Worth Stockyards. It is a lively exciting place to walk down, you’ll see the odd horse and cart, and the street is full of historic buildings that hold host to many restaurants, shops and saloons. You can pick up some cowboy boots and a cowboy hat from one of many the souvenir shops here or fill yourself up in one of the steakhouses!

You also shouldn’t miss out on going to one of the honky-tonks (old saloon bars). There are many dotted around Fort Worth Stockyards, for example the historic White Elephant Saloon on East Exchange Avenue. The legendary White Elephant Saloon dates back from the 19th Century and features a Wild West interior. It is a really popular place and has nightly live music and a dance floor. Even if you aren’t staying until late, pop into one of the saloons for the true Wild Wild West experience.

And for the ultimate honky-tonk experience head to Billy Bob’s Texas. Billy Bobs is the world’s largest honky-tonk bar, even featuring an indoor rodeo arena! 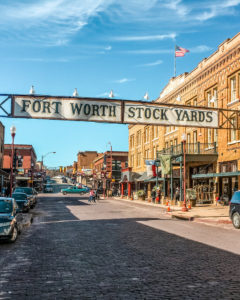 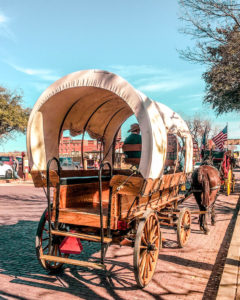 See the stars on the Texas Trail of Fame located outside the Fort Worth Livestock Exchange Building just next to the Cowtown Coliseum. This building was where cattle trade and exchange occurred, and the Fort Worth Cattle Market is described as being one of the greatest cattle markets in the world.

On the first floor of the Livestock Exchange Building you can find the Stockyards Museum. This museum tells the story of Fort Worth’s role within the cattle drive in an interesting way. 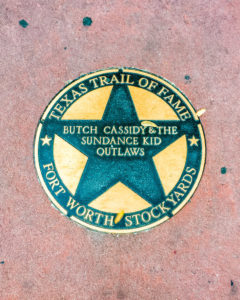 The longhorn cattle that do the cattle drive actually live here at the Stockyards. If you go behind the Livestock Exchange Buildings before or after the cattle drive you can see them here in their pens, where they reside.

Step inside the historical Cowboy Hall of Fame so see tribute to the cowboys of the area. Inside the Hall of Fame you’ll also find the Jersey Lilly Old Time Photo Parlour. Treat yourself and be transported back in time to 1880 for a vintage photoshoot. You can choose from several different backgrounds (saloon, stagecoach etc), props and genuine period costumes to wear. Costumes include cowboys & cowgirls, saloon girls, Southern Belles & Fancy Ladies, gunfighters, gamblers and soldiers! For the photoshoot you can only choose one costume so it took me ages to decide as all the outfits were so lovely! In the end I went for this stunning dress! I loved the dress, the background and the props and it was actually really fun doing the photo shoot!

This is vintage photography so make sure you get your pose right – you only have 4 shots, that’s it! Your pictures will be printed in the antique sepia tone so they will look really authentic – I totally loved mine. Photo packages start from $27.95, click here to go to the official website for more information. 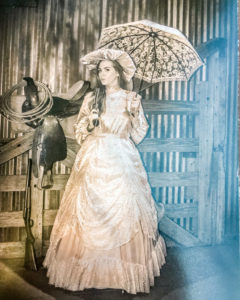 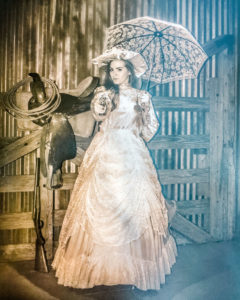 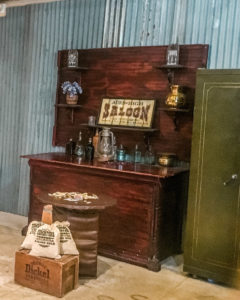 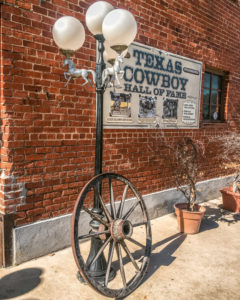 Are the Fort Worth Stockyards worth visiting?

Absolutely! Fort Worth Stockyards are one of the biggest highlights in Texas for many people, myself included! I literally felt like I had stepped right into the middle of a Wild Wild West movie – it was incredible! Growing up I would watch Wild West cowboy movies, and I just couldn’t believe that this kind of place actually existed. I felt like I had stepped back in time here and was totally lost for words in awe when I met some real cowboys and cowgirls down at the Stockyards!

If you want an authentic experience of Texas and the Old West with real cowboys, you want to learn about the history of the area, or just want to have fun watching a rodeo – the Fort Worth Stockyards are not to be missed.

For more information on the Fort Worth Stockyards visit their official website here. 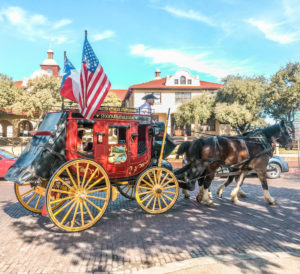 The city of Fort Worth is also deserving of a visit. The National Cowgirl Museum and Hall of Fame ($10 entrance fee) and Texas Civil War Museum (entrance $6) are worth visiting to learn more about the area’s history. Down at Sundance Square you can grab some famous American West food at the many steakhouses here.

When is the best time to visit Fort Worth?

The summer months are extremely hot in Texas. Spring and fall (autumn) are good times to visit, when temperatures are cooler and visitor numbers are lower.

How to get to Fort Worth Stockyards:

Other places to visit in Texas:

Texas is one of my favourite states in the whole of the US as there are just so many exciting things to see and do here! Head down to Austin and San Antonio for some fun or you can even head over to the border town of El Paso and cross over to Ciudad Juarez, Mexico! Click here for 101 bucket list ideas to do in Texas! 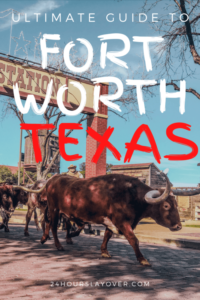