We’ve all heard of Dubai, but how much do you actually know about it? Where even is Dubai located?

Is Dubai a country?

Is Dubai the capital of a country?

The answer to these last two questions is actually no, which comes as a surprise to many people! I’ll admit, before I moved to the Middle East I didn’t know much about Dubai either. If you’ve got a stopover in Dubai or you want to spend a few days there as you’re intrigued to see this fascinating city, read on to know more! 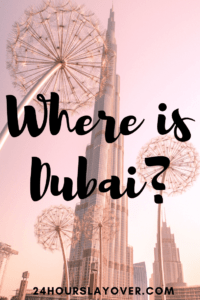 Which country is Dubai in?

Dubai is located in the United Arab Emirates (UAE). It is not the capital of the country, like many people think it is. Infact it is the second city of the UAE. Abu Dhabi is actually the capital, despite Dubai being the much more famous and bigger city of the two. Both cities are very close in distance though: there is less than 100 miles between them and it takes just over an hour to drive between the two.

The UAE is situated in the Middle East – more specifically in the Gulf (or Arabian Peninsula). This is the small peninsula of land separating Africa from Western Asia. If you look at the world map below, you will see the UAE is nestled between Saudi Arabia and Oman, facing the Persian Gulf (which separates the UAE from Iran). Other countries in the Gulf include Bahrain, Kuwait, Yemen and Qatar.

How and when was the UAE formed?

The UAE is a relatively new country, created in 1971. Prior to this the region consisted of independent Sheikhdoms (also known as Emirates). The Emirates were connected as a British protectorate territory as the British had a large naval power there. The area was known as the Trucial States due to a series of truces between the British and the Emirates. In 1971 however, the British withdrew from the Gulf.

Sheikh Zayed bin Sultan Al Nahyan was at the time the ruler of the Emirate of Abu Dhabi. He seized the opportunity to bring the Emirates together and unite them, formed a new country: the United Arab Emirates. Sheikh Zayed therefore became the country’s first President until his death in 2004, and is often referred to as the Founding Father of the UAE. He named Abu Dhabi the capital of the country, and even though the UAE is less than 50 years old it has developed very rapidly in such a short period of time. 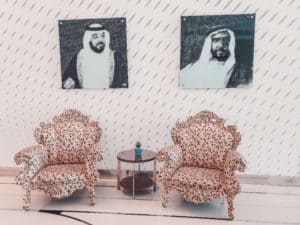 Sheikh Zayed on the right

The United Arab Emirates is divided into 7 Emirates (regions): Abu Dhabi, Dubai, Ras al Khaimah, Fujairah, Sharjah, Ajman and Umm al Queim. Whilst everyone has heard of Abu Dhabi and Dubai, the remaining Emirates are not that well known and are much smaller and very underdeveloped in comparison.

Who is the leader of Dubai?

The Emirate of Abu Dhabi makes up the majority of the land in the UAE, although most of the land is just desert. Infact 80% of the UAE is actually made of desert. The satellite image below (taken from Google maps) shows the located of Dubai in comparison to the rest of the UAE. The orange area is sand from the desert, which demonstrates just how harsh the landscape and climate is. The country has 3 distinct terrains: desert inland, mountains in the north-east, and the coast (consisting of beaches and wetlands).

Why is Dubai so rich?

The discovery of oil off the coast of Abu Dhabi changed everything in the 1950’s for the UAE. It’s crazy to think only a few decades ago the cities of Abu Dhabi and Dubai didn’t exist as we know them today and people . The land where they lie was all sand, and they were mere fishing and pearl diving towns and tribes still wandered in the desert.

Will Dubai run out of money? Who knows. Of course the oil will run out one day. The leaders are starting to realise this and so are putting all their efforts into making Dubai the best city in the world. They have succeeded in making it into a top tourist destination, and the ever-increasing architecture and well-known buildings here continually amazes the world.

What are some popular things to see and do in Dubai?

Of course you need to see the Burj Khalifa, the world’s tallest building. Underneath the Burj Khalifa just outside Dubai Mall are the Dubai Fountains. Every evening from 6pm-11pm on the hour and 30 minutes past the hour is a 5 minute dancing fountains performance, like the one in Las Vegas, it is so beautiful!

The stunning Atlantis The Palm Hotel (a copy of the Atlantis in The Bahamas) is worth a visit, not only for the fabulous architecture but for The Lost Chambers Aquarium.

Whilst you are in Dubai make sure to visit the desert as it is so nearby and a really fantastic experience! There are many desert safaris you can do, or you can camp overnight, or you can even stay in a luxury hotel in the middle of the desert. Click here to read about the world’s most luxurious desert resort, located just a short drive from Dubai!

Click here to read my in-depth guide about all the best places to see in Dubai! 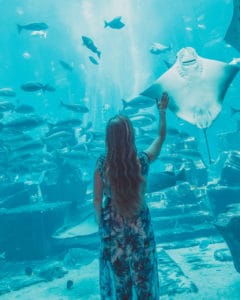 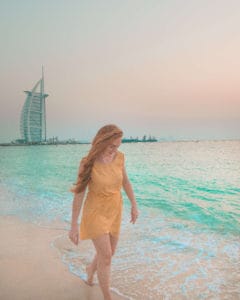 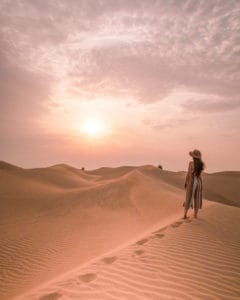 Dubai is one of the safest cities in the Middle East and infact the world! As the laws and penalties are strict, it means the crime is very low. All taxis are equipped with CCTV so even if you leave something in a taxi you almost always get it back! Many tourists and ex-pats feel incredibly safe walking around in Dubai, even female solo travellers. Click here to read more about female solo travel in the Middle East.

What is the currency in Dubai?

The UAE dirham is the currency used in the UAE. The dirham is pegged to the US dollar, with 3.6 dirhams always being equivalent to 1 US dollar. There are many currency exchange places in Dubai and you won’t get ripped off.

Dubai enjoys very peasant weather from October to April, with temperatures around 28 degrees Celsius. During the summer months however, the weather in Dubai becomes extremely hot, with temperatures at times reaching 50 degrees Celsius. If you do visit during this time though, don’t worry too much as the air-conditioning everywhere is great (plus the hotels are a lot cheaper). 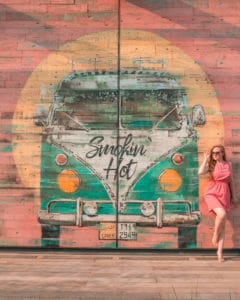 How to get to Dubai?

Emirates is the major airline that operates in and out of Dubai. They fly to over 160 destinations in 85 countries. Dubai is quite literally located in the middle of the world, meaning it is very easy to connect to from any country. A 4 hour flight from Dubai can take you as far as Europe, Asia or even Africa, that is how centrally located it is!

Bear in mind that all relationships between the UAE and Qatar were severed in 2017 however, meaning it is not possible to travel between UAE and Qatar.

Do you need a visa to visit Dubai?

Many nationalities get a 30-day or even a 90-day visa on arrival for free when they enter the UAE. To see which countries are eligible, click here. If you need to apply for a visa prior to entry in the UAE, click on this link.

Dubai is a spectacular city to visit and was certainly made to impress. I don’t think anywhere else in the world can you see so evidently the contrast between ancient traditions and modern technology. There are so many interesting and unique things to do in Dubai and it is definitely worth putting on your bucket-list! Have you been to Dubai? Let me know in the comments below! 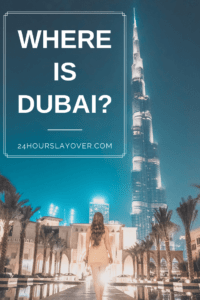