Imagine having breakfast in Brazil, lunch in Paraguay and then dinner in Argentina. 3 countries in one day! Well it’s totally possible when you are visiting Iguazu Falls! On our last day on the Brazilian side of Iguazu Falls we decided to nip across to Ciudad del Este in Paraguay  for a few hours before continuing our journey into Argentina. Read on to find out all about Ciudad del Este as well as safety and more importantly, how to cross the border. 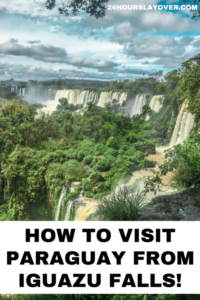 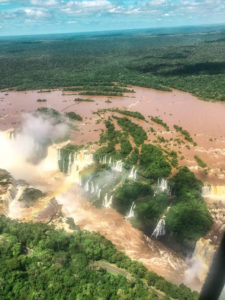 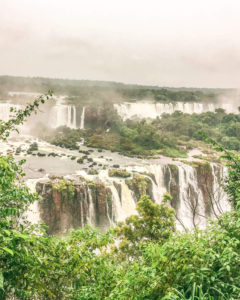 Paraguay is a landlocked country in South America. It is also one of the least visited countries in Latin America and there’s several reasons for that. Unlike most of the other Latin American countries it lacks colonial cities and beaches or ancient ruins and stunning landscapes. There are not that many well-known tourist sights there.

Why do people go to Ciudad del Este?

Ciudad del Este (the second largest city in Paraguay) is actually most well-known for it’s shopping! Not just amongst the local people from Paraguay, but even more-so amongst Brazilians! Imported goods and luxury brands are sold here in Ciudad del Este for rock bottom prices. Therefore thousands of Brazilians take advantage of this and come across the border to buy goods for a lot cheaper than they can in Brazil. The market is heavily taxed in Brazil, whereas almost all of the imported goods in Paraguay are tax-free. So many Brazilians come across to Ciudad del Este and avoid paying the expensive taxes in Brazil.

The black market here therefore is huge. Many Brazilians buy many products here and then re-sell the items for a much higher price (sometimes as much as 50-80% more!!) when they are back in Brazil. The Brazilian Government tries to clamp down on this smuggling, so do be aware the crossing back from Paraguay into Brazil can sometimes take a long time.

Ciudad del Este is full of department stores, shopping malls and street stalls selling mostly electronic, household appliances and clothing. Literally everywhere you look people are selling things! It’s a bit of a hectic place but it’s truly fascinating to visit! Even though it’s very busy here, I liked that we blended in. Being a typical border city it is not at all touristic. Nobody was trying to take advantage of the fact we were tourists or trying to get us to buy from their stalls (which is rare in today’s world!). People just went about their everyday life, it was nice.

There are many designer items for sale here but also beware of fakes! And be prepared to haggle if you are buying from a market stall or a street vendor. Obviously don’t haggle if you go into one of the department stores though. Note that you can pay for items in USD or Brazilian Reale here in Ciudad del Este – bonus!

Whilst the three S’s describe the city well: sleaze, shopping and smuggling, if you mind your business you should be fine. The city does give you the feeling that you’ve taken a wrong turn and ended up in the dodgy part of town. Especially when you see the security guards standing with shotguns outside many stores and banks! But don’t be alarmed, if anything it made me feel safer. Dynamic Ciudad del Este certainly has an interesting vibe and even though it is supposed to be one of the most corrupt cities in South America I didn’t feel unsafe when I was here. 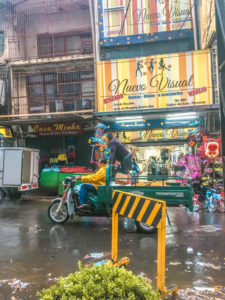 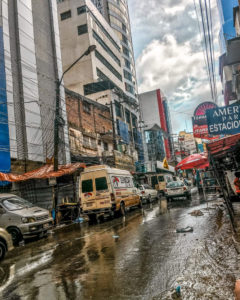 Iguazu Falls features on many of the best bucket lists, and is voted one of the New Natural Seven Wonders of the World. Visiting Iguazu Falls from the Brazilian side only requires half a day or so (it is the Argentinian side that you typically will spend longer on). Therefore after you have visited the Brazilian side of Iguazu Falls you can easily hop on a collectivo (local public bus) in Foz do Iguacu bound for Ciudad del Este. Ciudad del Este is just over the Paraná river from Foz do Iguacu and it will typically take maybe 20 minutes to get there. The local buses leave often from the bus terminal, or you can even take a taxi across.

Crossing into Paraguay on the local public buses is pretty easy but it can sometimes be a little confusing. You see, sometimes buses go directly into Ciudad del Este and don’t stop at the border. This is because it is an open border for locals so they don’t actually need to stop at the border. Therefore try and find out before you get on the bus if it will stop or not. By the way – some buses will tell you that they stop but they actually don’t.

Fortunately many nationalities get a 90 day stamp on arrival and do not need a visa to enter, so even if you hadn’t planned to visit Paraguay beforehand you can still visit. If you are unsure there is a Paraguayan Consulate in Foz that you can visit beforehand. Click here to view it’s location.

What if I don’t get my passport stamped?

Whilst it is not advisable, many tourists do actually cross the border into Paraguay without getting a stamp. Some forget because the bus didn’t stop, or some just don’t bother. You can easily bypass Immigration like the locals do, but if you do then be prepared to pay a big fine if you get caught. The Paraguayan border guards know that many tourists don’t get stamped in and so they sometimes stop them when trying to leave Paraguay. If they catch you with no proof of legal entry they will often bribe you to pay a big fine, or you can even get arrested and deported. If you do not get a stamp, do not panic – most people have no problems exiting later. Just be aware and preferably have someone with you who speaks Spanish if you are not fluent incase you come into any troubles when leaving Paraguay.

From the Brazilian side of Iguazu Falls it is pretty easy to head across to Paraguay. From the Argentinian side though it is a little bit tricker. This is because you need to pass through Brazil first to reach the border crossing. Leaving Argentina, entering and then leaving Brazil, then entering Paraguay – it can be a lot of border crossing (and stamps!). So definitely try and visit Ciudad del Este once you are already in Brazil, it’s a lot quicker.

To get to Ciudad del Este from Puerto Iguazu:

Alternatively, follow the instructions below for a more simplified version:

If you do not have a visa for Brazil:

If you need a visa to enter Brazil but don’t have one you can still visit Ciudad del Este from Argentina. From the Puerto Iguazú bus terminal in Argentina you can take a bus to Ciudad del Este. The bus will go through Brazil without stopping and straight across the bridge into Ciudad del Este. (You will need to get off at the Argentina border crossing and obtain an exit stamp though. You can then get back on the bus for the remainder of the journey).

The bus from Puerto Iguazú to Ciudad del Este costs AR$5 (£0.70). It leaves every hour from platform 7 every hour. It takes about 45 minutes to get to the bridge which is known as the Puente de la Amistad (“Friendship Bridge”). This bridge connects Foz do Iguacu in Brazil to Ciudad del Este in Paraguay.

The bus will be marked either Foz, Ciudad del Este or Paraguay. MAKE SURE THE BUS WILL TAKE YOU ALL THE WAY ACROSS THE BRIDGE INTO CIUDAD DEL ESTE BEFORE YOU GET ON THE BUS!! Otherwise it will drop you off before the bridge (still on the Brazilian side). You will have to walk through Immigration to exit Brazil. The Brazilian Federal Police could stop you and question you as you will have no visa or proof of entry. If this does happen, explain you just wanted to visit Ciudad del Este, you didn’t know the bus wouldn’t take you all the way, and that you will be returning straight back to Argentina (Puerto Iguazú) that same day. However, best to avoid all the drama by checking the bus is going straight through to Ciudad del Este. 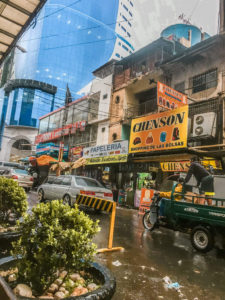 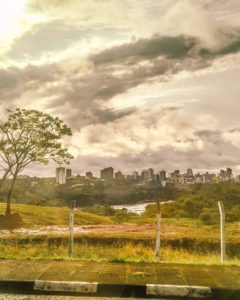 Crossing from Argentina to Ciudad del Este by ferry:

Another way to get to Ciudad del Este from Puerto Iguazú is to take the ferry, thus avoiding Brazilian territory. The ferry runs every hour during the day and also costs AR$5. The ferry drops you off in Paraguay just a couple of kilometres from Ciudad del Este at the Tres Fronteras. This is where the Rio Paraná and Rio Iguaçu join. You can then take a bus to Ciudad del Este . There are immigration facilities on both sides of the river so the ferry can be used for official border crossings as well as for day tours.

Getting back into Brazil from Ciudad del Este

As I mentioned earlier, crossing back into Brazil can sometimes take a while. There is always a queue of traffic as the Customs Authorities will be checking inside vehicles to check that everything brought into Brazil is for personal use only. Therefore allow enough time if you have any transport that you need to catch later out of Foz do Iguacu.

You will save a considerable amount of money if you choose to stay overnight in Ciudad del Este as opposed to Foz do Iguacu.

Nearby places to visit from Ciudad del Este:

Monday river waterfall (Salto del Monday in Spanish) is the most beautiful and impressive waterfall in Paraguay. Sadly though it gets overlooked because of the nearby Iguazu Falls so not many people visit it. Entrance is 36000 Paraguayan Guarani (£4.50) for tourists.

Itaipu Dam is also worth visiting if you have the time. It is actually one of the Seven Modern Wonders of the World but many people haven’t even heard of it! The huge hydroelectric dam is shared between Paraguay and Brazil and it was the world’s largest power station for a long time (until China built the Three Gorges Dam). Entrance is free but you need to go on the free tour. And don’t forget your passport as you won’t be allowed in without it. From Ciudad del Este take a bus bound for Hernandarias and ask to get off at Itaipu Dam (you’ll have to walk 1 kilometre to get to the Visitor Centre). The bus costs 3000 Paraguayan Guarani (£0.40).

If you have time take a taxi to the nearby tri-nation viewpoint Tres Fronteras. It is where the borders of Argentina, Brazil and Paraguay meet at the confluence of the Iguazu and Parana rivers. You can even get the ferry across to Argentina here (see above). 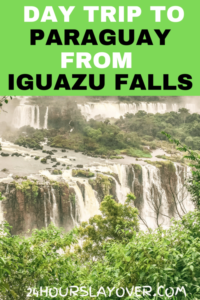