Garbage City. Sounds like a joke right? I wish it was, but there is actually a neighbourhood in the Egyptian capital of Cairo named Garbage City. The name is on the tin: this small city is piled high with garbage and many people live here. I recently went round this poor, almost forgotten slum of Cairo to see how the life is. Read on to discover Garbage City: the side of Cairo no-one wants you to see. 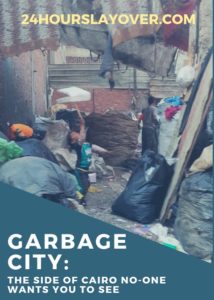 Now I’m not going to make Cairo out to be a wonderful and prosperous city – I have to tell you how it really is, and Egyptians will agree with me on this. This is a city where a lot of improvements are needed. Of course, there are some nice areas of Cairo, but on the whole it is a very dusty and dirty city, there are so many flies and extreme poverty exists here. In almost every direction you look you’ll see rubbish scattered on the streets, many people don’t work and the life there is hard.

Whenever I travel, I always want to really get underneath the surface and see the local way of life, how they live, the daily struggles and learn more about the local people. I want to see the good AND the not so good parts of places when I travel, unlike most tourists who just want to see a country’s highlights. Especially with Egypt; yes the Ancient Egyptians were one of the most powerful and richest civilisations in the world, but times have changed drastically and so it is important to look at the country in the present-day and not just hang onto it’s glorious past. 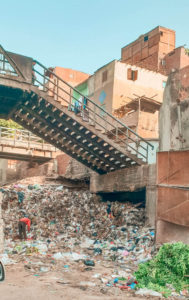 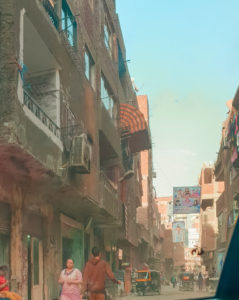 Garbage City: the side of Cairo no-one wants you to see

I had heard about Cairo’s ‘Garbage City’ and was determined to see it. It is a very poor poverty-stricken Christian slum in Cairo at the base of Moqattam mountain, where about 60,000 people literally live in the garbage. It is the world’s largest garbage neighbourhood and it is covered in rubbish: the streets, the roofs, everything. This is a result of Cairo never having an efficient garbage collection system despite it’s vast population.

All the rubbish from the city gets collected by the local Zabbaleen (‘garbage collectors’ of Garbage City) and taken here. The residents then spend their days separating the rubbish from the recycling and then selling what materials they can from it to make a living. You wouldn’t think they would be able to make much of a living from it, but the residents are very efficient and surprisingly over 90% of the rubbish gets recycled and so they are able to make enough money and have generated an economy and many jobs as a result. 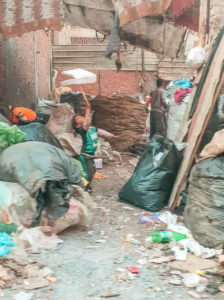 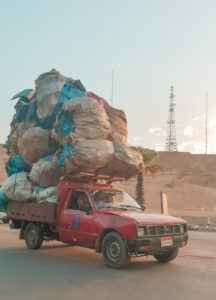 The history of Garbage City

It breaks your heart to see this forgotten community of Cairo living like this in dire poverty but it was such a sobering experience and an eye opener to visit this place. We actually stopped and spoke to a resident who was born and raised in Garbage City and he gave us more of an insight into their life and background. The people living in Garbage City are descendents of farmers who migrated to Cairo from Upper Egypt in the 1940’s. They fled from poverty and poor harvests and came looking for work in Cairo.

At first they continued to raise animals: primarily pigs and chickens, but they actually found it more profitable to collect and sort out the city’s rubbish instead. They would sell what they could, and the organic waste was used to feed their animals. He told us that nowadays, even though some of the residents can actually afford to live elsewhere, they choose to remain living here as they are Coptic Christians (a minority in the predominantly Muslim country) and so they prefer to stay together in their own religious community. 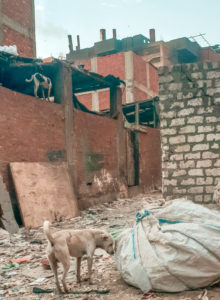 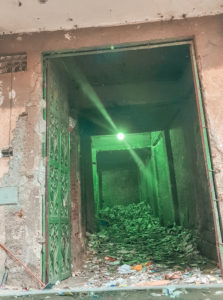 Going through Garbage City you will see men, women and children sorting through the rubbish and the bad smell hits you like a slap in the face. You definitely need a strong stomach and I would strongly advise driving through the area as opposed to walking, so you don’t have to continuously smell the bad air. The living conditions are very unhealthy and poor and there is a lack of sewers, electricity and running water, making disease rife in the area and the lifespan short.

Going past the buildings you will see room after room packed floor to ceiling of big bags of rubbish with the locals sorting it. The life is very hard, their jobs are very demanding and tiring, and they have little to no chance of ever escaping this life. However, they are very resourceful and hardworking kind peaceful people and are thankful that they have jobs and enough money to get by. 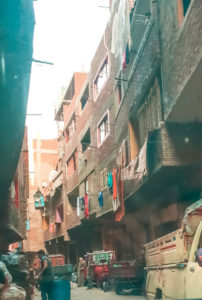 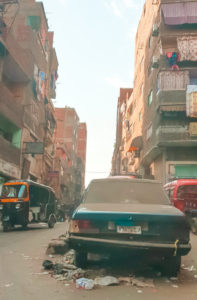 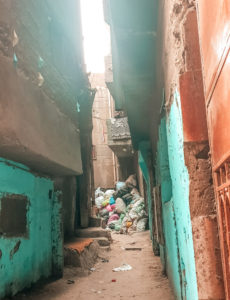 Adventuresome and inquisitive travellers such as myself may want to visit this area, but please don’t take photos of the people here without their permission. This is their home and they know a lot of people, especially the majority of people from Cairo, look down on them and are disgusted with their living conditions, so please be sensitive. They are very happy to welcome people who are genuinely interested to see the area and I didn’t feel unsafe for one second here.

The Cave Church at Garbage City

Another reason why I was keen to see Garbage City was because I had heard about it’s fascinating cave church and was eager to see it for myself. Hidden inside the chaos of Garbage City is the most extraordinary church carved out of one side of Moqattam mountain. It appears like a cave and it is really a spectacle to see. Scenes from The Bible are carved out onto the walls and if you walk up to the top row of seats and turn round, you will look out onto the whole of Garbage City. 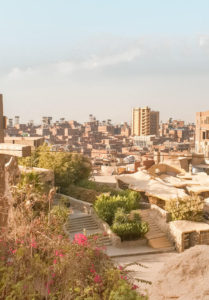 The Cave Church is also known as St Simon’s Church and it is the largest Church in the Middle East, with seating for up to 15,000 people. It’s really incredible. All the Coptic Christian residents of Garbage City are very proud of this Church, built in 1975, and feel more at home in the area since the church was built. The area by the church is very well maintained, with almost no rubbish here, and it is a nice place to sit and have a moment of calm before heading back down through Garbage City. And fortunately you cannot smell the garbage smell when you are around the church! 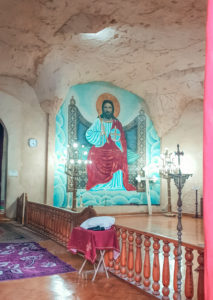 The Copts find it challenging to maintain their culture and customs and still face persecution because of their Coptic Orthodox beliefs. They are often marginalised by the state and there are often terrorist attacks on their churches. Despite this, a staggering 70,000 Christians visit this church every week.

I really recommend to type ‘Garbage dreams’ or ‘Zabbaleen: trash town’ into Youtube to watch fascinating documentaries made about Garbage City. My Egyptian friend had actually advised against going there, and didn’t understand why I wanted to visit it as even most Egyptians will turn their head when you so much as mention it. But I’m so glad I went, saw the life there and spoke with the local people. It was a humbling experience, and a side of the city that nobody cares to see, but I encourage you to go and discover this place for yourself. 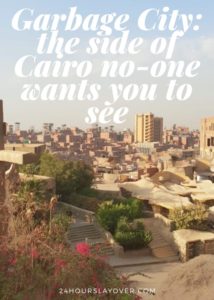