Siosepol Bridge is a stunning two-storey bridge and one of the most iconic tourist attractions in Isfahan, Iran. Also written as Si-o-se Pol or 33 Pol, it means “bridge of 33 arches” or more correctly “33 bridge” in the Farsi language as there are 33 arches across the lower level of the bridge.

Passengers walk along the upper level, who are protected from the wind (and from falling) by the high walls. Water flows along the lower level, although more often than not these days there is no water there so you can go onto the river bed and underneath the bridge. 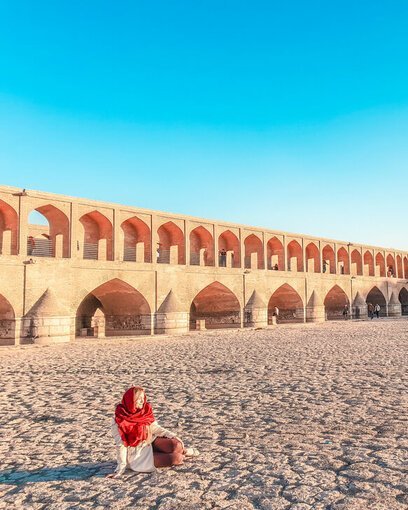 Why is there no water underneath Siosepol Bridge?

Sadly there is almost always no longer water flowing underneath the bridges of Isfahan nowadays. The once mighty Zayanderud River used to flow underneath the eleven bridges but since the last few years the river has been dry due to poor water management and a rainfall shortage. Due to Iran’s long-standing drought, water shortages mean that often the river bed is dry and there is no water flowing, as the Iranian Government diverts the water coming from the Zagros Mountains to other regions before it gets to Isfahan. Around the desert city of Esfahan, fields are now dirt, cattle are gone and farmers are unable to survive.

Seeing the river boats abandoned on the dried-up river bed is really sad, and seeing the river like this makes the locals sad. Sometimes when there has been rain in the winter, water will flow underneath the bridge again. The locals are cheering and happy, however it is short-lived and only lasts a few days.

Dust storms and dust blowing from the dry riverbed has led Isfahan to become one of the most polluted cities in the world with regards to air quality. You’ll see some locals covering their mouth with masks or scarfs to protect themselves. 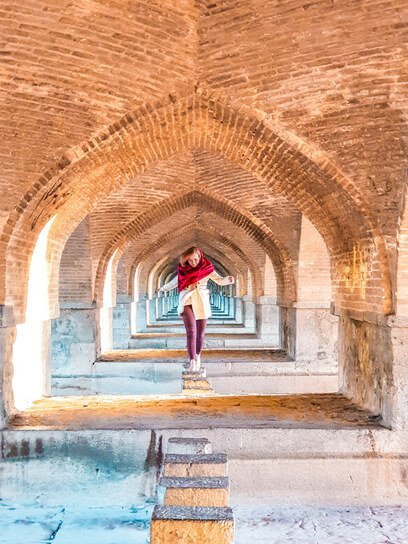 When is the best time to visit Siose Pol Bridge?

Definitely the evening is the best time to visit Siosepol Bridge! Both locals and foreigners come here once the sun has gone down to relax as it is a very popular local hangout place, especially on the lower level (where the water should be). You’ll hear the locals singing together and having fun, it’s a really nice atmosphere down there!

Similarly, nearby Khaju bridge (5 minute drive or 25 minute walk) is also stunning and a great place to hang out in the evening. Both Siosepol Bridge and Khaju Bridge (pictured below) are lit up beautifully at night, and the reflection is even more stunning when there is water under the bridge. They also both have little alcoves formed by the arches where people sit and chat. 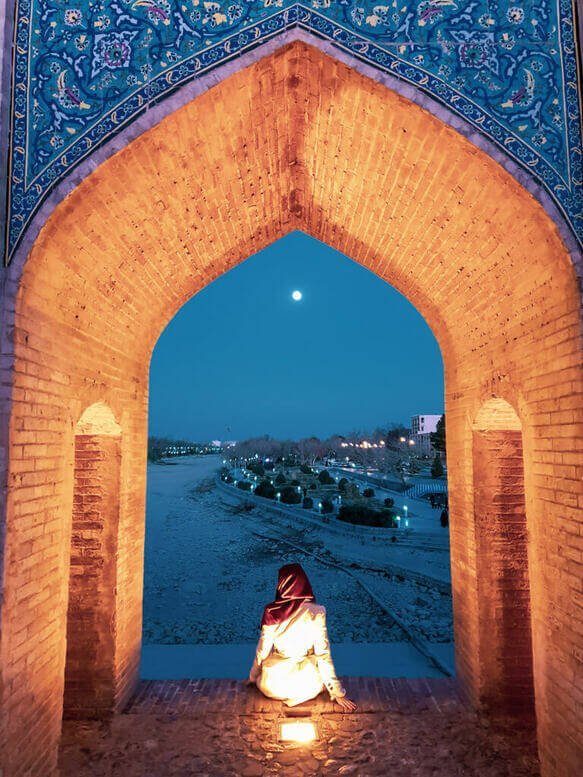 Eleven bridges span the Zayanderud River in Isfahan, with Siose pol Bridge being the most famous one due to it’s architecture and size. The impressive bridge is built of stone and spans almost 300 meters. It is almost 14 metres wide, with the widest arch spanning over 5 meters. The bridge is two-storey so there are two sets of arches: 33 arches on the lower level, and then on the upper level there are 2 arches for each lower level arch. It took 3 years to build and was completed in 1602 under the reign of Shah Abbas.

How to get to Siosepol Bridge?

Isfahan (also known as Esfahan), was once capital of Ancient Persia. It is often nicknamed “Isfahan nesfe-Jahan” , meaning “half of the world” in the Farsi language. This is because it was the finest city in all the land in it’s day. The city is still so impressive and was my absolute favourite in Iran, with such a fascinating history and really grand and intricately detailed Persian architecture. 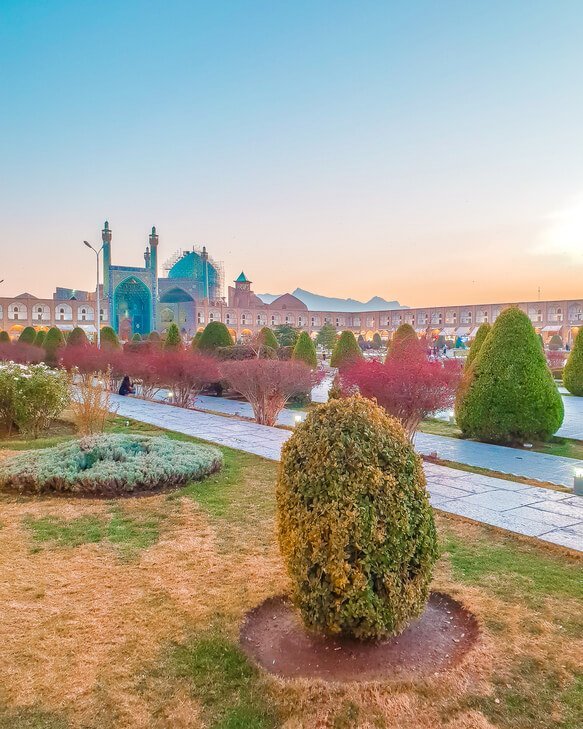 Other things to do in Isfahan:

Imam Square, also known as Naqsh-e Jahan Square, is a magnificently large and beautiful square in the centre of Isfahan. It was built in the early 1600’s by order of Shah Abbas the Great. Many significant points of interest are located here in Imam square: Imam Mosque, Sheikh Lotfollah Mosque and Ali Qapu Palace. 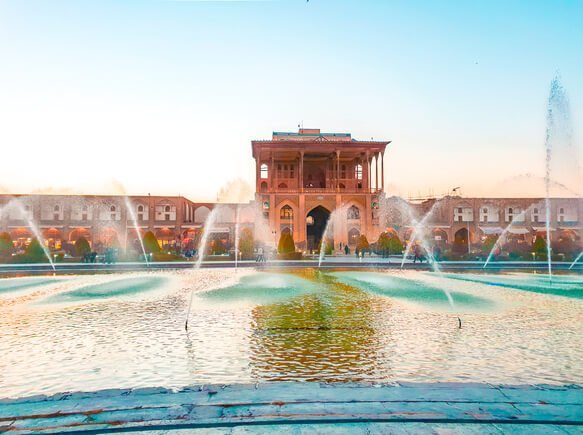 The Quysarieh Gate is also in Imam Square, which is the entrance to Isfahan’s Grand Bazaar. There is a lovely little cafe with an outdoor roof terrace above the gate where you can sit and have a bird’s eye view of the whole square. Make sure to stop by and have a tea here, it is so beautiful. 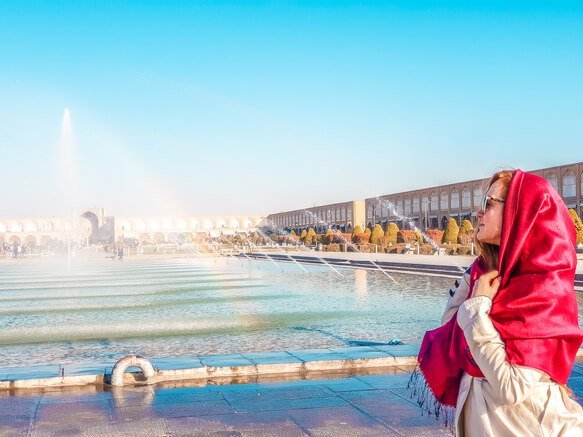 Visit the maze that is The Grand Bazaar of Isfahan. There are many fabric shops, jewellery shops, and of course the carpet shops in Imam Square just before you enter the bazaar. Check out my favourite Persian carpet shop: “Black Tent“. The carpets and kilims are of a really good quality here and are so beautiful.

Also known as the Ladies Mosque, Sheikh Lotfollah Mosque stands opposite Aliqapu Palace (the residence of Shah Abbas). The Shah and his family used Sheikh Lotfollah Mosque as a private mosque and it was guarded so the general public could not enter. Therefore in order to avoid being seen they would cross the square in an underground tunnel.

This mosque is another example of an Iranian masterpiece. Despite it being small it is incredibly beautiful and the details are incredible. Blue ceramics adorn the walls, and if you get there in the afternoon you’ll catch the sun beams coming through the window. 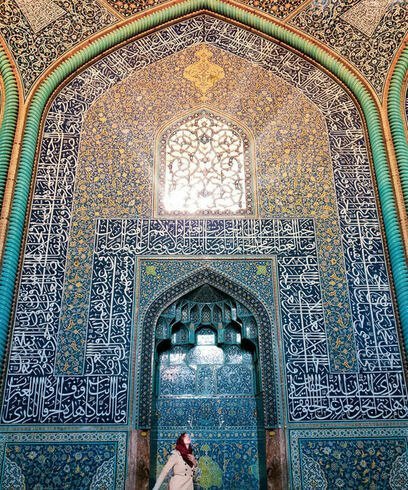 Also known as Shah Mosque, Imam mosque is absolutely breathtaking with it’s turquoise and blue ceramics. It is a masterpiece of Persian architecture from the Islamic era and is recognised as a UNESCO World Heritage Site. Both from the exterior and once you are inside, the detail here is incredible stunning. 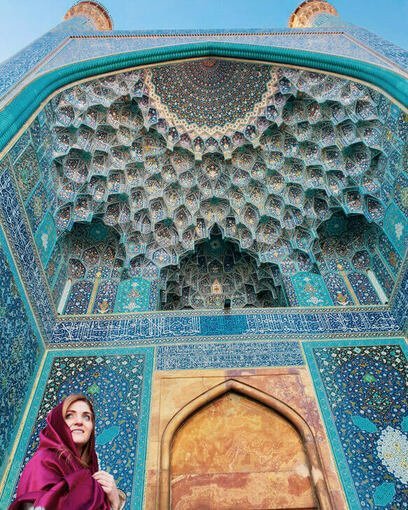 If you are looking to travel independently around Iran, check out my 10 days in Iran itinerary! Alternatively, check out these Tehran and Qeshm itineraries! 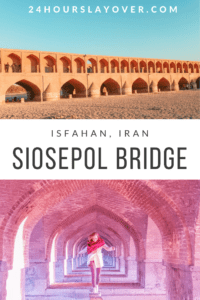