I am staying abroad right now. Despite everything that is going on around the world.

This was a very difficult decision for me to make. And I’m still not sure if it is the right one to do. 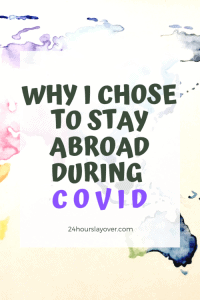 I packed up my life and moved abroad to Australia mid-October 2019. It was to be a year where I would travel slowly around Australia and work on my travel website, turning it into a full-time business. Fast forward 5 months however and the whole world is rapidly starting to close down. Thousands of people dying, airlines cancelling flights, people abroad scrambling to get back home, millions of people losing their jobs, and the travel industry going down the pan.

As for me, all my goals for my business I was so close to achieving flew straight out the window and my income slashed to zero. Not only that, but I was on the verge of becoming homeless as the accommodation I had sorted for the remainder of my time in Australia had been taken out of my hands in an instant. Due to the unfolding situation the owners now needed it back.

Do I stay abroad or do I go?

I needed to make a decision and I needed to make it fast as airlines were pulling out by the day. Do I stay in Australia or do I go home to England? My thoughts were so blurred. I had worked hard to be able to start my new life in Australia and I would feel like a failure going home so soon. Especially seeing as the situation in Australia seemed not so grim as in Europe and USA. But equally I was very worried for my retired parents and wanted to be with them. Things in the UK were getting bad.

I asked advice from friends: some would say stay in Australia, others would say leave. They just didn’t know what advice to give. They were understandably wrapped up in their own dramas unfolding that they weren’t really able to give me any sound, logical advice. I just didn’t know what to do. All I knew was that if I left Australia that would be it, I wouldn’t come back.

What if I come home and unknowingly infect my parents? What if in a couple of months everything will be okay? Yet what if it lasts for a year? Of course my parents wanted to see me but equally they felt sad for me. They felt it would be such a shame for me if I would come home so soon after I left. I just felt there was no right answer in this situation.

I decided to look at flights. If I could get a cheap one I would come home. I saw one leaving in a few days. I had a chat with my parents, even spoke to my old hospital in London about coming back to work to do my bit and help out as I knew they needed extra healthcare staff. So I booked the flight. But then a few hours later the flight got cancelled. I booked another flight. Again same thing happened. I then booked another flight – third time lucky I though. And yet again it cancelled. At that point I had no more energy. My emotions were all over the place. My life was literally in limbo.

Regardless I gave it one last shot and headed down to the British Consulate in Sydney. I saw about a hundred other Brits there, most with suitcases. All of them desperate to get back home to the UK. Most were elderly couples or people with children. It hit me that these were the people that needed to get home more than me. They had jobs to return to, mortgages to pay, pets to look after. I wasn’t here on holiday like them. My visa isn’t going to expire any time soon. I’m a big believer in fate and I just felt like 3 cancelled flights was a sign to stop trying. At least for the moment.

So I decided I would stay put abroad, away from my family on the other side of the world. Partly because trying to get home was causing me too much stress with the constant cancellations (I was on hold for 4 hours with each of the airlines trying to get a refund!). But more importantly I was terrified that I would pick something up on the long journey home. Even if I completely separated myself from my parents in our house there was still a possibility I could be unknowingly carrying something and pass it onto them somehow which would be devastating. This invisible killer is completely ruthless and I didn’t want to risk anybody’s life by trying to get home.

In times like this you see the goodness in people. People help those less fortunate. A friend offered me a place to stay in Sydney short-term for free. I felt extremely grateful. I get to see the ocean every day and try and make sense of my thoughts. Don’t get me wrong though: earning no income, not being able to get a job or any Government support and being apart from my family at this time is very challenging. When I turn on the UK news I burst into tears every day hearing the death rate continually soar and people having to die alone. When I FaceTime my parents I wonder when I will ever be able to give them a hug again.

I tell myself we must stay apart now, so that when we do get back together nobody is missing. That even though physically we are apart, emotionally we are all together. That by staying put on the other side of the world might seem like the unnatural thing to do, but actually by staying abroad in my apartment here and following the rules I am helping to save lives. And that’s what it comes down to at the end of the day.

For all my NHS family and friends that I cannot be with: THANK YOU. Thank you so much for risking your health every day to save others. Thank you for always being so selfless. Thankyou for working even when you are scared you will run out of vital equipment. Without you our country would crumble. We appreciate you every single day!

Other challenges I faced in Australia:

My time abroad in Australia has been anything but easy. From the bushfires to the horrendous floods at the start of the year to this. And don’t even get me started on the visa issues I had. 6 weeks into my time in Australia I was told by the Australian Authorities that I was now unlawfully staying in the country due to a horrendous mix-up that had happened with my visa here due to no fault of my own. Luckily that has all been sorted out now but boy did it cause me a tremendous amount of stress. It’s been a challenging few months to say the least, and there’s still a long way to go before things will be easier. But brighter days are on the horizon.

Pin it for later! 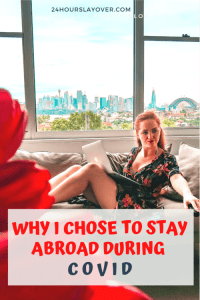 Fabulous SHARE here Young Lass! Your heart-felt words, mirror those of so many others I'm certain. You've got this! Your task now, is to continue to drop bread-crumbs about travel and living better... for the rest of us to follow! Get crack'in!

Thanks so much for the kind words Mark, glad you enjoyed the read! Catrina