My trip to Tbilisi was the reason I started my travel blog. Tbilisi is such a charming city that manages to steal the heart of almost everyone who has the pleasure to visit.

Whether it is because of the kind hearted and welcoming locals, the cute balconies along the buildings or the stunning landscapes constantly surrounding you, it’s hard not to fall in love with Tbilisi.

Despite tourism in Tbilisi growing every year, so many people aren’t even aware this stunning city exists! Discover more about Tbilisi here! 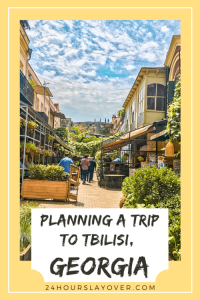 Tbilisi is the capital of Georgia, which lies on the edge of the Caucasus Mountains.

Due to it’s geographical location nestled between Turkey, Armenia, Azerbaijan and Russia, it lies at the intersection of Asia and Europe, with some people considering Georgia to be part of Europe whilst others consider it part of Asia.

Some mistakenly even think Georgia is in The Middle East as it lies east of Turkey, but this country definitely has a Eastern European vibe. 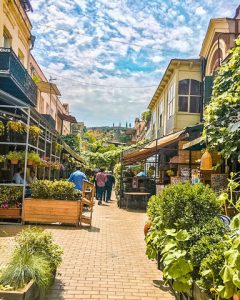 Tbilisi has a very interesting and complex history: it was once a stop on the Silk Road and became a confluence of civilisations.

In more recent history Georgia was once under Soviet rule and is now a former Soviet Republic.

Georgia has suffered from political and social unrest less than two decades ago and even though there is peace within Georgia, nowadays Georgia has a complex relationship with Russia. Infact there are still 2 Russian occupied areas of Georgia.

You will find a big Christianity presence here in Georgia with lots of churches and monasteries dotted around the country both in cities and on mountain tops.

The majority of Georgians are Eastern Orthodox. Religion is important to the people here and when entering a church many women will cover their hair as a sign of respect.

You will often see a box of headscarfs at the entrance of the church that you can borrow if you don’t have one and wish to go inside. 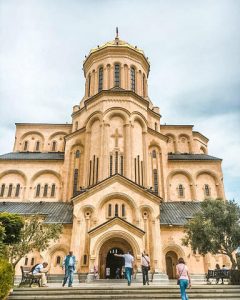 Winters can be cold and summers can be very hot (and busy!). Therefore spring and autumn are the perfect times to visit!

Alternatively use a Revolut card where you can convert currencies and avoid paying fees on transactions abroad.

Foreign withdrawals from ATMS are free too and you save a lot of money as the exchange rates are very favourable. Apply here. Pretty much all shops and restaurants in Georgia accept card.

Locals will probably look at you – this is totally normal for them and not rude, so just say hello and they will most likely do their best to start a conversation.

If you know Russian, you will be fine here as most Georgians speak fluent Russian due to Georgia previously being part of the USSR. 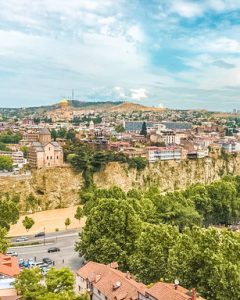 Whilst Tbilisi is the capital city, it retains more of a laid-back old-world town vibe. The city is very charming with very kind, welcoming, high-spirited and resilient locals who are always happy to help if you need anything.

The Old Town is very easy to explore on foot. Plus Tbilisi is very safe to visit, even for female solo travellers. It even reminded me a little bit of Belgrade, Serbia. 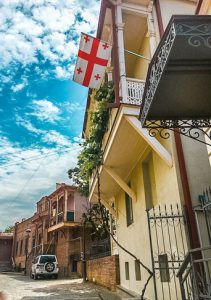 What to see in Tbilisi

Any trip to Tbilisi should start with visiting the Old Town. The architecture here is so pretty and very unique – you’ll find aspects of Persian and Russian architecture and even European architectural styles!

There are just so many Instagrammable places in Old Tbilisi. The maze-like narrow cobblestone lanes are lined with cute worn-out colourful buildings covered in beautifully intricate balconies. 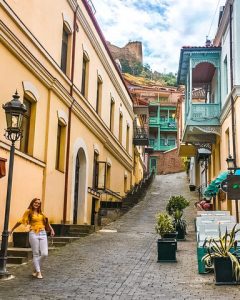 Wander amongst the historic neighbourhoods – the streets are quiet and you’ll see some of the buildings have fallen into disrepair but yet they still exuberant some quaint charm about them.

There are lots of landmarks in and around the Old Town, including the modern glass Bridge of Peace and the impressive Sioni Cathedral. Also make sure to check out the old baths – The Georgian Spa ‘Abanotubani’ which come from natural hot springs.

And head down Rustaveli Avenue which is the central avenue of the city lined with beautiful trees and beautiful architecture. 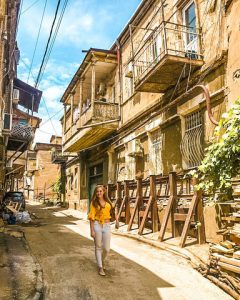 You can take the cablecar or walk up Sololaki Hill to Narikala Fortress. Walk around the remains of the beautiful 4th Century Narikala Fortress and enjoy panoramic views over the city from the top.

The Mother Georgia Statue is up here on Sololaki Hill too and looks over the city so make sure to see it too whilst you are up here.

The Mother of Georgia is a 20 metre tall aluminium figure clad in traditional Georgian dress and can be seen from everywhere in the city.

In one hand she is holding a bowl of wine and in the other a sword, representing both hospitality and freedom for the people of Georgia. 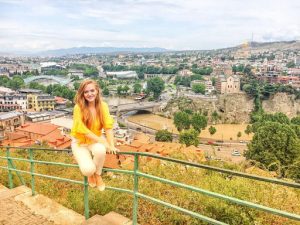 As both Tbilisi and Georgia are small it means day trips from the capital are very easy. Even if you are only in Tbilisi for a few days you can definitely get out and explore other places in the country.

If you have a week or so you can really explore a lot of Georgia, from the towns along The Black Sea to the snow-capped Caucasus Mountains and Kazbegi – a very accessible town in the Caucasus Mountains. There is really such a lot of variety in Georgia. 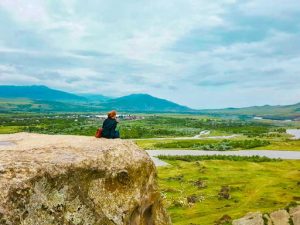 Mtskheta – this is the most popular day trip from Tbilisi as it is Georgia’s Holy City and located only 20km from Tbilisi.

Sighnaghi – one of Georgia’s most charming towns with spectacular architecture and amazing views over Alazani Valley.

David Gareji Monastery – a 2 hour drive from Tbilisi is this beautiful 6th Century monastery carved out of a cliff and is right next to the border of Azerbaijan. 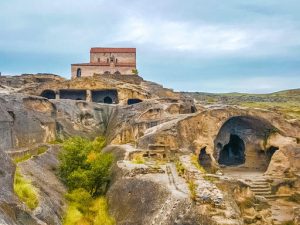 Georgian cuisine is very delicious and food here is very cheap compared to western prices! Therefore there is no excuse not to try as many traditional dishes as possible!

Georgia is big on meat dishes, but they also have lots of Mediterranean fusions and even have Georgian pizza! When you are here eat khinkali – the must try dish!

The cafe culture is quite big here too, and the downtown has quite a hipster vibe which extends into the trendy cafes.

And as for the wine. Well make sure you have some. I am serious. Georgian wine gives you no hangovers – I tried and tested this for you ;). 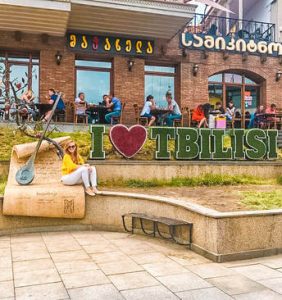 How to get to Tbilisi

From Tbilisi airport you can take bus number 37 to the city centre. It stops at Avlabari, Liberty Square, and Rustaveli before terminating at the Central Train Station.

They buses run all day and night and tickets cost 0.5 lari ($0.20). You need to pay for the fare in cash. The ride takes just under half an hour.

Alternatively you can download the app Yandex Taxi (post USSR countries’ equivalent to Uber) for reasonable fares. Yandex also needs to be paid in cash. A taxi from the airport to the centre should cost around 20 lari.

If you are coming from Kutaisi Airport bear in mind the ride takes about 4 hours! Take the Georgian Bus company from Kutaisi to Tbilisi city centre. Click here to visit their website and scheduled bus departures.

Usually the bus departures match up well with flight arrivals and departures. Tickets cost 20 lari and you can buy them online or at the airport. 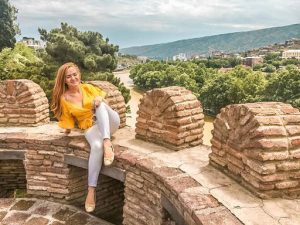 Sadly I didn’t take as many pictures in Tbilisi as I usually take. That’s because I stupidly made the mistake of going there with a guy!

We did plenty sightseeing but he got annoyed if I stopped to take pictures, so I soon stopped, much to my disappointment later. A few days later the whole thing fizzled out and I felt so annoyed I didn’t just take the pictures anyway!

I decided there and then that would be the last time I would let a guy ruin anything for me or put me off doing something.

I had been putting off creating a travel blog for a while, and the end of that ‘relationship’ and missed photo opportunities in Tbilisi was enough for me to create one. So girls, never make that mistake.

If you want to take the picture take the darn picture. The picture will be there forever, now how many guys can we say that about! Peace!

So despite being in Tbilisi with bad company, I really loved this city and would love to come back again! There is something special about this city and it’s charm.

Of course it cannot be compared to much bigger Western European cities, but it’s compact size is part of it’s charm. If this is the first Eastern European/Caucasus city you will be visiting it is important to go there with an open mind.

Don’t expect anything otherwise you may find it underwhelming. When you come with no expectations  you’re bound to fall in love with the charm here! 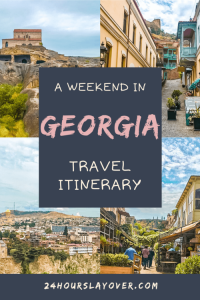 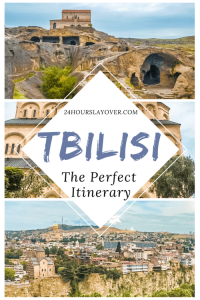 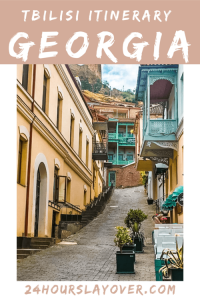