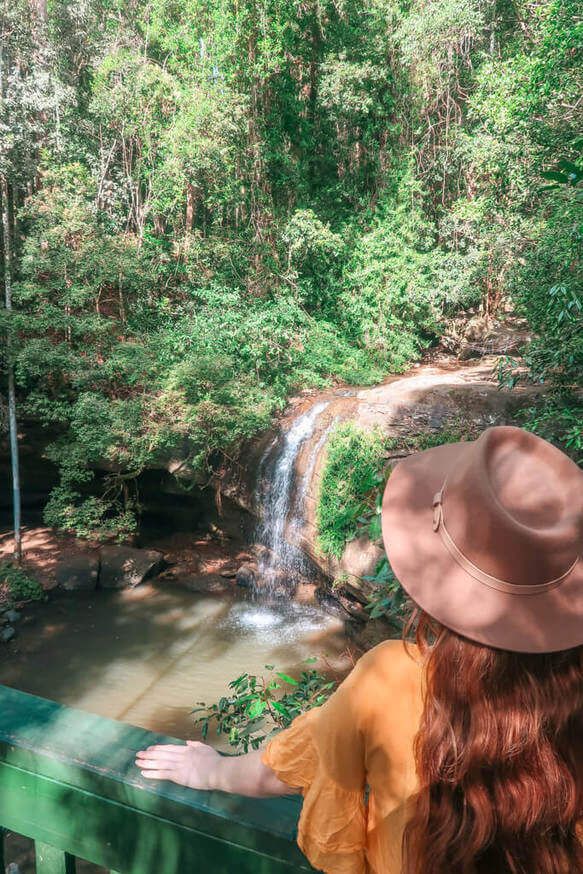 Check out these waterfall quotes & captions!

Where is Buderim Falls?

Buderim Falls, also known as Serenity Falls, is a hidden gem located about 15 minutes inland from the beaches of The Sunshine Coast, Queensland Australia.

The waterfall is located in the middle of Buderim Forest – a giant secluded sub-tropical rainforest oasis situated near Buderim Village. 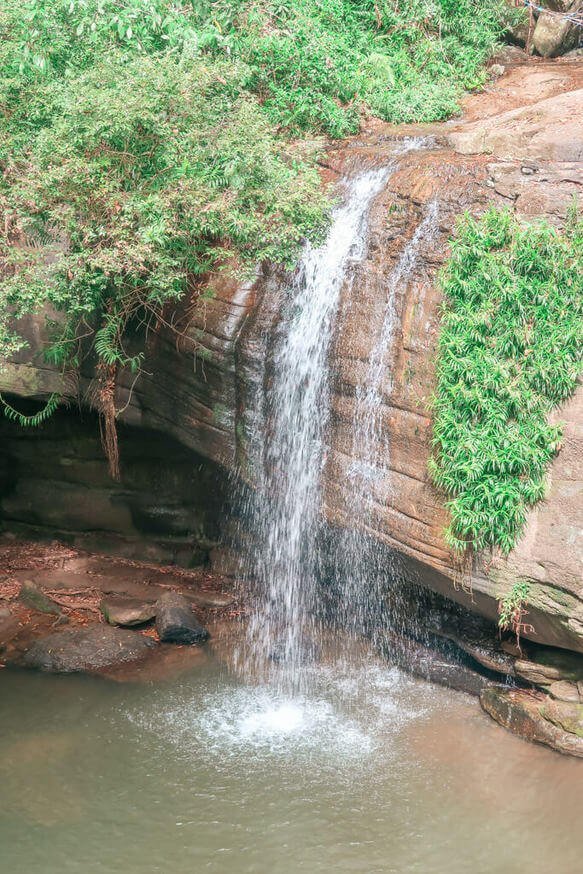 What to do at Buderim Falls

Go onto the arched Serenity Bridge to get a nice areal view of the falls. Alternatively head down the steps to the falls, where you can get in the natural pool underneath the waterfall. The waterfall isn’t massively powerful, but it is still beautiful and peaceful here.

Whilst many advise not to go in the falls, it looked pretty safe to me and I saw several people get in the water during the hour or so I was there. The water levels came roughly up to their waist and the pool was fairly small with no current.

To reach the top of the falls, if you are on the bridge facing the falls, walk right along the bridge then turn left and you’ll be able to get onto the falls from there. There is a hammock up there too that someone has put up for people to sit on.

A lot of the smaller waterfalls below have partly dried out so you can walk down these too if you wish (this is the route from Harry’s Lane) if you came from Quorn Close. You’ll see some small rock pools and cascades.

How to reach Buderim Falls

You can access Buderim Waterfall from two different entry points: Harry’s Lane (off Lindsay Road) and Quorn Close (click to see the locations on Google maps). Both take you on a bush walk through the forest to reach the falls.

Quorn Close however, is much nearer to the falls and has more parking spaces available.

Both locations have picnic tables and free barbecue facilities for you to enjoy before or after your walk to the waterfall. Just please remember to tidy up after yourselves. Toilets are also available in both car parks. 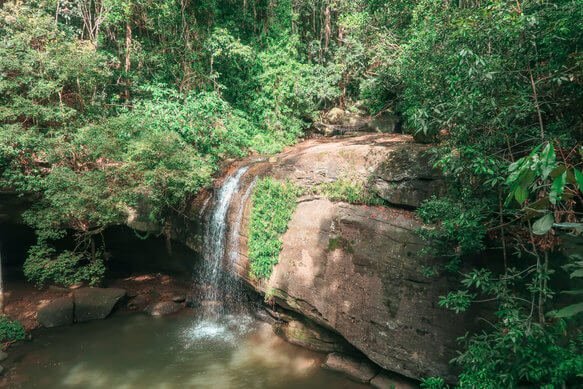 This path goes directly down to the top of the waterfall. The path is well paved at the start. It is quite steep but very manageable. The walk is very pleasant, amongst lots of tall trees.

The path soon turns into a dirt path but it is still well marked. The path veers off to the right and then you’ll come to a little junction – you can go either way although going left is quicker and easier. 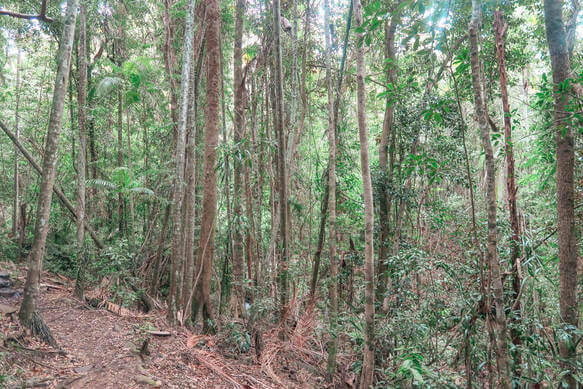 How the bush path looks

You can get some really nice pictures from the bridge looking down onto the waterfall. From there you can then go down the stairs to reach the bottom of the falls.

There is plenty space to park cars in the parking area here at Quorn Close. Parking is free, and in the middle of the car park is the peaceful Edna Wallings Memorial Garden. Edna Wallings was a famous gardener who retired in Buderim.

Again, park your car in the free car park and walk along the wooden boardwalk for about half a kilometre through the forest and across the creek. The boardwalk then ends and you’ll have to take an upwards fairly rugged bush trail to continue to the falls.

You’ll walk past several small cascades and climb over some rocks until you eventually reach Buderim Waterfall.

Click here to view the location of Buderim waterfall on Google Maps. 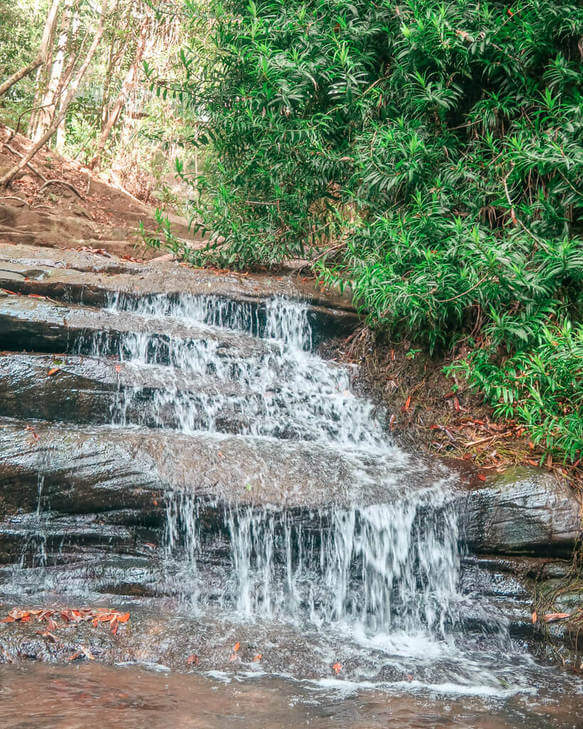 What to wear at Buderim Falls

Make sure you have adequate footwear when walking down  – especially if it has rained as it can get slippy and muddy.

Bring swimwear and a towel if you want to get in the water. The falls aren’t deep and you’ll be able to touch the bottom.

When to visit Buderim Falls?

Buderim Falls are great at any time of the year to visit. However, they look particularly beautiful after it has rained as there is more water flowing.

During the week the falls never get too busy and you can often be there alone. I stayed for about an hour, in that time several people came and went and I had it to myself for a few moments.

The falls are open all the time and are free to visit. 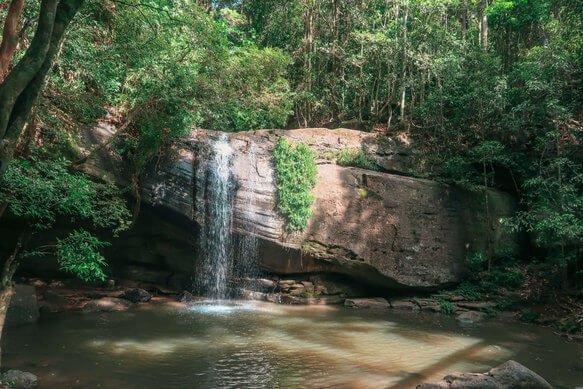 Things to bear in mind when visiting Buderim Falls:

Buderim Mountain is home to Buderim Village and Buderim Forest, which is located less than a mile apart. You can witness some spectacular views out to The Sunshine Coast from the top of Buderim Mountain.

Buderim is situated in a great location making it a popular choice to make as a day trip. It is in close proximity to many beaches along The Sunshine Coast, such as Mooloolaba, which is a 20 minute drive away, or world-renowned Noosa – a 45 minute drive away. Alternatively, in just over an hour you can be in Brisbane, the capital of Queensland state.

Other nearby places to explore include The Glasshouse Mountains, Australia Zoo and the quaint town of Maleny.

The East Coast of Australia is full of beautiful scenery, from stunning waterfalls to beaches and hikes. If you’re set on doing an East Coast road trip, check out these other travel guides to help you plan your trip!

Nimbin: Things To Do In Nimbin

Yamba: What To Do In Yamba

Seal Rocks: Top Things To Do At Seal Rocks

Great Lakes: Cellitos Beach – one of the most beautiful beaches in NSW!

Southern Illawarra: 14 Best Things To Do In Kiama! 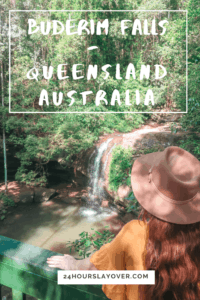