The Cronulla Coastal Walk (also known as the Cronulla Beach Walk) is a stunning walk you can do on a day trip from Sydney. A trip down to Cronulla to do the Beach Walk is really popular with those who want to escape the busy beaches and coastal paths closer to Sydney, such as the Bondi to Coogee or Spit to Manly walks.

Cronulla is an amazing and lively suburb located 30km south of Sydney in Sutherland Shire (known as ‘The Shire’ to locals). It has everything – beaches, coastal paths, nightlife, plenty places to eat – plus all the beaches in Cronulla have great surf and are really popular with surfers.

How to get to Cronulla

If coming from central Sydney it will take you around 1 hour to get to Cronulla so it makes for the perfect day trip from Sydney.

Public Transport:
You can get the train from Bondi Junction or Central straight through to Cronulla. You take the T4 line (Eastern Suburbs & Illawarra line). Opal cards are accepted.

Make sure the final destination is Cronulla and you don’t accidentally get on the train that goes to Waterfall or Helensburgh instead. The train line splits part way along the route, so the Waterfall train will not stop at Cronulla and vice versa.

Cronulla Train Station is located right next to the main strip of shops and cafes and is just a few hundred metres from Cronulla Beach.

Car:
If coming by car from central Sydney the journey time should also take around an hour. You’ll find plenty parking on the side streets in Cronulla. 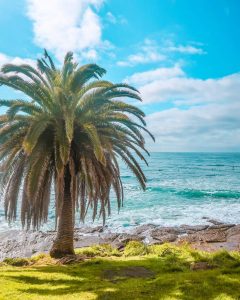 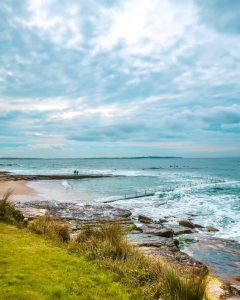 Cronulla Beach Walk starts along Wanda Beach which then turns into Elouera Beach and subsequently North Cronulla Beach all within a kilometre. Wanda is an Aboriginal word meaning ‘sand hills’ or ‘beach’. The beach is beautiful and is patrolled in the warmer months from November to April.

Wanda Beach faces out onto the Pacific Ocean so the waves here can often be quite rough. If you plan to take a swim, watch out for rips and make sure you always swim between the flags. Due to the waves Wanda Beach is a popular surfing spot.

You’ll find toilets and showers here at Wanda Beach, plus in the summer months the cafe on the beach is open too.

North Cronulla Beach is also a popular beach and like Wanda Beach it is patrolled by lifeguards from November to April. There are public toilets and showers here, as well as a playground in adjacent Dunningham Park and several cafes and restaurants nearby if you want to have some food or drinks before continuing the walk. 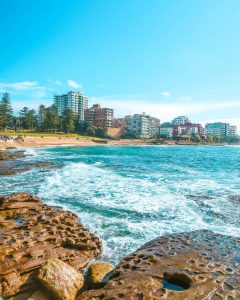 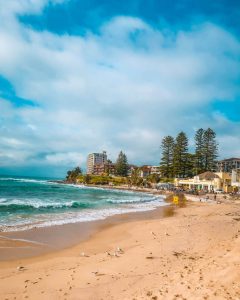 Blackwoods Beach is a small and secluded beach that looks out on to Shark Island. It is not so busy as there are no rock pools here and you need to climb down to get onto the beach. 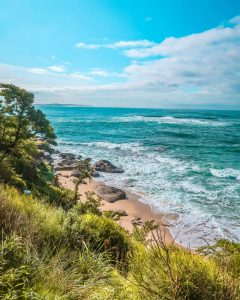 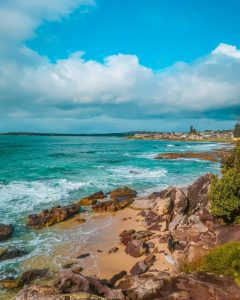 The walkway then takes you down to Shelly Beach. Shelly Beach isn’t a sandy beach – it is quite rocky. However it does have the most epic rock pool! The waves come crashing up against the sides and it is a really decent size for doing laps. The views from here across the Kurnell peninsula were stunning – this is definitely my favourite rock pool along the Cronulla Coastal Walk! 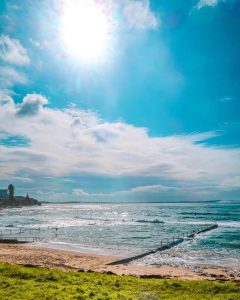 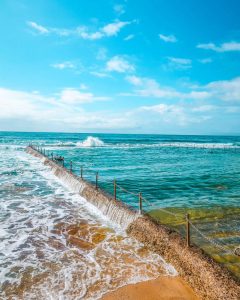 There are BBQ facilities here by Shelly Beach and a nice open grassy area perfect for enjoying the sun or a nice picnic. There is also a playground and a cafe here as well as toilets and showers. Note dogs aren’t allowed on the beach here.

Follow the coastal walkway around a bit further and you’ll come to Oak Park Beach. Oak Park Beach is also the location of another rock pool, as well as BBQ facilities, picnic benches, toilets, a playground and a large grassy area overlooking the beach. The rock pool has a sandy end by the beach, then it gets rocky as it gets deeper. Oak Park Beach is another popular spot for surfers. The beach is unpatrolled so do take care here if you are swimming as the waves can be rough. 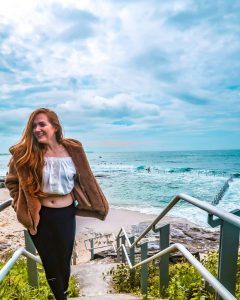 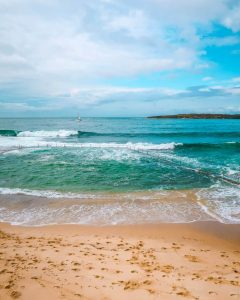 At the bottom of the peninsula is Bass & Flinders Point: where the Hacking River meets the Tasman Sea. From here there are stunning views across to Bundeena and Royal National Park. You’ll see a large memorial to Matthew Flinders and George Bass, the two explorers who the spot was named after.

You can continue going round the peninsula towards Salmon Haul Reserve – there are some more picnic spots, toilets and a playground here.  The walk technically finishes here, so from here you can either walk back the same way you came, or continue going round and wind your way back towards Cronulla via Darook Park.

There is no public transport from here back up to Cronulla town centre so you will need to walk back at least part of the way, whether you are heading back to your car or heading back to the train station. You can also call an Uber or Ola to take you back to where you need to go if you just can’t walk any more. Just call it on to one of the nearby streets. 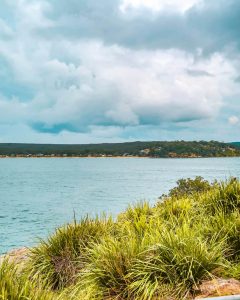 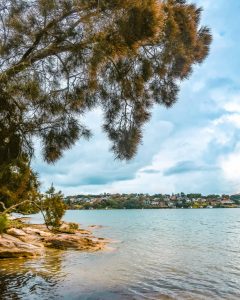 If you continue to follow the path round the peninsula as opposed to going back on yourself you’ll soon find yourself in Darook Park. You’ll find toilets here as well as a little rope swing the goes over the water.

Toilets along the Cronulla Beach Walk:

You’ll also find many spots where you can refill your water bottle along the route so make sure you pack a refillable water bottle for your walk!

What to bring on the Cronulla Beach Walk:

Where to get food on the Cronulla Coastal Walk:

You can either eat before, during or after the walk as you’ll be coming back this way anyway after the walk to get back to the train station or your car. Cronulla has lots of bars too so it is a good place to spend a Saturday evening. Northies in particular is very popular and is great if you want to have a few drinks, a good atmosphere and good music.

Are dogs allowed on the Cronulla Coastal Walk?

If you want to take your dog onto the beach, you’ll need to head up to Greenhills Beach (just north of Wanda Beach) which is an off leash dog beach. Alternatively Silver Beach in Kurnell (a 20 minute drive north) is an off leash dog beach. My guide on Dog Friendly Beaches in Sydney explains exactly which part of these beaches dogs are allowed off-leash, as well as everything you need to know to bring your dog here.

If you are spending a whole day in the Cronulla area and are looking for an alternative walk, why not stroll from Kurnell Beach all the way around Cape Solander to the top of Cronulla Beach? It’s a long walk but there are lots of interesting things to see such as the landing place of Captain Cook and Cape Solander – one of the best spots in Sydney for whale watching! 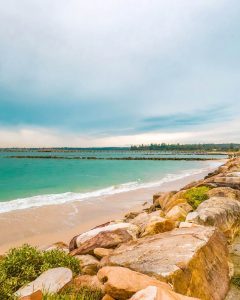 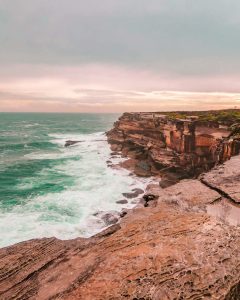 How to get to Kurnell

Take the 987 bus from outside Cronulla Train Station (on the opposite side of the road, just in front of Monro Park). Buses run every hour so check the timetable! The journey takes about 20 minutes and drops you off on Prince Charles Parade which is where Kurnell Beach is located.

Kurnell Beach is 2km long but it isn’t as stunning as Cronulla Beach as the view faces out towards Port Botany. On a clear day though you will be able to see the Sydney skyline in the distance. There is an off leash dog area here at Kurnell Beach – at the western end between the third and forth jetties.

If you stroll all the way along Kurnell Beach you’ll reach Kamay Botany Bay National Park. Remember as this is a National Park no dogs are allowed here.

Kurnell is where Captain Cook’s Landing Place is. Captain James Cook was a British navigator and the first recorded explorer to land on the east coast of Australia in 1770. Near the entrance of Kamay Botany Bay National Park you’ll see the Heritage Listed Site where Captain Cook landed 250 years ago. There is a plaque, an information placard and also an artistic boat sculpture to mark the location. The crew on his boat the Endeavor made contact with the Aboriginal people here, so note that this area can sometimes be the location for Aboriginal protests as the arrival of Captain Cook marked the dissemination of the Aboriginal people. 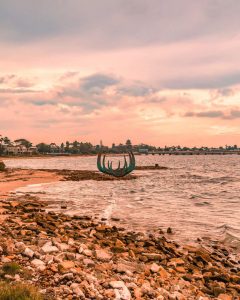 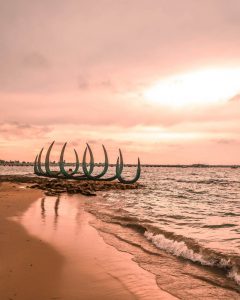 A little further along you’ll see the whale statue to commemorate the popular whale watching spot. You can see across to the skyline of Sydney on a clear day, as well as La Perouse and Cape Banks.

Cape Solander is one of the best places in Sydney for whale watching. The whale watching season goes from June to November, with mid June to mid July often being the best time to spot these majestic creatures as they migrate up to warmer waters. You may want to consider bringing some binoculars and a fold up chair as sometimes it can be a while before you spot any. Note if you come on a rainy or particularly cloudy day it will be a lot trickier to spot any whales, but there is shelter here if it rains though.

There is usually a mobile cafe here where you can grab a coffee and some cake. There are a couple of benches where you can sit and look out for whales, but if often gets busy here so you may want to walk along the rock platforms and sit down on the rocks if you want to get away from the crowds.

From Cape Solander you can walk all the way to Cronulla Beach along the Cape Baily Track.

Along the Cape Baily Track there are lots of rock platforms you can walk along. Be careful to not go near the edge as you are at the top of some very big cliffs. The great thing about this walk is that you nearly always walking alongside the ocean so you can still do some whale watching as you are walking. Sometimes finding the path can be a little tricky, so for this reason I always make sure I have the app maps.me handy just to make sure I am on the correct track. 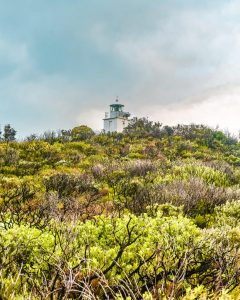 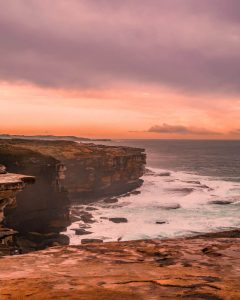 Also be careful if it has rained lately! It had rained heavily a few days before, and one part of the track had literally turned into a giant river when I was there! I had to hold on to the tree branches on either side of the path to ensure I didn’t fall in!

The path also goes through some bushland before going past Cape Baily lighthouse and there are lots of interesting stone formations along the way in the cliffs.

If you choose to walk all the way from Kurnell Beach down to Cronulla Beach and then do the Cronulla Coastal Walk it is easily 20km so make sure you bring adequate walking shoes or trainers!

If you are looking for more Sydney Coastal Walks, you will find all the best ones here!