Lady Robinsons Beach is a lovely long beach away from the touristic spots in Sydney. So long in fact – at over 5km it is Sydney’s longest beach! There is a lovely promenade running along the length of the beach that makes it perfect for doing an afternoon walk. Plus the water is always calm here so it makes for a wonderful place to swim! As this isn’t one of Sydney’s most famous beaches it’s never too crowded here which is great when you want to escape the crowds! Read on for all you need to know about Lady Robinsons Beach!

Where is Lady Robinsons Beach?

Lady Robinsons Beach lies roughly 16km south of Sydney CBD. It covers the long strip of sand from the mouth of the Cooks River just west of Sydney Airport down to the mouth of Georges River. It spans several suburbs, starting with Kyeemah in the north, then Brighton Le Sands, Monterey, Ramsgate, Dolls Point and Sandringham before finishing in the south at Sans Souci. It lies on the western side of Botany Bay and takes up most of the western foreshore in the bay. Lady Robinsons Beach is highlighted on the Google maps image below. 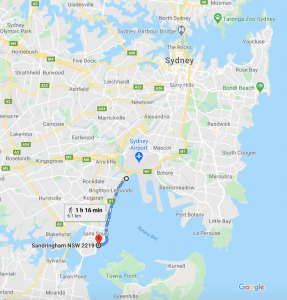 It was originally known as Seven Mile Beach before being renamed Lady Robinsons Beach after the wife of the then Governor. Whilst the whole length of the beach is known as Lady Robinsons Beach, as there are several surrounding suburbs (Kyeemagh, Brighton-Le-Sands, Monterey, Ramsgate, Dolls Point and Sandringham), the beach often gets split up and named after each suburb. 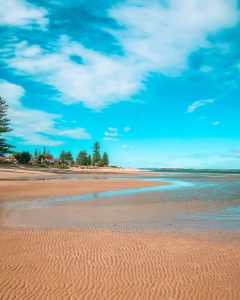 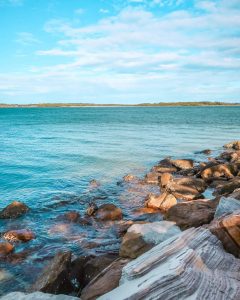 What is there to do at Lady Robinsons Beach?

There is so much to keep you occupied here for several hours! Options include: 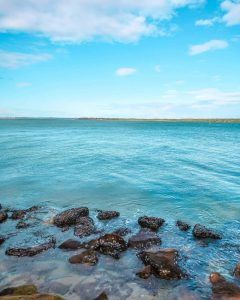 How to get to Lady Robinsons Beach

Public transport:
Take a train from Central to Redfern Station (or 320 bus from Wynyard). Then take the bus number 303 from Redfern Station (it goes via Mascot). When the bus gets to Brighton Le Sands it runs south all the way along The Grand Parade to Dolls Point. The Grand Parade is the main road that runs just behind the beach from the top to the bottom and can be easily accessed from any point of Lady Robinsons Beach.

You can get off the bus at any point you wish, however if you want to walk the length of the beach stay on the bus almost until the end – where it turns away from the beach at Riverside Drive. From there you can walk all the way up along the beach as far as you wish. I suggest you start at the bottom of the beach and work your way up (as opposed to starting at the top at Kyeemagh or Brighton Le Sands and working your way down) as the views are more varied and more beautiful the further south you go. Here in the south they look out across to the deserted Towra Beach – a long and beautiful stretch of sand. Once you get past Sandringham the view is mostly of the cranes at Port Botany which are certainly not as picturesque.

Note that the bus 303 is the only bus route along this road that goes north (in the direction of the city). It runs only once an hour and doesn’t run that late (until around 7pm/8pm) so make sure to check the bus timetable so you know what time the buses are!

Car:
You’ll find lots of parking ares around the beach and The Grand Parade.

Start the walk along the thin strip of sand adjacent to Riverside Drive and enjoy the stunning views. You’ll see the Captain Cook Bridge to your right and Caringbah in the distance, as well as the beautiful Pelican Point and Carters Island on the Kurnell Peninsula in front of you. To the left of these is the pristine Towra Beach which surrounds a wildlife reserve. Here there is a mixture of sand flats, protected wetlands and seagrass. For over a kilometre it is just sand, and then it joins some mangroves. You will definitely see more birds here than people as it can only be accessed by boat. It looked so exotic in the distance and definitely made me want to visit this remote place! You can see it in the distance in the pictures below. 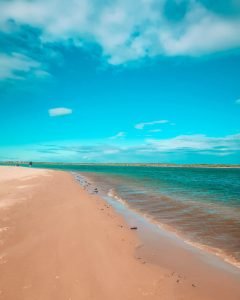 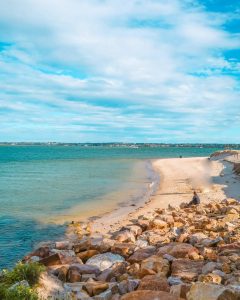 You’ll start to see the big red and yellow cranes of Port Botany. The houses along the waterfront were spectacular though and I couldn’t stop looking at them so I didn’t even notice the port! I found these

Walking along here you’ll come to the Sandringham Baths – also known as Vanston Baths. None of the ocean pools here are rock pools like you’ll find on the coastal walks along the Northern Beaches and Eastern Suburbs of Sydney – all the ocean pools are purely enclosures surrounded by shark nets. Whilst they may not be as picturesque as the likes of Bronte Baths, due to the calm waters they make for a fantastic place to swim and relax. The water is very calm all the way along Lady Robinsons Beach because it is relatively sheltered body of water: the opening to the bay from the ocean is just over 1km.

One thing to note is to be careful of stingrays in these pools – they are often camouflaged on the sand so just shuffle your feet in the water when you are walking in.

Sandringham Beach then curves around just before you get to the George’s River 16ft Sailing Club. There is a nice place for coffee right next to the sailing club with outdoor seating overlooking the beach. It is the perfect place to stop for a coffee and a snack! 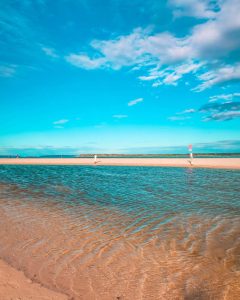 Here you don’t see the port as the beach is facing south. There is a beautiful sand bar here if you are here during low tide! It was so picturesque and it really had a Mediterranean vibe! 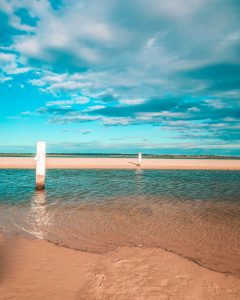 Follow the beach round and you’ll be on Dolls Point Beach. The views across to Towra Beach from here are perfect, and you’ll start to see some planes landing as you are near the flight path (the planes fly over nearby Cronulla towards the airport). You can see the planes but you can’t hear them from here so the beach is still very peaceful. Make sure you enjoy the views here as from here-on after all the beaches will have views of the cranes in the port!

There is a public toilet in the grassy area behind Dolls Point Beach if you need it. 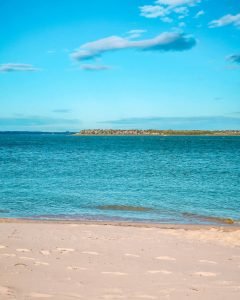 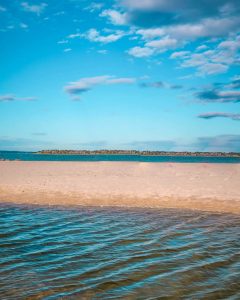 The beach continues for a while longer before it turns into Ramsgate Beach. From here you can see the Sydney skyline on a clear day. 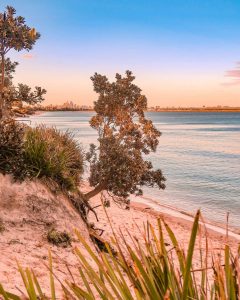 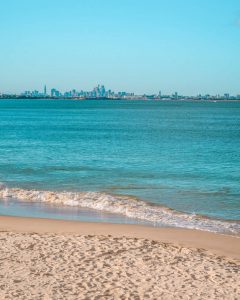 The large grass area “Cook Park” is behind the beach and here you will find a playground, barbecue facilities, benches and plenty shaded areas. There is a Coles supermarket just across the way on the other side of the road if you want to buy things for a picnic or a quick snack. Alternatively head to the restaurant Omeros on the beach for a lovely sit down lunch with a view overlooking the Ramsgate Baths.

Toilets, showers and a water fountain are also right in front of Ramsgate Baths if you need them. 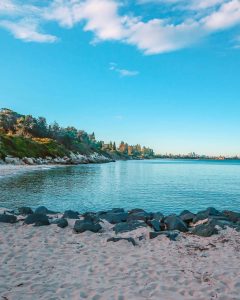 The next beach along is Monterey Beach – this is a great place to watch planes taking off and landing. There are some places where the beach as become so narrow that it is advised to walk along the promenade instead. It is however very easy to get from the beach onto the footpath, and along the whole walk there are lots of paths that connect the two. If you will be coming with a stroller or wheelchair you’ll still be able to enjoy the view as you can see the beach very easily from the promenade. 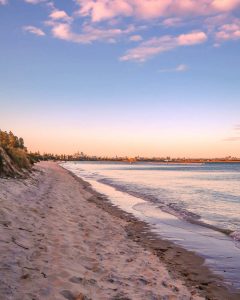 Brighton Le Sands is the most well known suburb out of all the ones that line Lady Robinsons Beach. There are some really nice cafes and restaurants along the beach, for example the shisha bar ‘republiq’ that lies directly in front of Brighton Baths, as well as Le Sands restaurant ND Brighton kiosk that are both next to republiq. All of them offer lots of tables outside for you to enjoy the view. There are also lots of choices for cafes and restaurants along Bay Street and The Grand Parade. 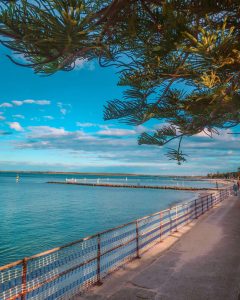 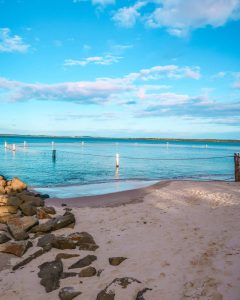 Here at Brighton you’ll also see the First Landing monument. This area would have been one of the first places Captain James Cook would have seen as he sailed through Botany Bay in 1770 and made his first landing in Australia. 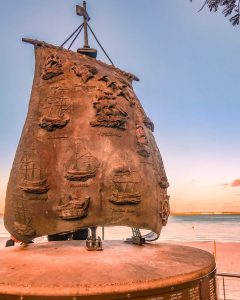 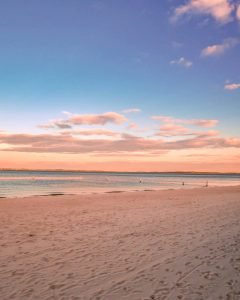 You can either take the bus back from Brighton, or continue on the last part of the walk to Kyeemagh Beach (there is a swimming area here as well as an off leash dog area), right next to the mouth of the Cooks River.

You’ll need to make your way onto the road, turn right and cross over Endeavor Bridge to make your way to the final stop: “The Beach” which is great for plane spotting as it is right next to one of the runways so the airplanes appear so close!