Despite this, Fingal Head Causeway is relatively unknown, which of course is good as there aren’t crowds of people! Here’s all you need to know about visiting Fingal Head and The Giants Causeway in Australia! 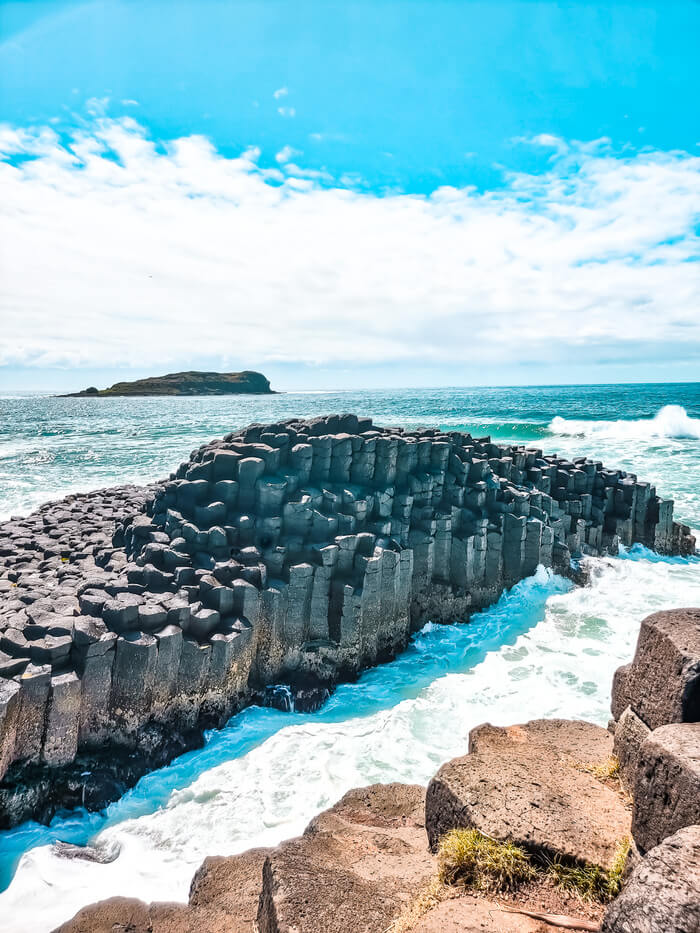 Where Is The Giants Causeway In Australia?

The Giants Causeway in Australia – more commonly known as Fingal Head Causeway, is located on Australia’s East Coast in Fingal Head. Fingal Head lies on the Tweed Coast of Northern NSW, near to the Queensland border. 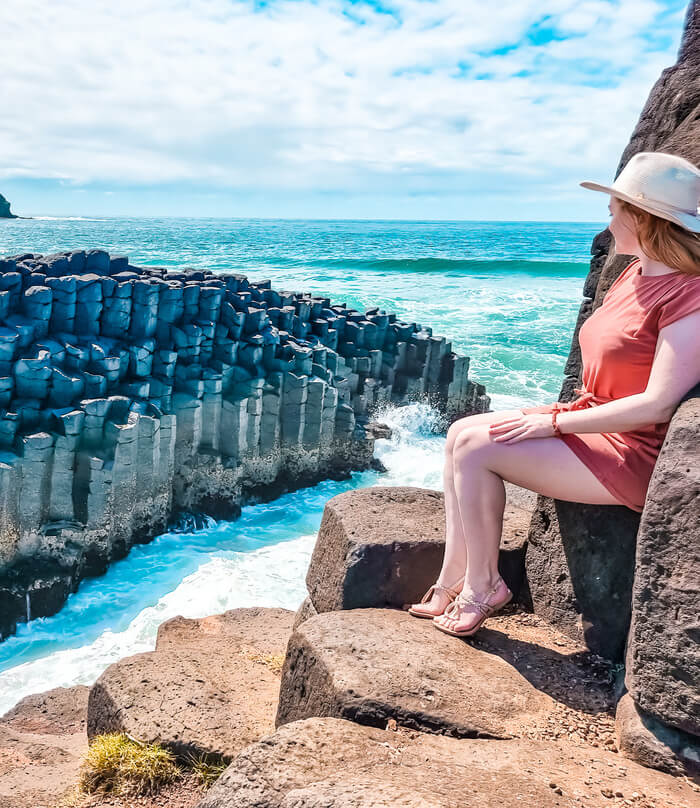 Why Is There A Giants Causeway In Australia?

Many people believe The Giants Causeway in Northern Ireland to be the only one of it’s kind in the world, but the truth is that you can find a very similar one in Australia!

They were both formed by cooling volcanic rock, and whilst The Giants Causeway in Australia is smaller than the one in Northern Ireland, it receives considerably less visitors so is much more pleasant to visit. 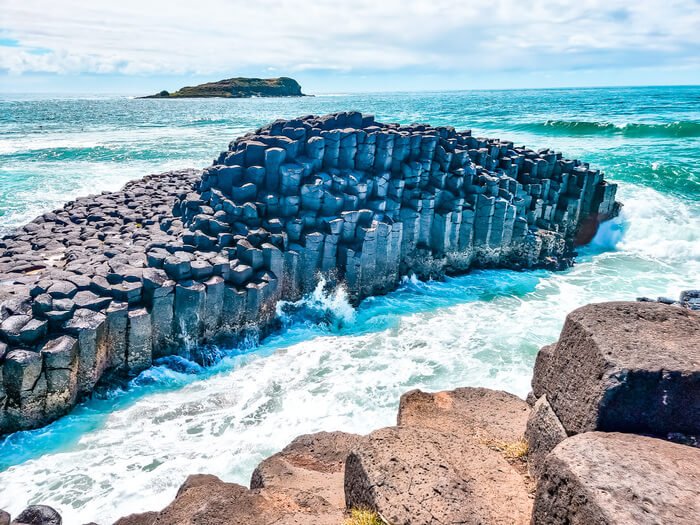 How Old Is Fingal Head & Why Are The Columns Hexagonal?

The headland of Fingal Head was formed as a result of prehistoric volcanic lava that flowed towards the sea from the extinct Volcano Mount Warning 23 million years ago. When the volcanic lava reached the water it cooled and created these hexagonal basalt rock columns that are still visible today.

The unique shape is caused because of contraction. As the lava cooled from the outside first and then into the centre, cracks developed – therefore forming hexagonal patterns. The lava cools from top to bottom when the lava flow is horizontal, hence the columns being vertical.

The volcanic lava basalt columns continue underwater all the way to Cook Island! 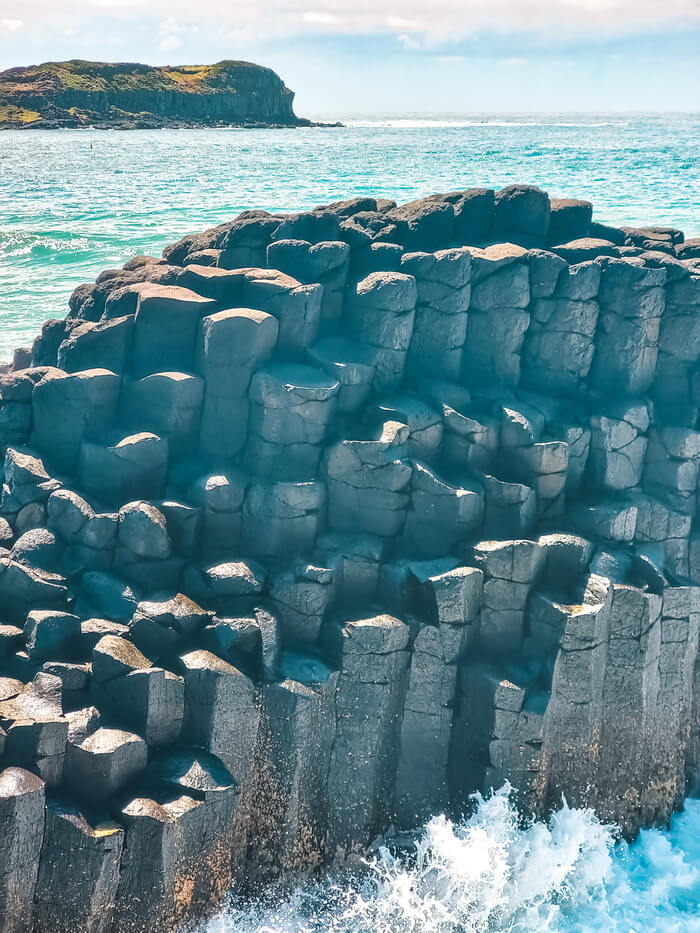 Why Is It Called Fingal Head Causeway?

Fingal Head is named after the fabled Irish giant Finn McCool (Fionn Mac Cumhaill in Gaelic), known as Fingal in Scotland. The Giants Causeway in Northern Ireland and the Fingal Caves in Scotland are also named after this mythical giant as it is believed in folklore that he created both of them.

As legend goes, the Irish giant Finn MacCool created The Giants Causeway in Northern Ireland so he could get across to Scotland to fight against his enemy.

The name Fingal derives from the medieval Viking settlement north of Dublin known as Fine Gall (“land of foreigners”).

Fingal Head is also a special place to the local Indigenous Goodjingburra people – the traditional custodians of the land. They call it ‘Booninybah’, meaning ‘home of the Giant Echidna’. As the columns of Fingal Head resemble the spines of an echidna (Australian native animal that looks like a hedgehog or porcupine), the Goodjingburra people believe the spirit of an ancient giant echidna inhabits the headland and wanders the land. 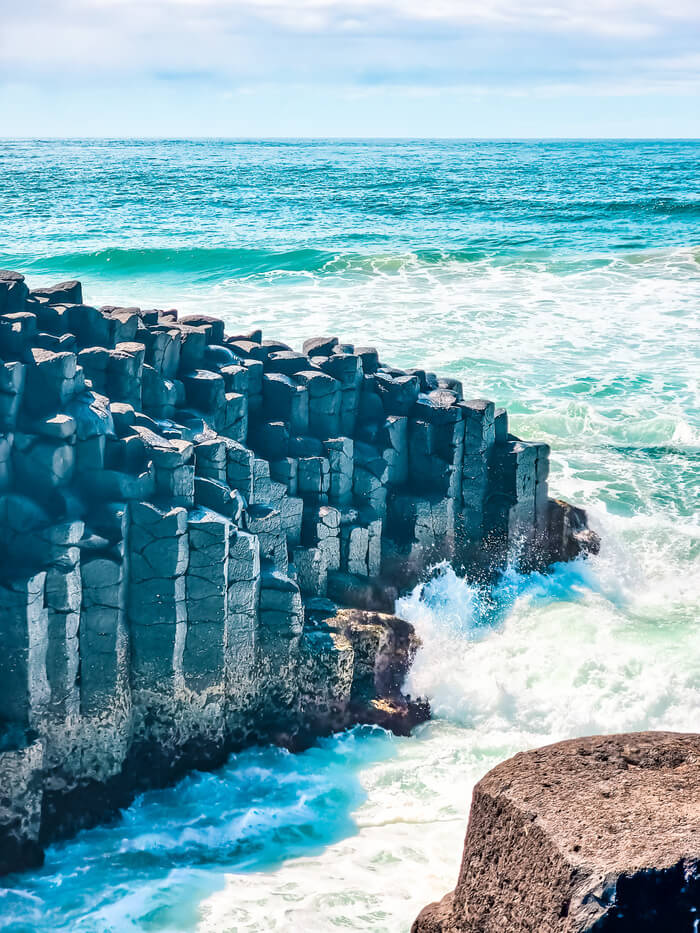 How To Get To Fingal Head Causeway

You’ll see the walking path that leads to the headland and Fingal Head Lighthouse. Follow this for about 5 minutes – it a 400 metre walk to get to the headland. It’s a lovely shaded walk through bushland to get to the Fingal Head loop. The walk is quite flat at the beginning but then there is a wooden boardwalk with a flight of steps near the end.

Look out for birdlife here -we saw a couple of kookaburras in the trees! 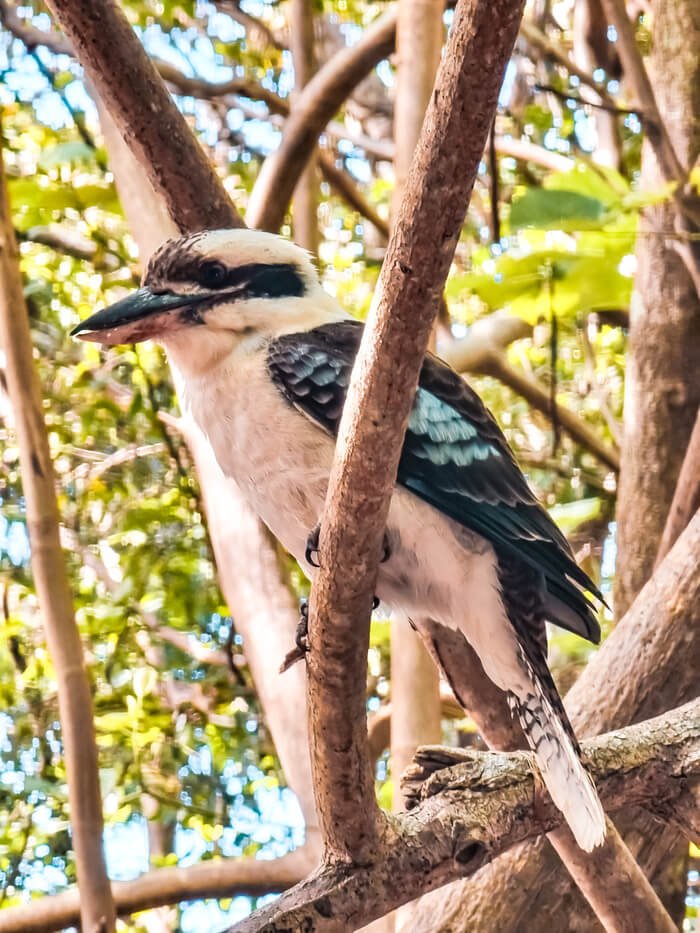 This walk takes you to the top of Fingal Head Causeway so you look down on it. 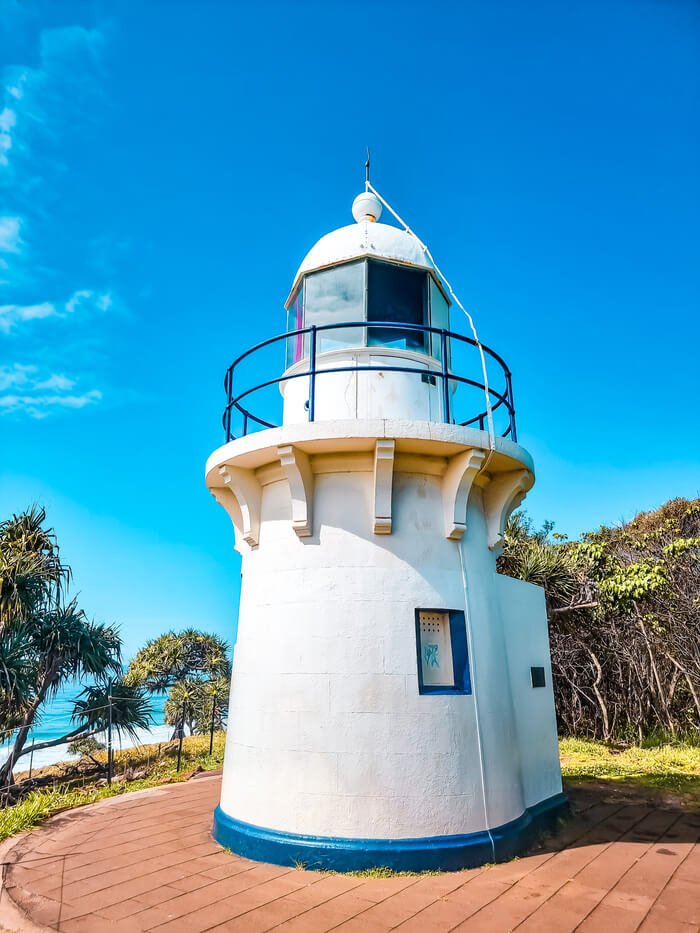 If you’re here on the headland during the winter months you might even be able to spot some humpback whales on their annual migration! 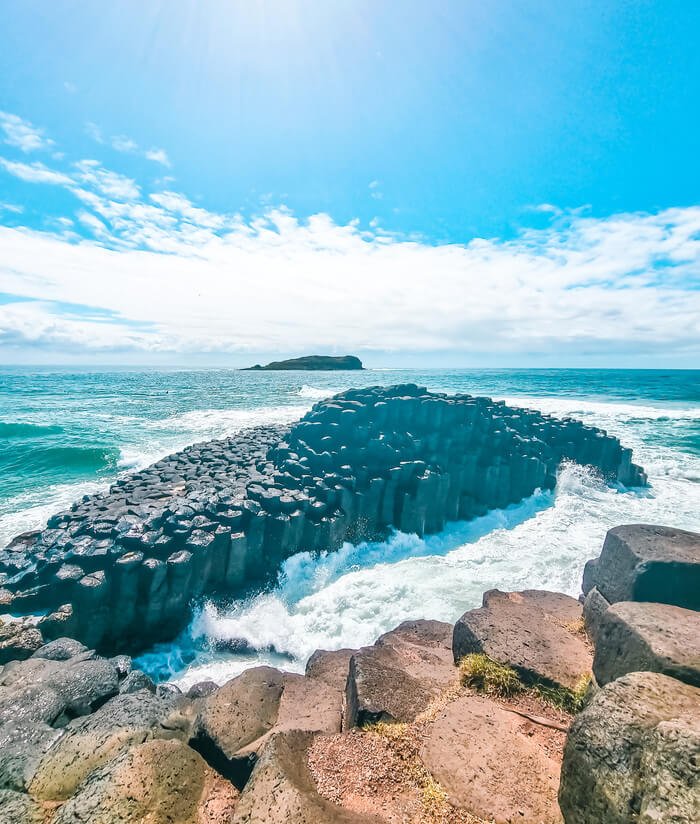 How To See The Fingal Head Causeway

Continue on down the Fingal Head loop and look out towards the sea and you’ll see the basalt columns. You can get down to be closer to the columns if you go down the little dirt path slope on the left hand side. Here you’ll get a better view of Fingal Head Causeway and nearby Cook Island.

You’ll then be able to see the water crashing against the columns a lot easier and see how they are separate from the mainland. You can get some really nice photos from here with Cook Island in the background.

Be careful as you are going down. It’s not advisable to go near the edge or try to jump across onto the Causeway as the waves crash against the rocks with a lot of force here.

Honestly, seeing the Fingal Head Causeway was one of the highlights on our NSW road trip. It was absolutely spectacular and we can’t believe more people don’t know about it! 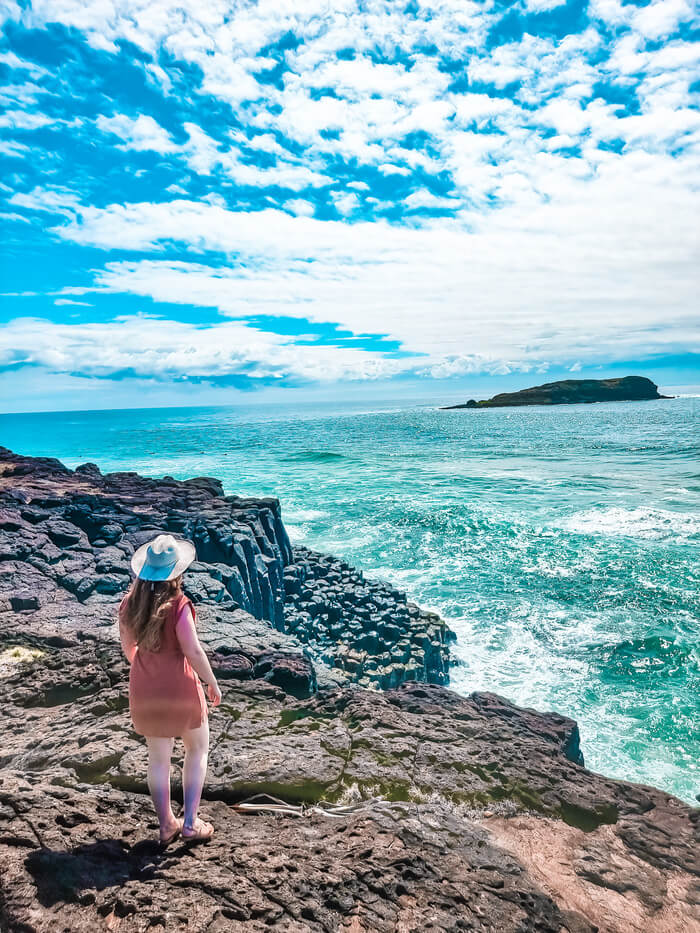 Voted the third best beach in NSW, nearby Dreamtime Beach is definitely worth a visit. You can access it via the bush trail that leads to Fingal Head – just look out for the turning for Dreamtime Beach. Rip tides and strong currents are common here so always be familiar with what to do incase you get caught in a rip, and never go out into the ocean alone.

Alternatively, you can see Dreamtime Beach from the lookout above on the Fingal Head loop walk as mentioned above. The long stretching golden sands are stunning from here. 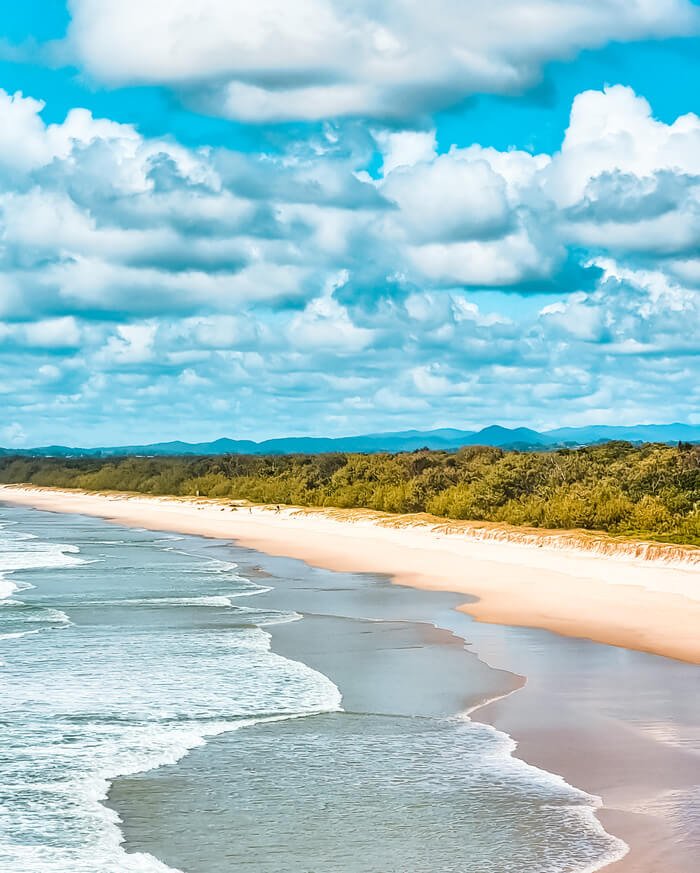 Fingal Head Beach has white sand and there are lots of lava rocks scattered across the end of the beach – many which broke off from the causeway and got washed into shore. You can get a nice view of Fingal Head Causeway from here if you visit at low tide. 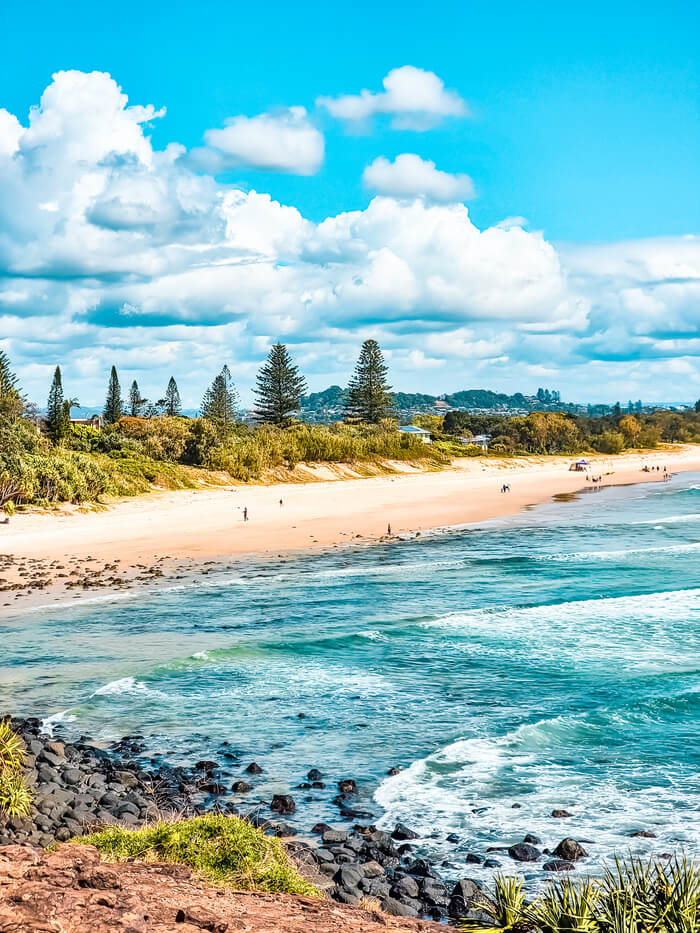 Things To Do Near Fingal Head

The Tweed River lies just behind Fingal Head and is a lovely place to relax.

Visit Boundary Statue in Tweed Heads/Coolangatta, located on Boundary Street. This statue marks the Queensland/New South Wales border. Tweed Heads is officially in NSW and Coolangatta in Queensland and are often known as the Twin Towns. 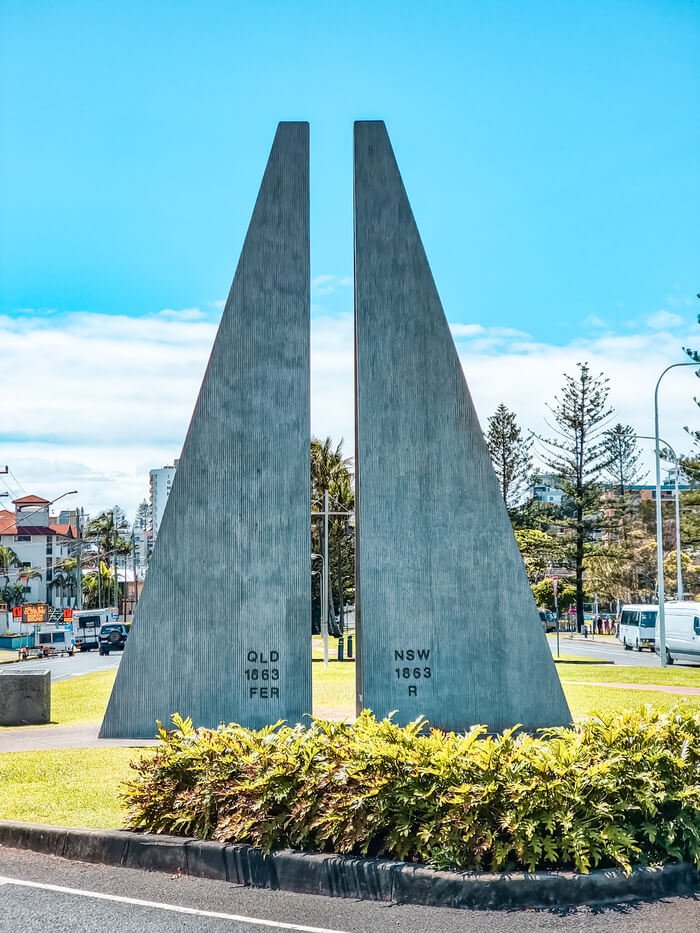 Get a photo of the Boundary Statue, with NSW on one side and QLD on the other. The statue is located next to a busy street but there’s plenty space to get a photo. There are lots of nice cafes on Marine Parade and beaches such as Coolangatta Beach, Greenmount Beach and Rainbow Bay Beach to enjoy.

There’s a cute rock pool at nearby Snapper Rocks too – all within walking distance of the Boundary Statue. Plus don’t forget the Coolangatta wall mural located on the side of The Pink Hotel! 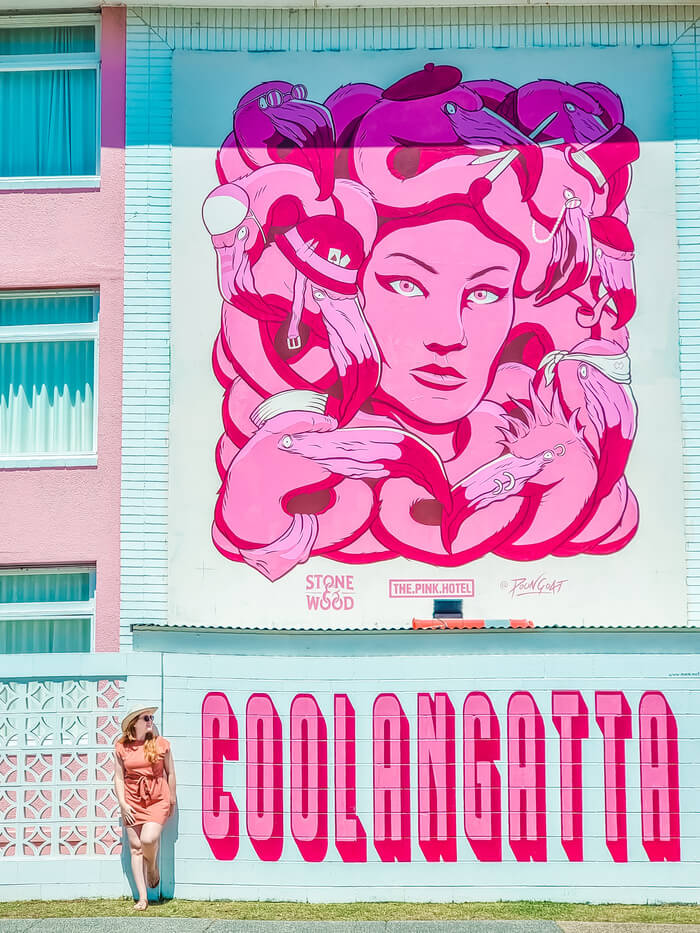 The East Coast of Australia is full of beautiful scenery, from stunning beaches to incredible waterfalls, cute towns, great hiking, ocean pools and more. There’s definitely something for everyone.

If you’re set on doing an East Coast road trip, check out these other travel guides to help you plan your trip!

Nimbin: Things To Do In Nimbin

Yamba: What To Do In Yamba

Seal Rocks: Top Things To Do At Seal Rocks

Great Lakes: Cellitos Beach – one of the most beautiful beaches in NSW!

Southern Illawarra: 14 Best Things To Do In Kiama!