Why you should never go barefoot in the airplane, embarrassing foot problems some Flight Attendants suffer with, and why do some people have a fascination with Flight Attendant feet?? Find all the answers here! 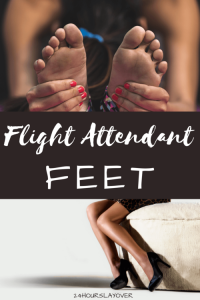 What a Flight Attendant thinks of passengers with bare feet

A Flight Attendant is always going to judge you if you are bare foot in the cabin. Simple.

I get it that you want to relax on the aircraft and of course taking your shoes off will make you feel more comfortable. But please remember to bring a pair of socks or slippers with you.

Nobody wants to see your hairy toes. Not only are they gross but it is very unhygienic going barefoot in an airplane. The amount of germs in the aircraft is insane.

A Flight Attendant will ESPECIALLY judge you if you go to the lavatory in your bare feet. Trust me do not do it. The floor only gets cleaned properly at the end of the flight, so imagine how dirty it will be after a 14 hour flight and 100 passengers using it.

Not only is the lavatory floor full of germs, but the liquid you see on the floor is almost always not water, but in fact pee. Always put on your shoes when you go to the lavatory in the aircraft.

Also remember Flight Attendants are often going through the cabin doing meal services, so bending down to get things out of the cart a lot.

Therefore they will often get very close to the feet of the passengers sat in the aisle, and the last thing they want to look at when they are serving food is some crusty cracked feet or toenails with fungus on wiggling about.

Plus if the feet smell it will be most unpleasant for the Flight Attendant during the meal service.

Do Flight Attendants have bad feet?

Many  Flight Attendants have bad feet as they spend a lot of time wearing heels. Some will get bunions or corns as a result, and they believe wearing their heels at work has irreversibly done damage their feet.

Lots of Flight Attendants also suffer from the embarrassing problem of having smelly feet after operating a long flight. They are constantly walking up and down the cabin which can make the feet sweat and become smelly.

Whilst many workers in different jobs who are on their feet all day may also suffer from smelly feet, for Flight Attendants the issue often can’t be hidden as they will take their shoes off when they go on their crew rest.

The Crew Rest Compartment is the place where Flight Attendants go to to have a lie-down and rest during a long flight.

It is a very small area with all the crew bunk beds packed tightly together, so if someone has smelly feet it is likely the whole Crew Rest Compartment will start to smell.

How can a Flight Attendant prevent bad feet odours?

– Put a big used coffee sachet used for brewing a pot of coffee onboard inside the shoes when on crew rest (put it inside a bag first obviously so it won’t get your shoe wet).

Looking for information on Flight Attendant Requirements? Check out these articles:

People who have a Flight Attendant Foot Fetish

There are some people out there who have a foot fetish: in particular for Flight Attendant feet.

Foot fetishists will find Flight Attendants on social media and send them a message saying they will pay the Flight Attendant money in exchange for their used/worn stockings, underwear or cabin shoes yikes.

Some Flight Attendants even advertise them on platforms such as eBay or other market selling websites themselves.

If you’re looking for help on applying to become a Flight Attendant and the Application Process check out these guides: 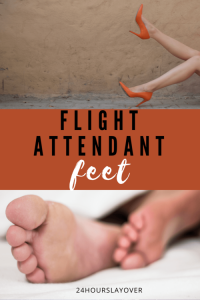 How about setting up a web site where flight attendants could connect with foot fetishists and they could find someone to give them foot massages and feet TLC on their layovers. The users could rate each other and build up reputations for trustworthiness and reliability.

I should like, you can send to me images of air hostess feet. Thanks you.